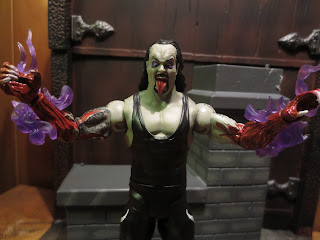 It's October 1st and the air is getting a bit chillier, the leaves are changing colors, black cats are crossing your path twice as often as before,and there's a masked maniac in every bush! You know what that means! It's time for 31 Days of Toy Terror! This year is the fourth installment of Hokey Halloween Horror as, besides last year's inaugural craziness at Action Figure Barbecue, I also previously did two years of it fun Halloween stuff (2013 and 2014) over at The Epic Review. This year join me for 31 Days of Toy Terror Lives: A review of some phantasmagorical plaything every day in October. I have a mixture of new stuff and some classic stuff you might remember from your childhood. I always have a blast selecting cool horror based stuff from my collection to review and I hope it all gives you nightmares. I really do! Today I'm starting with a look at the Deadman himself, the Undertaker! Well, not just any Undertaker, though: This is the zombie version of the Undertaker from Mattel's new WWE Zombies line. Yes, you heard me right: Zombie. Wrestlers. This review basically wrote itself. Enter my Crypt of Collecting and learn more about this terrifying toy after the break... 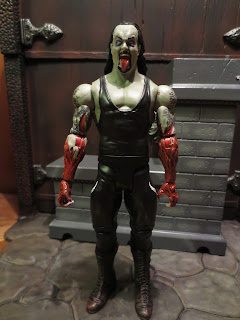 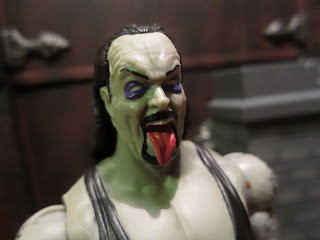 * I love this headsculpt. When I saw it I was immediately reminded of the Undertaker's mocking of Brock Lesnar at SummerSlam 2015 even though he has made this exact face fairly often over the years. I love the expressive look here. In the world of WWE Zombies, the Undertaker isn't just a zombie: He's a powerful revenant of some sort with unspeakable powers. He has every right to be cocky. 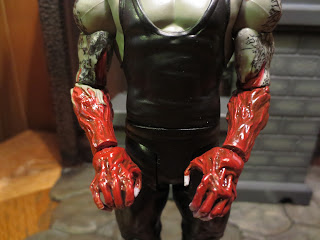 * So yeah, this is a zombie Undertaker...OH MY GOSH LOOK AT HIS ARMS!!! Can you believe this? Is his flesh completely ripped off and he's growing giant claws like a Crimson Head from Resident Evil? This is amazing. Mattel went full out on the detailing and paint here. Taker's arms actually look raw and bleeding and there's strips of ragged flesh hanging down. I love it! 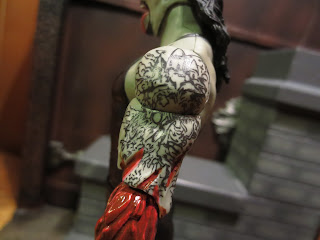 * Besides the awesome zombie details the Undertaker also has some cool tattoo designs on his arms. The printing on these is excellent (as always seems to be the case with Mattel's work on the WWE line) and they add some spooky spice to the character. 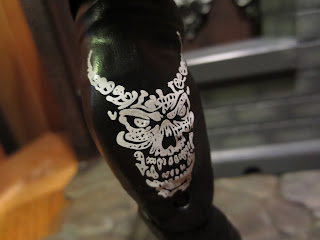 * On both sides of the Undertaker's legs is a cool stamp of some horned creature. Terrifying! 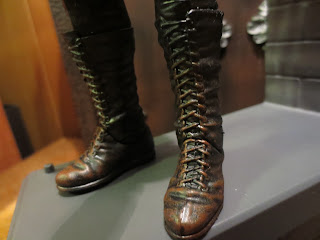 * Typically wrestlers are nice and clean. Yeah, you might have someone like Luke Harper who wears a grungy looking shirt, but overall wrestlers are pretty polished and the paintjobs on the toys reflect this. Not these zombies, though. Taker's boots are covered in mud from a walk through the graveyard. I love it! What a cool detail to add on here. 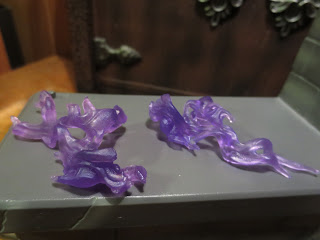 * Ready for something incredible? The Undertaker comes with two purplish-blue surges of necrotic energy! How incredible, right? As far as I know this is the first Mattel WWE figure to include an energy effect, something I love to see on action figures. These are really neat and they escalate the zombie Undertaker figure to a new level. 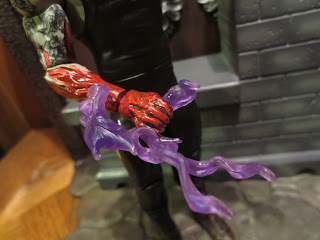 * The only problem with the Undertaker's energy flares is that they don't really seem to be designed to fit around his forearms in any special way. You'll have to really finagle them or have him grip them to get them to stay on tight. Otherwise, they'll just fall off and cause you lots of heartache. 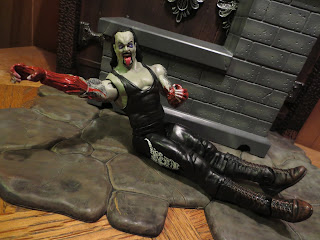 * The zombie version if Undertaker is built like any number of basic Mattel Undertaker figures out there. The articulation in the arms is good and the legs are more limited than the Elite series figures, so you know what to expect here. What's a bit disappointing, though, is that the Undertaker's hips don't allow him to fully sit up erect. How cool would zombie Undertaker doing the sit up be? 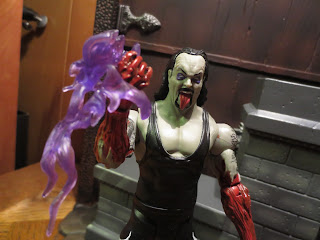 This guy is awesome and is really a great kick-off to 31 Days of Toy Terror. He's an even spookier rendition of an already spooky character that just really works on a concept and design level. I flipping love those ripped up forearms and the crazy headsculpt. I love the necrotic energy, too, although I do wish that they fit a little better. Still, zombie Undertaker is an excellent toy and well worth adding to your collection if you like zombies, the Undertaker, or necrotic energy. If you like all three of those things, he's a definite by and you and I should become Facebook friends.

Keep checking back here every day in October for more Toy Terror! Also, make sure to check out the Toy Bloggers United contest being hosted here this month! For more 31 Days of Toy Terror, check out my Hokey Halloween Horror page for spooky fun from 2016 and years past!
Posted by Barbecue17 at 10/01/2016