Action Figure Review: Spinnerella from Masters of the Universe Classics by Mattel 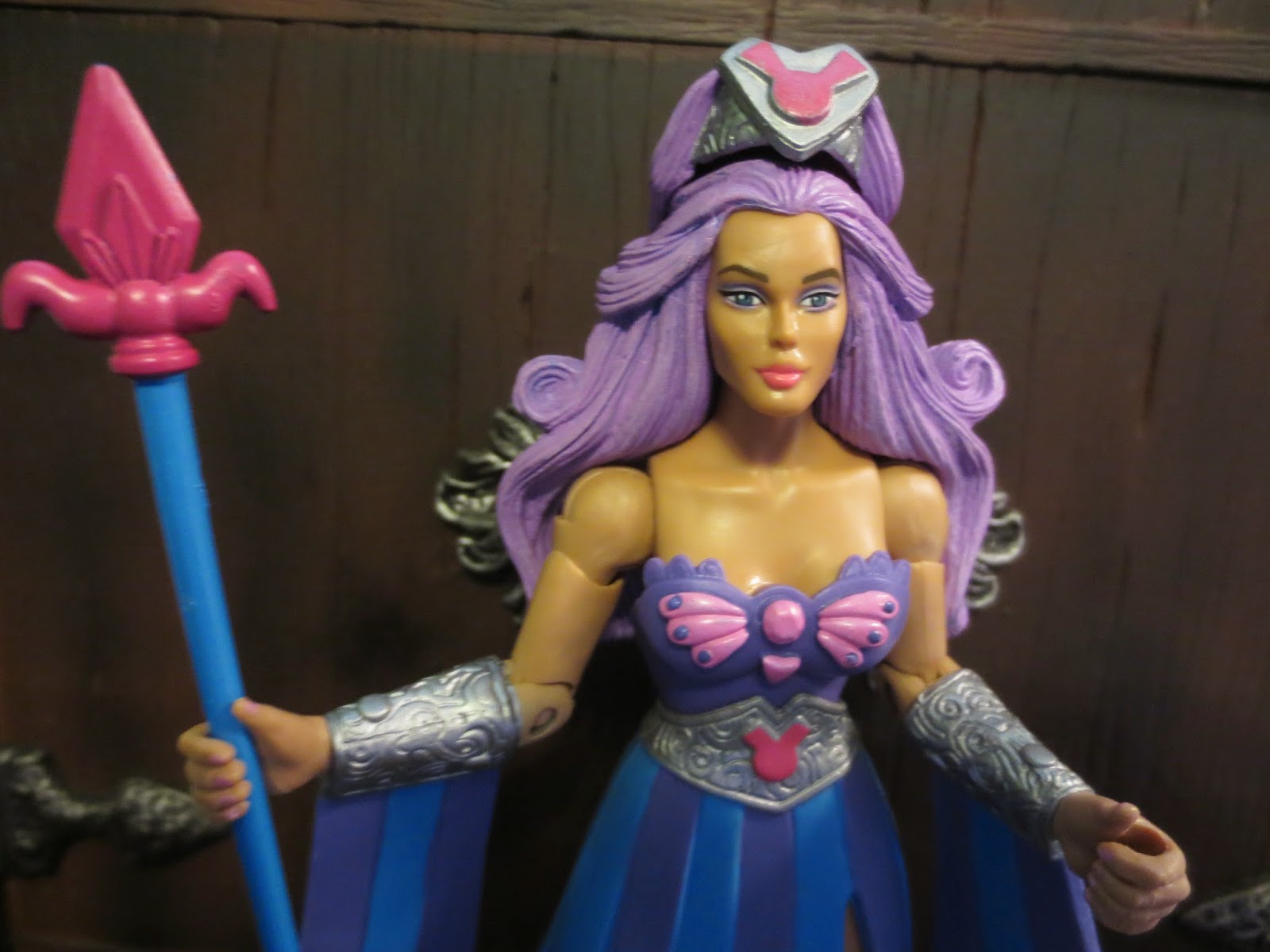 Spinnerella finishes out the 2014 Princess of Power mini-sub by giving us another vintage POP figure; now we only need Angella, Peekablue, and Perfuma to complete the vintage lineup! Interestingly, Spinerella was sold as a deluxe figure and cost a bit more than a basic figure in this line, supposedly because of the tassels hanging down from her arms and her elaborate hairstyle. I'm not sure that I'm really feeling the deluxe vibe here (Mermista feels more like a deluxe figure), particularly because her costume doesn't seem that much more elaborate than any other figure wearing more than a fuzzy loincloth. Anyways, let's take a closer look at Spinnerella, shall we? Join me after the break... 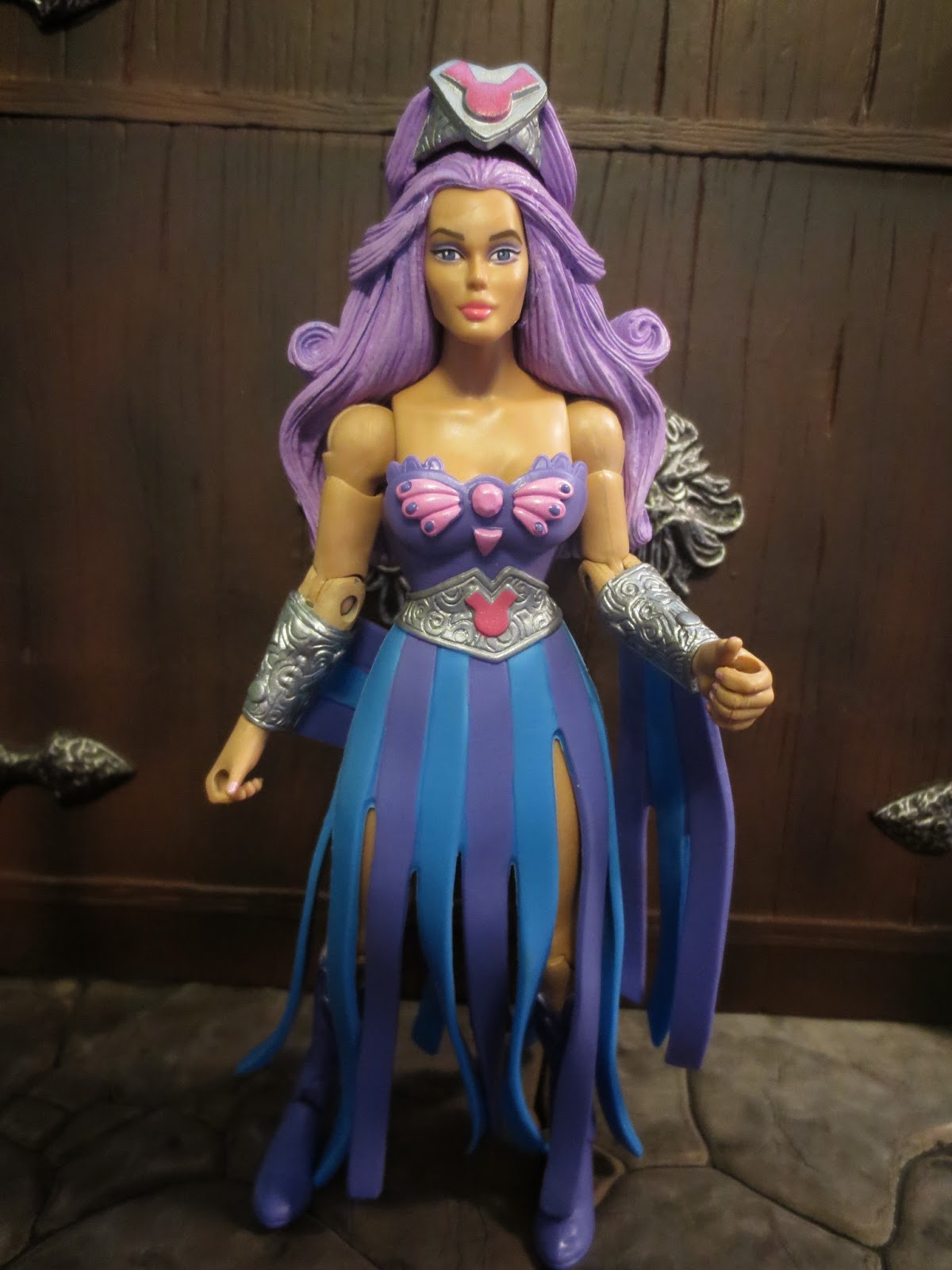 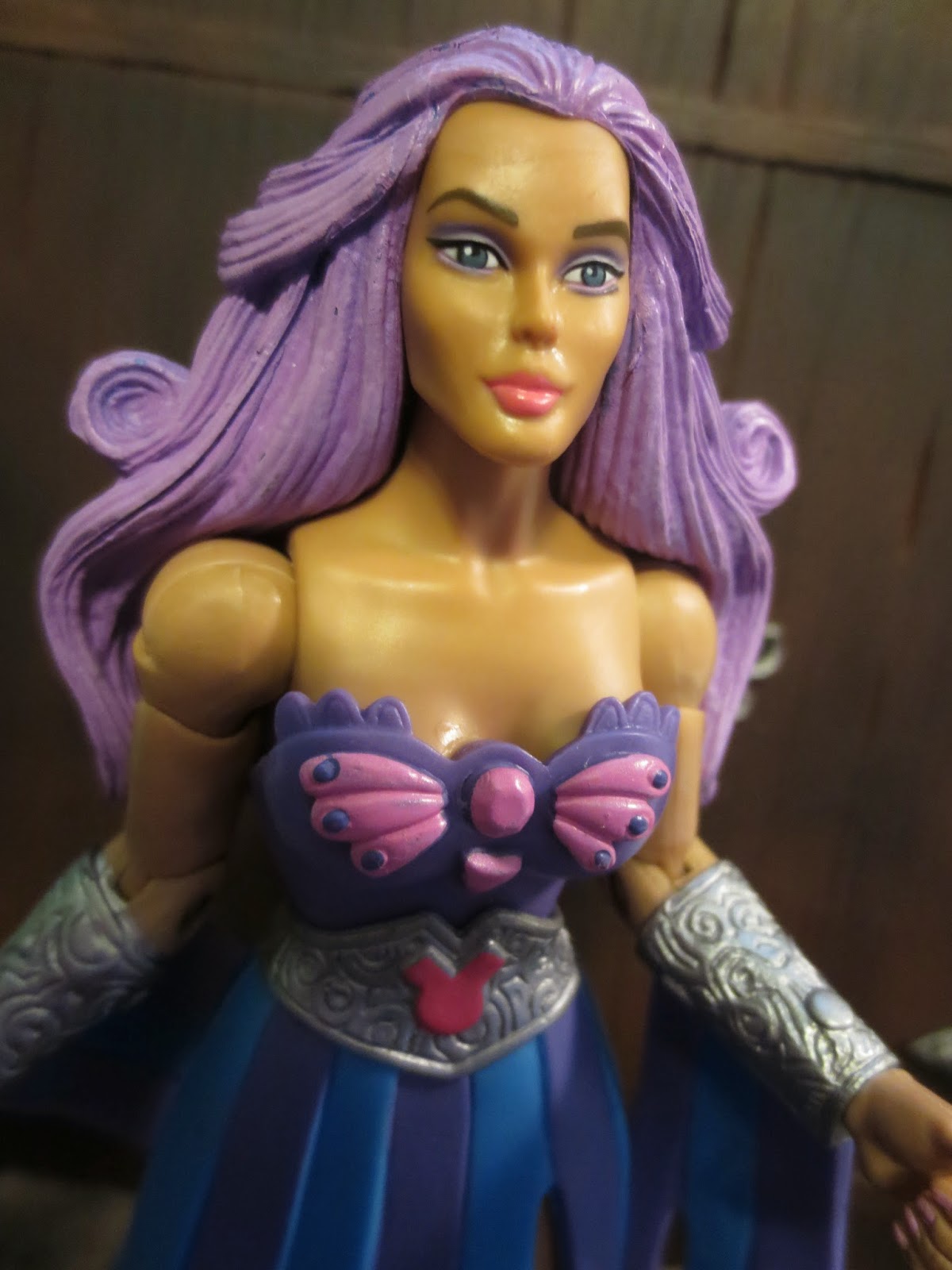 *Spinnerella has a lovely face! The paintwork on her eyes is extremely well done. I like the purple, blue, and pink color scheme for the figure and how it all ties together with a little bit of silver. The non-flowing parts of her outfit look excellent as there are a variety of sculpted details and a few different paint applications to enhance her colorful aesthetic. 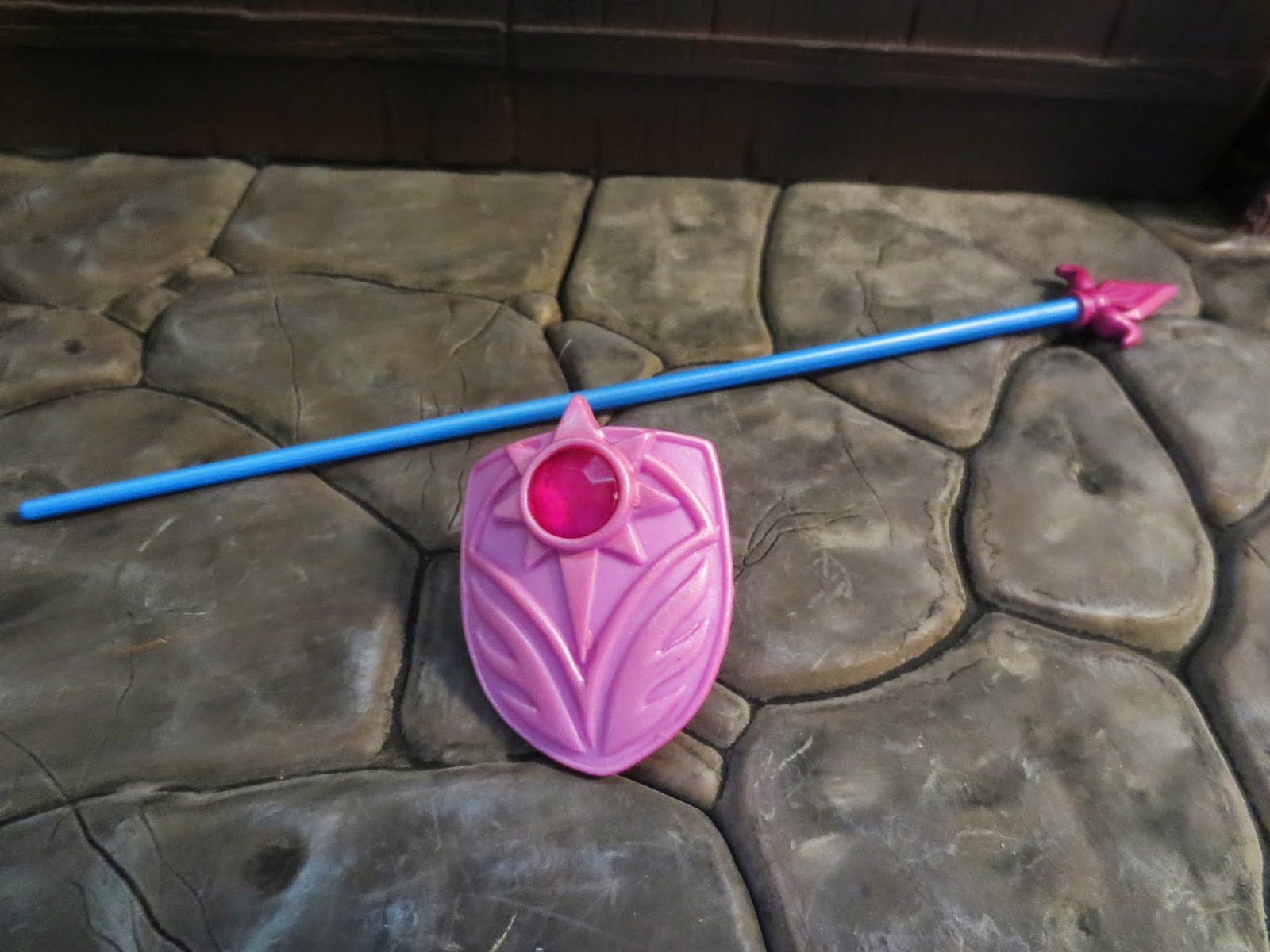 *Spinerella is armed with two combat accessories: A spear and a shield. The shield is the same mold that has been included with pretty much every other POP female but it does have metallic pink highlights on the front. The spear is a very cool accessory, though. It has a interesting design for the tip and Spinnerella looks great holding it. 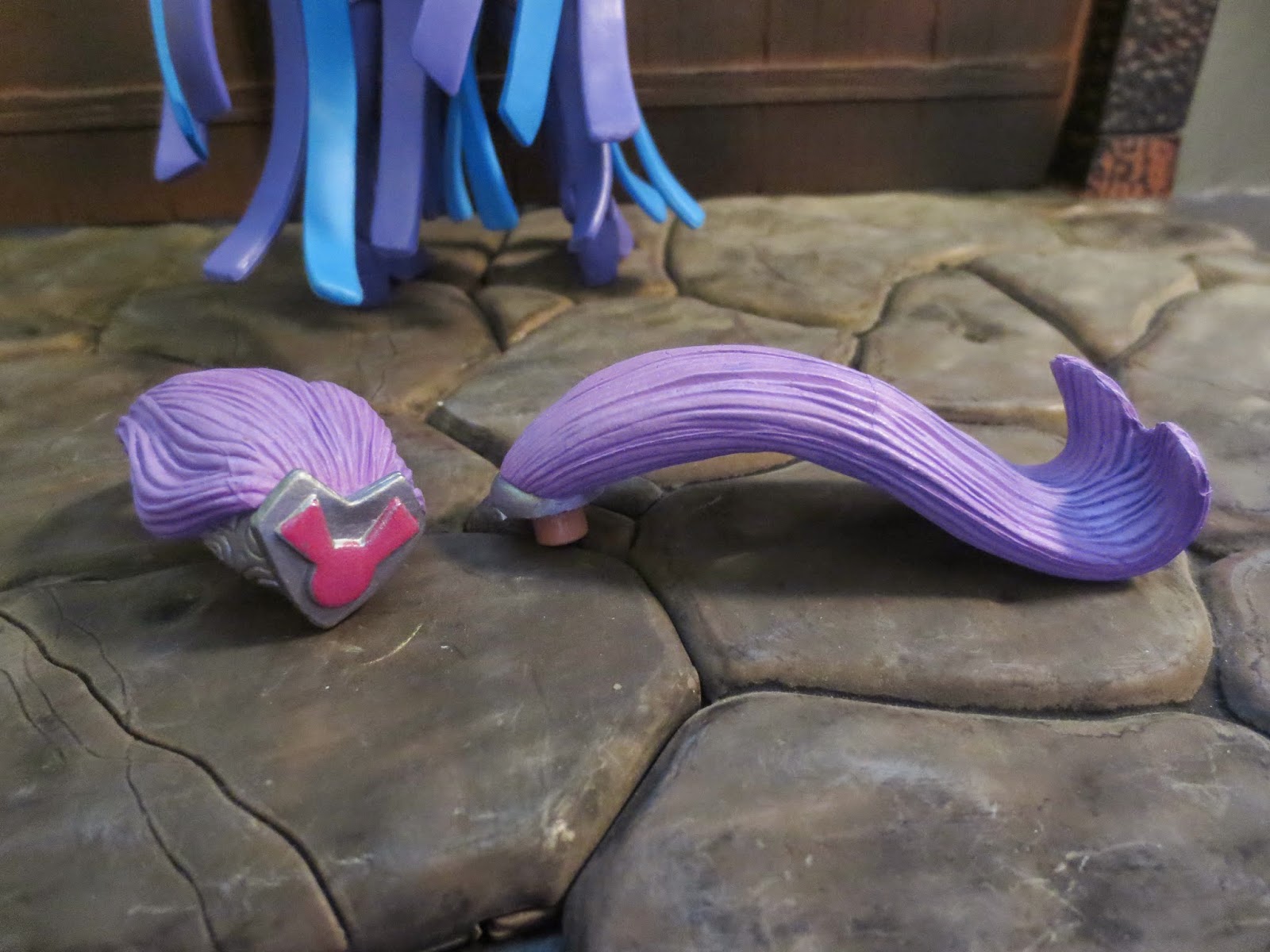 *Spinerella has a removable ponytail and a crown that can attach to her hair. The vintage Spinnerella had a crown on her head while the Filmation character model didn't, so this is Mattel's way of giving fans the option for either look. I think it looks great. I wouldn't have missed it if this wasn't included, but I appreciate the effort. 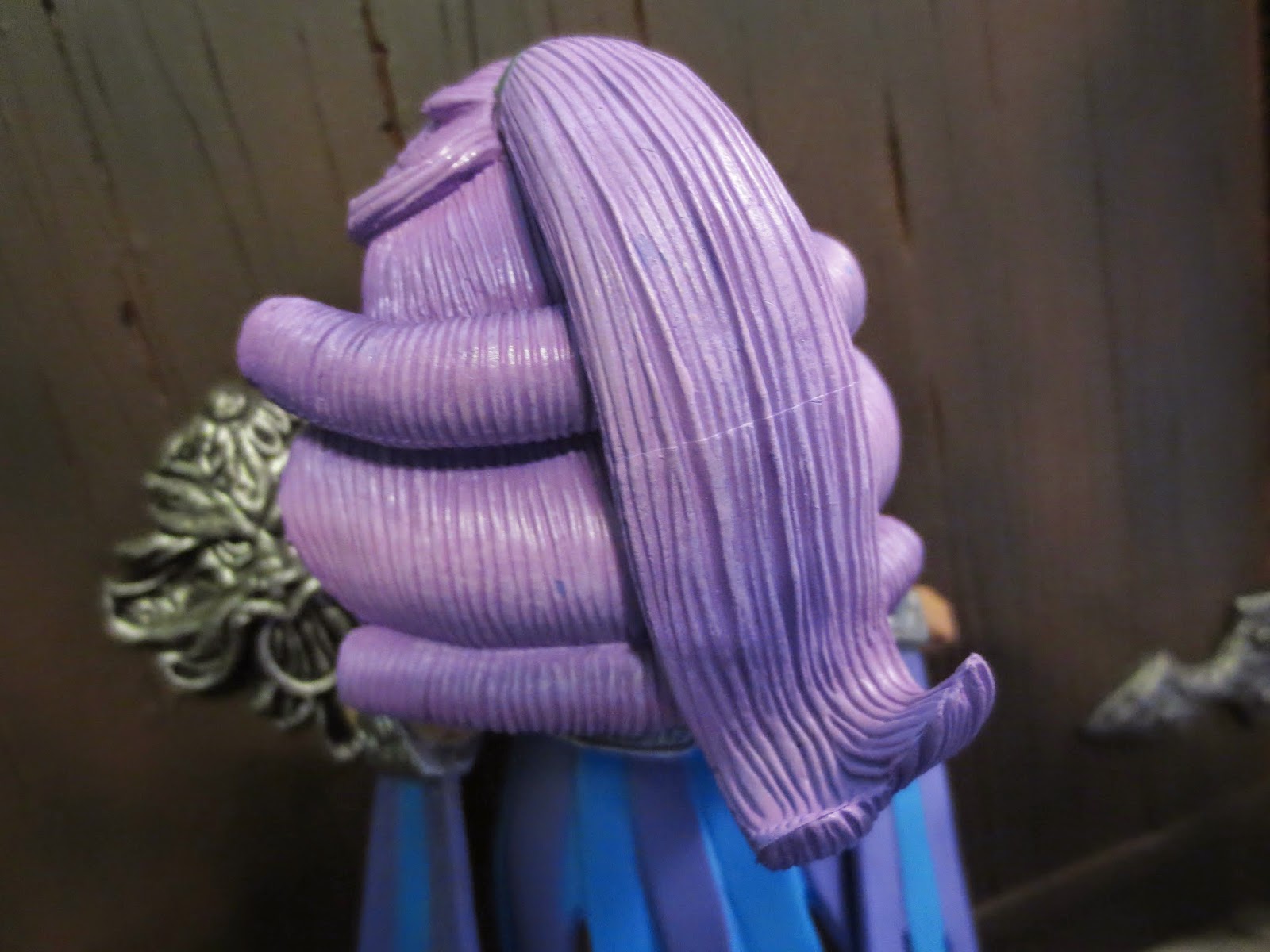 *Spinnerella has some truly epic hair. I mean, look at those flowing locks? I wonder how long it takes her to get ready in the morning? Her hair does have a darker wash on it to give it some texture which helps bring out the finer details. In this picture, I've got the ponytail attached but not the crown. The crown hairpiece is kind of like a ring that ponytail holds in place. 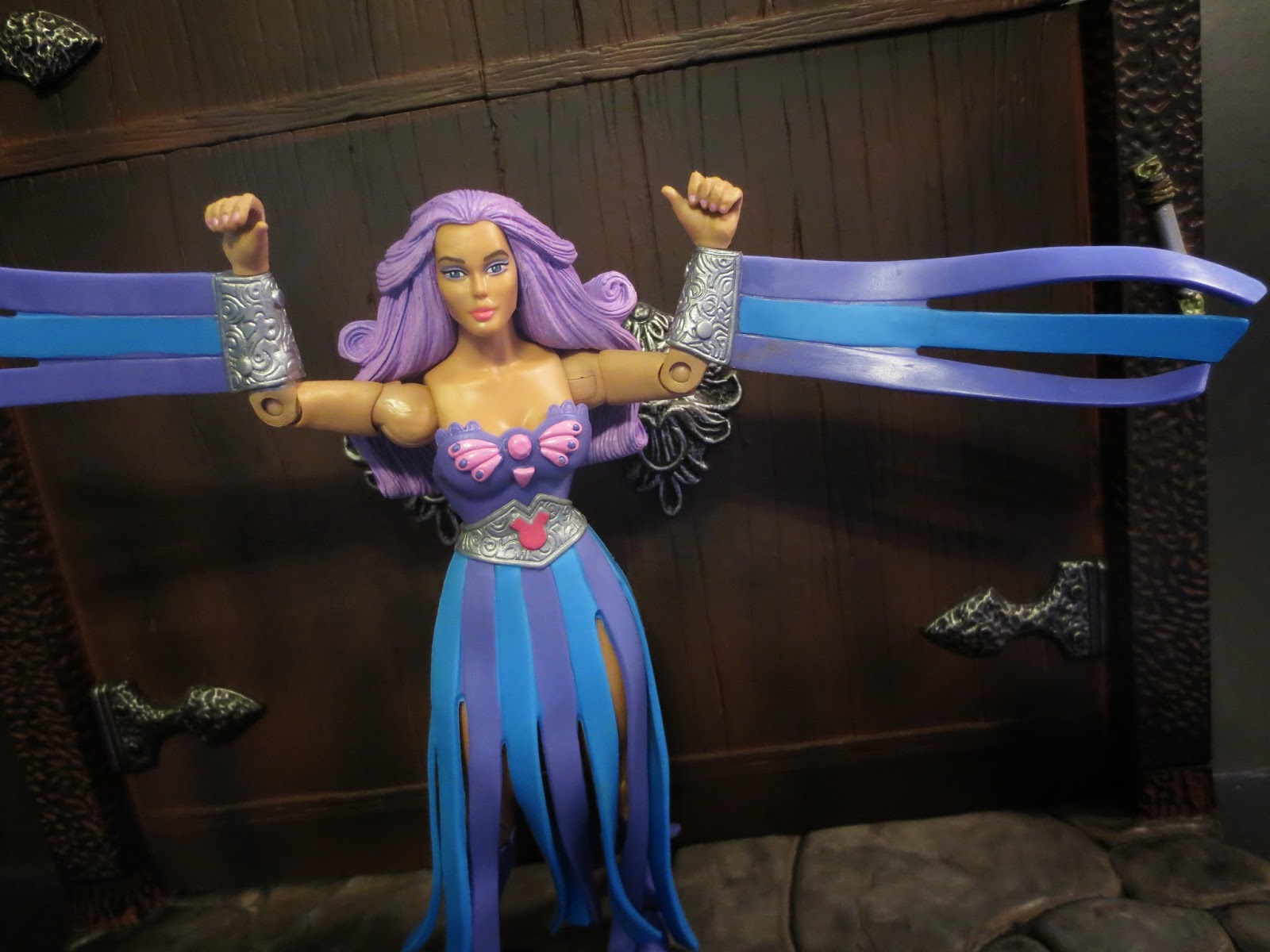 *Spinerella's name is derived from the fact that the vintage figure came with a spinning platform which caused the fabric tassels of her outfit to fly about when she spun. The MOTUC Spinnerella's tassels, however, lack the grace of her vintage counterparts. These just look gloppy and messy. The paint work is uneven here, too. 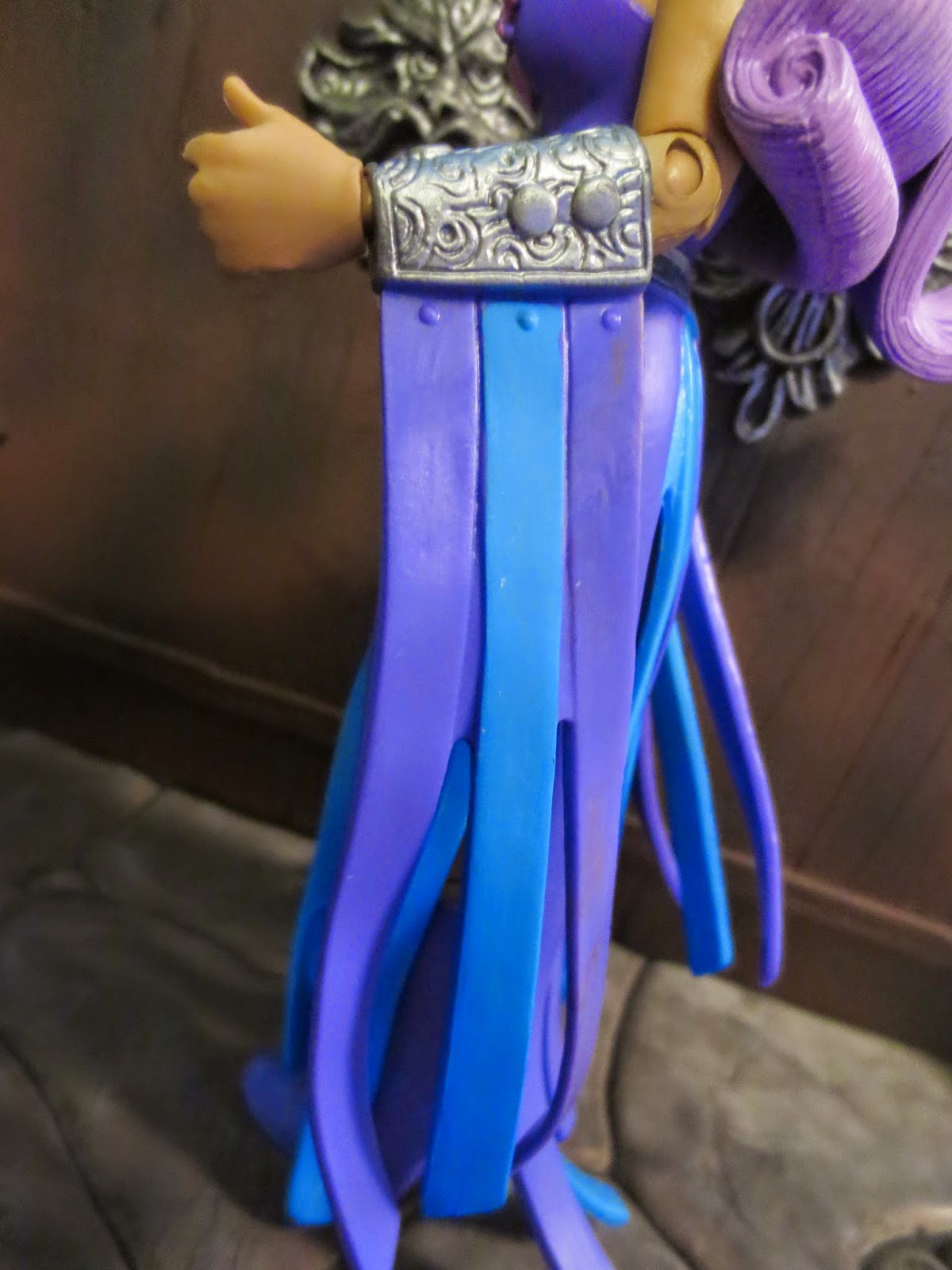 *They're also molded from a rather hard material and thus they look funky whenever her arms aren't facing down. If they spun independently (perhaps if she has a swivel join on her forearm before the elbow) then I wouldn't be so down on these, but as it is Spinnerella is pretty much doomed to be left in only a few poses. This is a problem that affects many action figures with hanging cloth (including many Jedi and Sith Lords), but offering her as a deluxe figure I had hoped Mattel would have figured something better out. 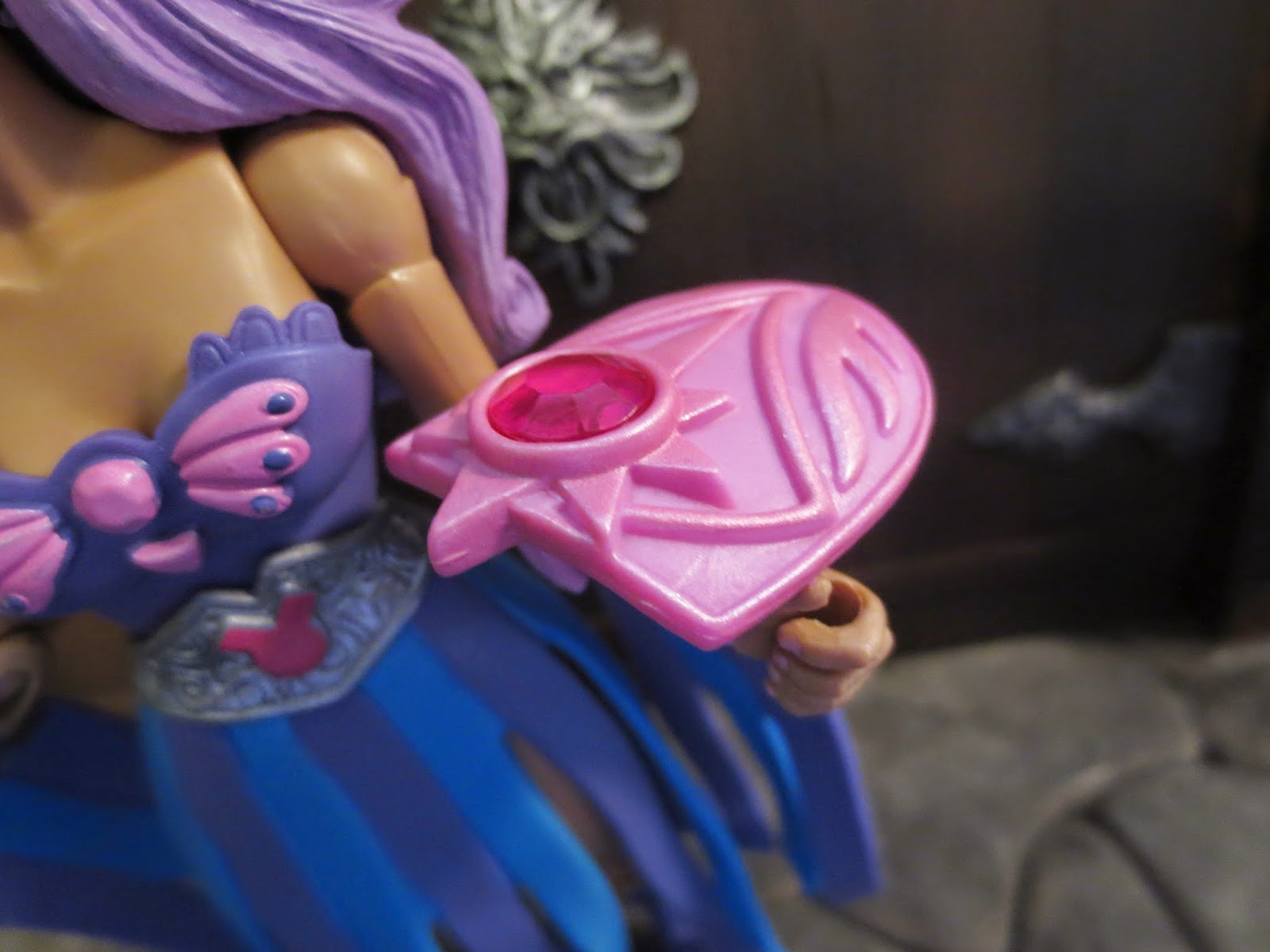 *Minor gripe, but still a gripe: Because of the arm tassels, there is no legitimate way for Spinnerella to hold her shield. It can rest on top of her forearm, like in the picture to the right, but that just looks really, really weird. One of Barbecue's Action Figure Commandments states: "An action figure should always be able to properly hold their included accessories." 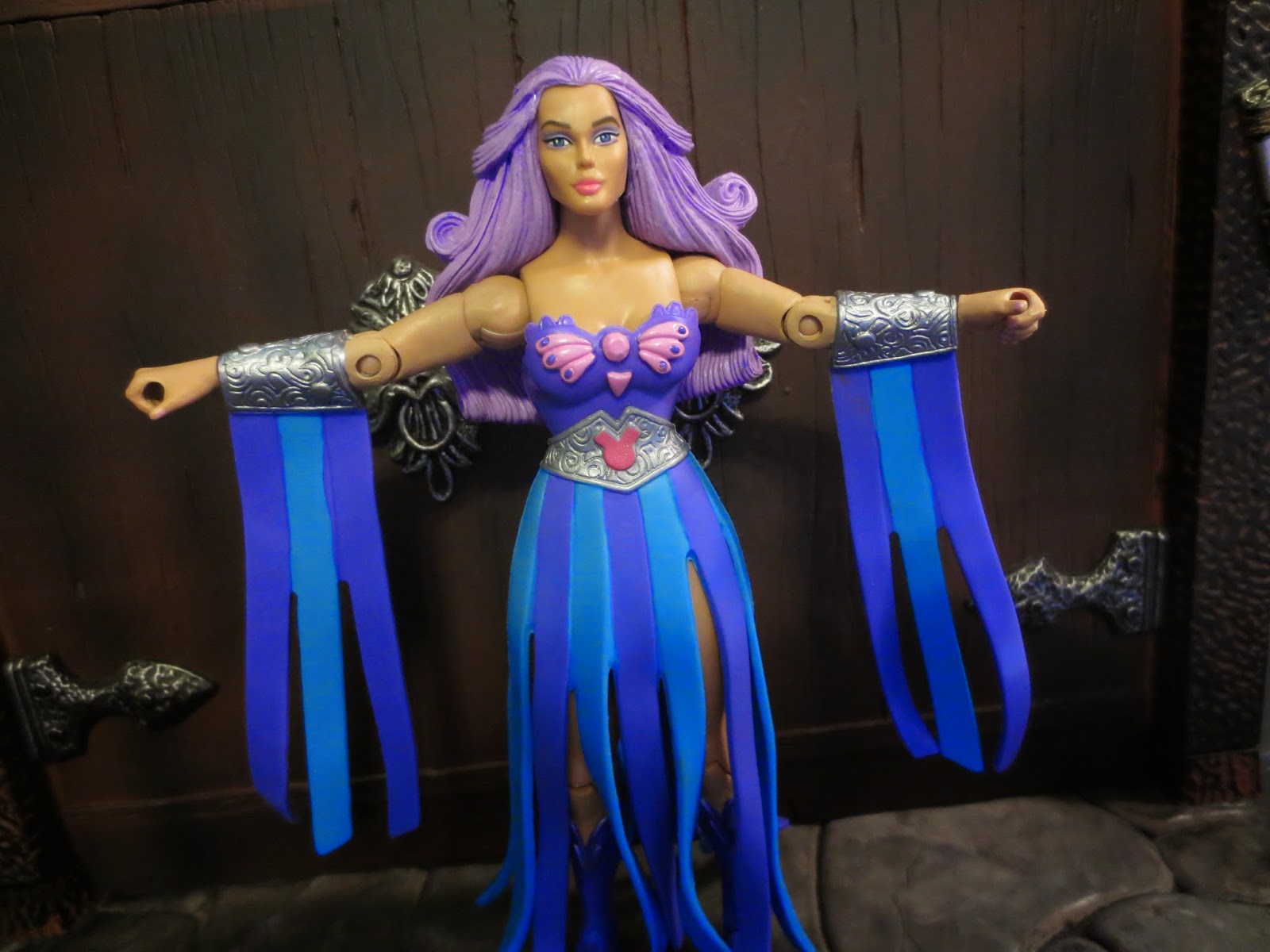 Spinnerella has some really good features but she's also hampered with some poor design choices that unfortunately make her far less fun than she should be. I'm not going to say she's a total failure as she looks good when in one or two poses, but she's just not as versatile as I would have liked. She also doesn't feel like a deluxe figure. At the end of the day I'm giving her a Good. She's still fun, well made, and has some cool features, but she could  have been a whirlwind of a toy.


Check out the rest of my MOTUC reviews if you're into that sort of thing: