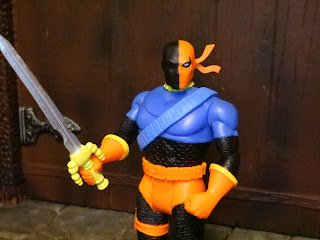 This isn't a "Wrapping Up 2022" review at all: It's a brand new for 2023 review! Just a week or so ago I saw that folks were finding the newest series of McFarlane Toys' Super Powers line, a tribute to the 1984 Kenner classic toyline, and I made a trip to Walmart. I was amazed to find full cases of the three series 3 figures (Deathstroke, Wonder Woman, and Nightwing) and snatched them all up. I didn't review any of the Super Powers figures last year as I wasn't sure how long the line would last but now it seems to be doing a lot better and the figures of both series 2 and series 3 are more impressive than series 1. Deathstroke was originally planned for future inclusion in the vintage Super Powers line but he never made it; the line was cancelled in 1986 and only the third series was produced. The McFarlane Super Powers version of Slade looks quite a bit like the proposed Kenner version, though McFarlane's figures don't have any action features. This is a great looking figure of Deathstroke, a character who almost always looks fantastic no matter what he's wearing. The dude just has incredible costumes, doesn't he? Let's take a look at Deathstroke after the break... 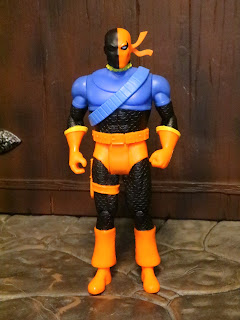 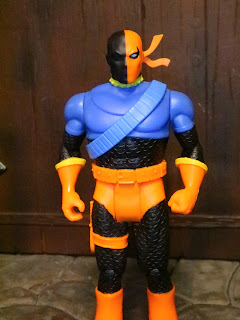 * This is an excellent, classic looking version of Slade Wilson and the colors of the figure really just pop. The blue and orange of his outfit is eye-catching and toyetic, sure, but not so much as to make Deathstroke look too over the top. This is still a pretty grim looking version of Deathstroke the Terminator, even if he is under 5 inches tall. Retro figures can be tough to get right but I think McFarlane did a nice job capturing the look of a Kenner figure from the mid-late 1980s and I could see this guy fitting in perfectly with a vintage Super Powers line. 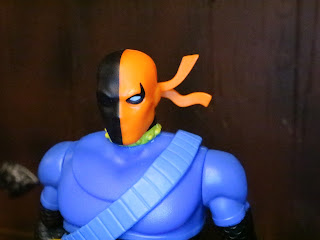 * The headsculpt looks really cool and captures Slade's divided orange and black mask nicely. The paint is sharp and crisp on the white out eye and there are bandanna-like tails streaming from the back. 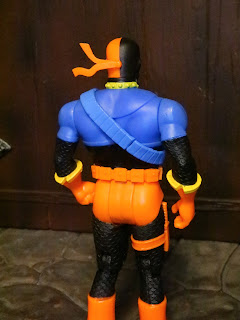 * The sculpted detail is really good on the back as well. You can really appreciate Slade's armored collar, the bandolier he wears, and the pouches on his utility belt. He's also sporting chainmail with sculpted links on the black parts of his armor. 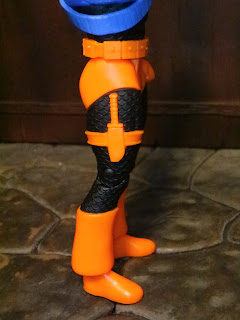 * While I'd usually complain and whine about a non-functioning knife and sheathe, stuff like this was actually pretty cool back in the 1980s and this is a nice sculpted detail for the figure. He's also sporting the big, floppy pirate boots, so hooray for those. They look fantastic! 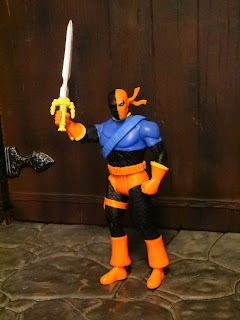 * Since this is a tribute to the vintage Kenner line (and one designed to fit in with them for the most part), the articulation is what the Kenner figures had: Swivel hips, swivel shoulders, a swivel neck, and hinged knees. The hinged knees definitely set Super Powers apart from most other Kenner lines as it allowed for the figures to better sit in vehicles. The quality is fantastic here and Deathstroke is nice and sturdy. 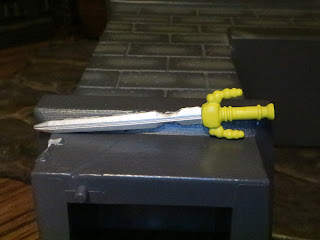 * While Deathstroke is usually toting around a one man arsenal, this version only comes with a sword. It's a very cool sword, though, with a silver blade and a yellow handle and hilt. It fits very securely in Slade's right hand. 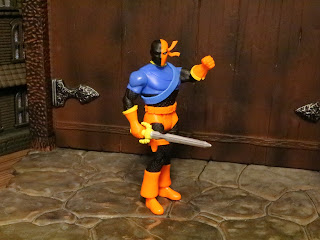 I'm loving Deathstroke and I'm quite excited to see where McFarlane's take on Super Power goes. I only ever owned two Super Powers figures (the Flash and Hawkman), though I owned more of the Toy Biz DC Comics Superheroes line, so my nostalgia for this line isn't as crazy high as it is for some but I love the cleanness and simplicity of the figures. While McFarlane seems to be pulling from different looks and different looks, this is a great, very classic take on Deathstroke. No action features in this line for that $10 price point, this line is working for me. Deathstroke gets a Great and a 1/2 from me.