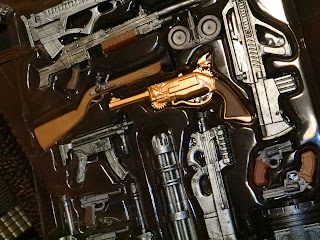 Last year McFarlane Toys released a very cool accessory pack, the Munitions Pack, that was filled with 17 different firearms for your 1/10th scale McFarlane action figures. It was a nice assortment of figures that nicely complemented the Spawn line as well as added some needed firearms to McFarlane's DC Multiverse line. Since Warner Bros. has a ban on their products coming with guns (even though they can use them in movies, television, and in comics), this is a great way to supplement figures who need these weapons to feel complete. That set sold out quickly, so I guess collectors were eager for these weapons. A second set just shipped out this month and it's loaded with 17 more weapons to equip your figures with. This one's called the Accessory Pack #2 and has a mixture of more realistic firearms and some futuristic firearms. It's a fun collection that ships directly from the McFarlane Toys Store. It's a new year and this release ought to keep your collection fresh and armed for 2023, so let's take a look at this instant armory after the break... 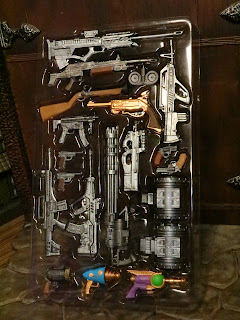 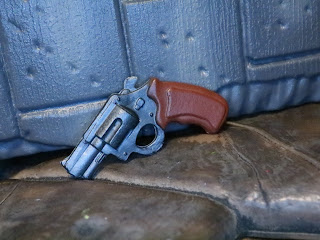 * Let's start small with a snub nose revolver. Easily concealable, beautiful in its simplicity, and a great fit for gangsters, detectives, and any figure just needing something they can keep hidden away but at the ready. 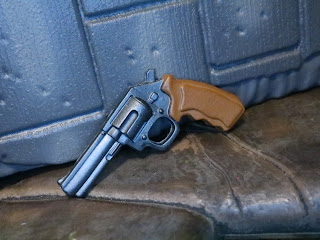 * Next up is a full sized revolver. The sculpt is really nice here, too. Very crisp and sharp with a neat and clean painted grip. It's a classy looking gat and could probably equip a Joker figure nicely or serve as a good sidearm for Sam. He only comes with a Tommy gun, so this could fit him nicely. 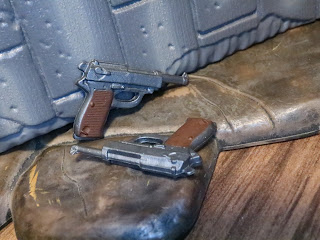 * The only automatic pistols in this set are a pair of Walther P-38s, a pistol that has appeared in hundreds of World War 2 films, TV shows, and video games. It's an older styled pistol but it looks quite nice and is very recognizable. Does anyone know if these are intended for anyone specific? 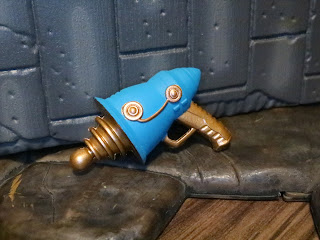 * Next up is a very retro sci-fi ray gun with a fantastic aesthetic and a great blue and copper color scheme. This is an excellent piece and I think it might make for a nice B.B. Gun for the recent Blue Beetle figure. 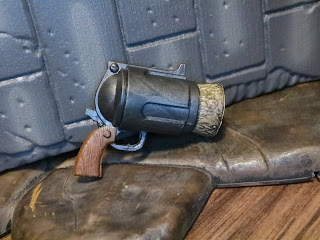 * This gun is definitely recognizable: It's a giant pop-gun with a massive cork in it. Who do we know who carries a pop-gun like this? Yeah, this is totally for a Harley Quinn figure. Now, we just need some comic based Harley Quinn figures in DC Multiverse. 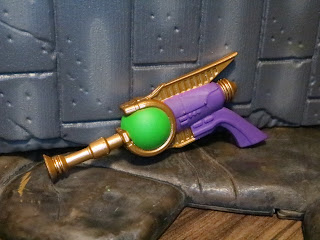 * Here's another ray gun with that same fantastic retro sci-fi aesthetic. It's purple and bronze with a green orb in the center which perhaps as some sort of fuel source or tank. Maybe it's an acid spraying gun for the Joker? Or a Kryptonite ray rifle for Lex Luthor. 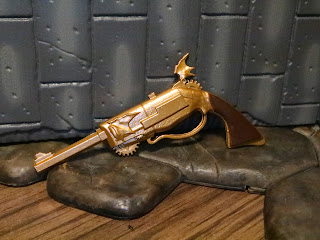 * Here's another crazy pistol. It's quite large and has a steampunk vibe to it. Maybe a bit of a western feel, too, with the spurs on the front and the revolver like design. I'd heard from a number of folks that this is intended to go with Frankenstein (who just got a new Megafig) and, looking at some pictures, I think they're right. It's definitely designed for a larger character. That gold looks great and the detail on this is just really cool. I bet this baby packs a mean punch. 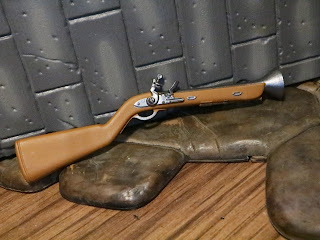 * Have you ever wanted a blunderbuss for your action figures? This is a really cool model of a weapon that is definitely a bit more unusual.  This is another weapon that's creeped in this set and meant for Frankenstein, too, but it could also just be something cool for Gunslinger Spawn to use. 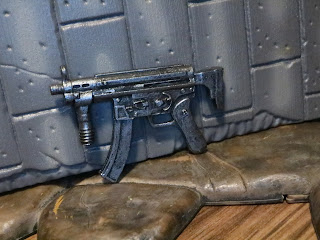 * The last set came with a basic MP5 and this one has an MP5 do, now outfitted with a stock on the back. This one is way more stylized than the previous gun, so maybe it's more intended for a Spawn figure. Spawn art just tends to have more stylized weapons, and this feels like a more stylized MP5 ripped from the pages of a classic Spawn comic. 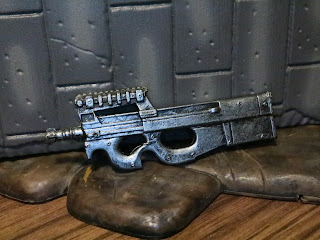 * The FN P90 is the second submachine gun in the set and another weapon that's pretty recognizable and highly versatile. It's not as stylized as some of the other rifles though it does get the black and silver "gunmetal" color scheme. It honestly seems to be a bit on the smaller side considering these are weapons intended for McFarlane's 1/10th scale figures, so maybe one of your Marvel Legends or G.I. Joe figures needs to borrow it. 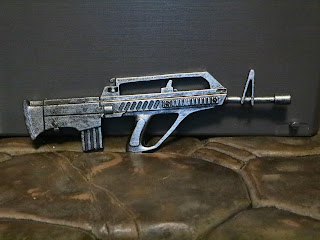 * This set has a nice assortment of rifles and we'll star with a look at his bullpup rifle that looks like a blend between a classic FAMAs and an F90. Again, I think this is one of those stylized weapons that's "close" but also somewhat fantastical. I think it makes a great action figure rifle for sure. 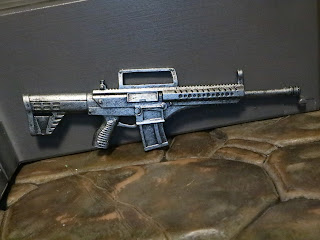 * Here's another generic assault rifle. Again, it's versatile, well sculpted, and just looks really cool, but it doesn't seem to be an exact replica of any real world firearm that I can tell (though if I'm wrong, let me know). I honestly like these comic book styled rifles, especially for Spawn figures and some of the DC figures. They just have a look and feel that you'd expect from comics, which tend to play loose and fast with the rules. 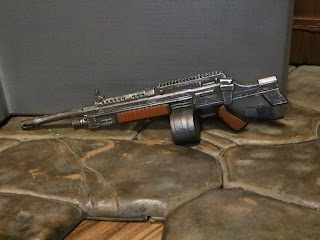 * Here's another weapon that looks like a real world rifle but that I can't identify. It does have a cool double drum magazine and some paint applications to show off the wooden handle and front grip. 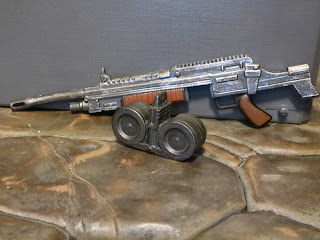 * It's also has a removable drum magazine! Just pop the drums out and pop them back in. Pretty neat trick. 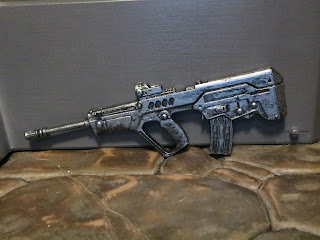 * Here's another bullpup styled rifle, this one resembling an IWI Tavor. It's quite sleek and has the solid detail that most weapons in this pack have. It's another good option for any of your modern McFarlane figures wanting a modern assault rifle. 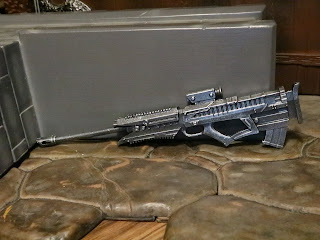 * Who needs a rifle? I can think of quite a few DC characters: Red Hood, Deadshot, Deathstroke, and various members of the Suicide Squad. Well, here's a good one. This one looks like it has a comic book inspired design, too, which is just perfect for your comic book inspired figures. 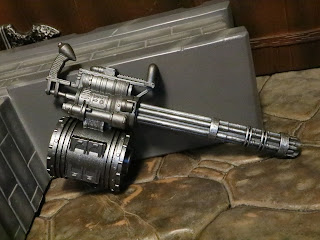 * This minigun is massive! Yeah, regular figures like Spawn can hold it, but it's another weapon that seems to be designed with Frankenstein in mind. This thing has a massive drum magazine on the bottom, too. Just huge! 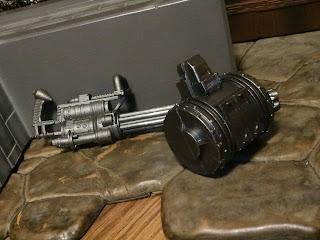 * The drum magazine comes in two pieces and is easily assembled. It's also removable, so you can use the minigun in different configurations if you want. It might be to heavy for some figures to tote around so dropping the drum would make it lighter. 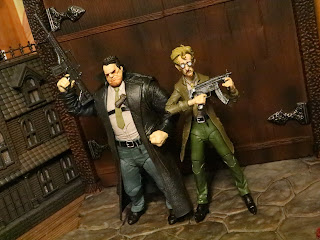 * Here are Sam and Twitch toting around some new weapons!

These weapons are definitely scaled for figures around 7 inches, so 1/10th scale, so they're perfect for McFarlane's own releases. They fee quite nice, not overly or bendy but not brittle, either. 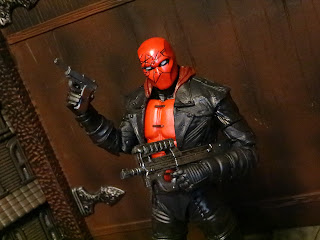 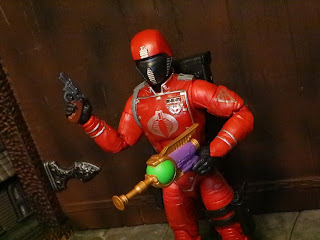 * Some of the weapons even do work with more traditional 6 inch figures like the G.I. Joe Classified Series. The revolvers look OK, as do some of the more sci-fi weapons. Maybe Dr. Mindbender whipped up this crazy weapon? 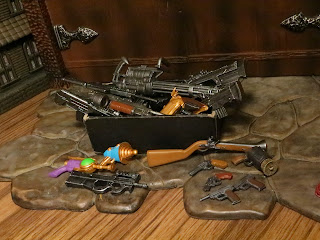 For $15 dollars, this is another Epic set of weapons for your 1/10th scaled figures. There's a nice variety here, fantastic quality, and even some really good paint applications this time around. McFarlane Toys is knocking it out of the park with these and it's really improving the lines they're putting out, particularly Spawn and DC Multiverse. You're paying less than a $1 a weapon which is incredible, especially for the fact that these are unique sculpts and painted, some rather lavishly. I'm down for a set or two of these per year.

I've also reviewed the Munitions Pack, which I guess is the first Accessory Pack.