Wrapping Up 2022: Sgt. Santa from The Naughty or Nice Collection by Fresh Monkey Fiction 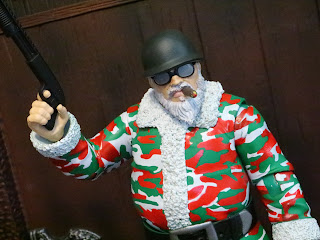 Get ready for joy old Saint Nicholas to deck the halls and jingle the bells of any enemies of the good ol' US of A. Whether they be threats foreign or domestic, Sgt. Santa is ready to light them up like the Fourth of July! There's something inherently funny about the concept of Santa Claus as a warrior, and popular culture has touched on that for years. In The Santa Clause, Tim Allen makes fun of a proposed toy commercial where Santa Claus is driving a tank. The Bill Murray Christmas classic Scrooged starts off with a trailer for a film The Night the Reindeer Died where Lee Majors joins forces with a rifle toting Santa Claus from terrorists. The John Boy & Billy Big Show had a radio skit in the early 2000s ago where Sean Connery payed Private Claus, a military operative who wanted some milk and cookies in his C Rations. This past Christmas season even had the film Violent Night, a fantastic film with David Harbour as a tough Santa Claus forced into a Die Hard-esque scenario. Now, Fresh Monkey Fiction delivers us the perfect figure to go toe-to-toe with Krampus: Sgt. Santa. He might not be lean, but he's mean enough to stuff your stocking with plenty of lead. Let's check out the Big Bad Toy Store exclusive Sgt. Santa after the break... 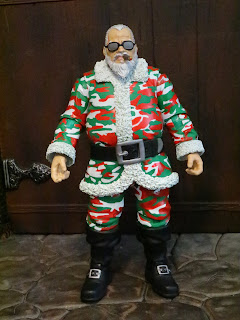 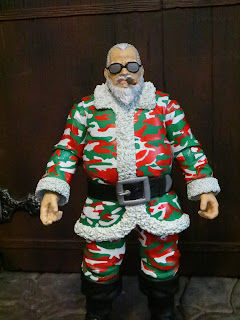 * As I mentioned in my review of Krampus, for so many lines these days reuse is the name of the game. Fresh Monkey Fiction has designed an excellent "Santa Claus" body and they've reused it a number of different ways, this time painting it up in red and green camo. Sgt. Santa uses the standard Santa body in this line, but that festive camouflage pattern really makes it stand out from everything else out there. This is a very nicely detailed figure who will absolutely stand out on your shelf or in your Christmas display. My figures arrived a few days before Christmas and my daughter and I had a blast setting thee up in different places around the house. 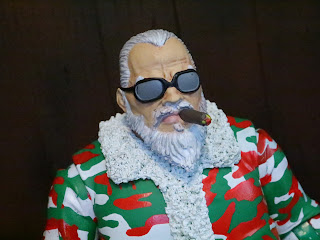 * This headsculpt is awesome. This isn't just Santa in camo; this is Sgt. Santa. He looks tough and weathered, with a really cool beard, some slick shades, and his hair slicked back. If Santa Claus showed up in The Expendables, this is what he would look like. He looks tough, grizzled, and ready to stick a lump of coal up Ebenezer Scrooge's coal chute if he dares ever step out of line again. 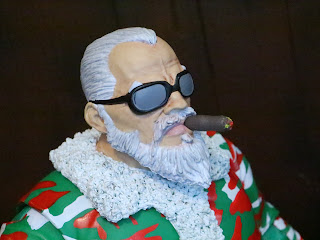 * He's also chomping on a stogie. Listen, I'm no fan of smoking in real life at all, but Sgt. Santa looks hella tough chomping on a Cuban while he's getting ready to launch a coordinated assault on the Grinch's compound. The sculpting and paintwork are just top notch here. 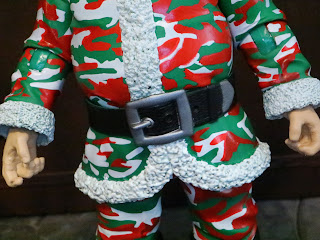 * The costume details are really fine, particularly the texture on Sgt. Santa's black leather belt, his shiny, silver buckle, and the intricately textured fur lining his suit. Anyone could have made a generic Santa Claus figure/ outfit, but Fresh Monkey Fiction put some real effort into making something that's a high quality piece and it looks great on every figure I've had in my hands yet. 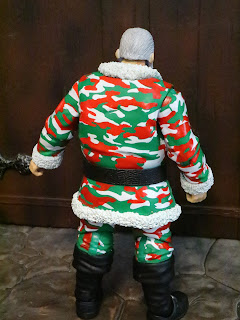 * Flip Santa around to check out his full camo pattern. I love the red, green, and white. It looks really cool and is so much more festive than just slapping him in regular camouflage. If Sgt. Santa were in charge, Oogie Boogie would have never even dared to send Lock, Shock, and Barrel into Christmas Town. Imagine This guy camouflaged next to a giant candy cane, just his eyes showing like in Rambo or Predator? Epic. 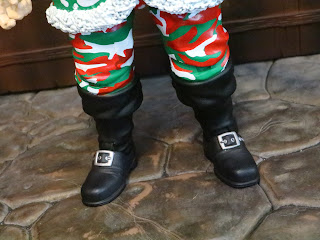 * Sgt. Santa might spend his day fighting the war on Christmas, but that doesn't mean he doesn't make sure his boots are taken care of. Because he does. 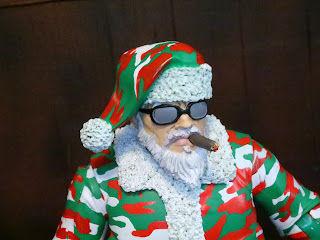 * Sgt. Santa comes with two pieces of headgear. First up is his official Santa cap, also decked out in camouflage. It fits like a charm and looks really cool 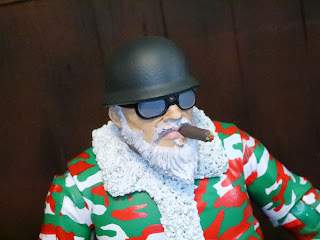 *  I actually prefer his classic military helmet, though. When the enemies bring their big guns, Santa needs every bit of gear he has to top them. 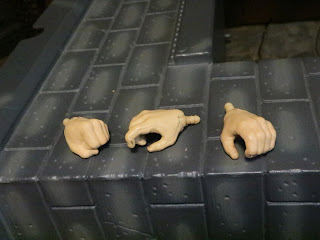 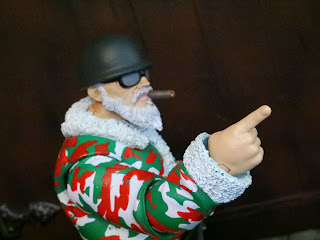 * The fourth is a bit more unique: A pretty serious looking pointing finger. Santa Claus wants you to join the Army! 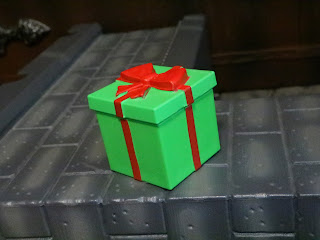 * While he might be going to war, that doesn't mean that Sgt. Santa doesn't have a gift for you. A standard gift box is included, this time in a green box with a red ribbon. 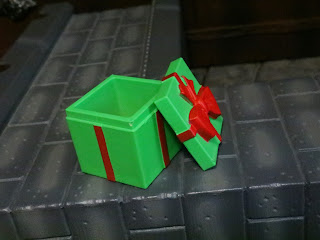 *  The lid is removable on the gift (it might take a bit of work, but it does pop off) and you can put something inside. There's nothing that comes with Sgt. Santa that will fit in here, so use your imagination. Maybe some spare magazines from another toyline. 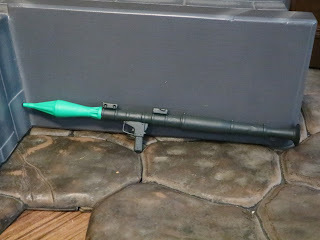 * Santa is packing some heat. First up is an RPG. The grenade is bright green (very festive!) and the sculpt is really clean and sharp. It's definitely an impressive looking weapon. 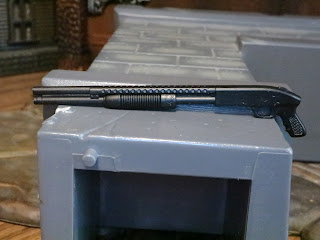 * When Sgt. Santa needs to get up close and deal with a whole mess of bad guys he can use his trusty shotgun. This is an excellent sculpt loaded with detail that some of your G.I. Joe figures might want to steal. I don't imagine Santa's going to give it up without some seasons beatings, especially if they're on the naughty list. 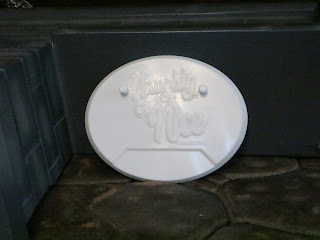 * Last up is a display stand. It's a very bright white (almost a snow white) and it has two pegs for keeping Sgt. Santa standing. He's a stout fellow with big boots, so he doesn't really need the stand, but it's here. The "Naughty or Nice" logo is also on the stand, which is pretty cool. 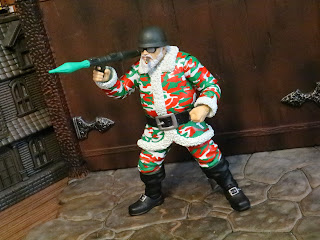 * Like the other Santas in this line who all share a body thus far, don't expect Sgt. Santa to be pulling off any ninja moves or Spider-Man stuff here. For being a portly fellow, though, the articulation is excellent. The joints all feel very sturdy and have a nice range of motion to them. Again, no Kung Fu fighting or anything, but he's expressive and fun to mess around with. This is a very solid, durable feeling figure with some real heft to him.

* That being said, it is disappointing that there there's no way to do a two handed weapon pose, especially with a figure designed for combat. I wonder if Fresh Monkey Fiction will ever rework some of the joints a bit for future Santa Claus figures who require more dexterity. A ninja Santa, perhaps? This is a great base body for most Santa Claus figures, but it just doesn't fully meet the needs of one wielding a shotgun or a rocket launcher. 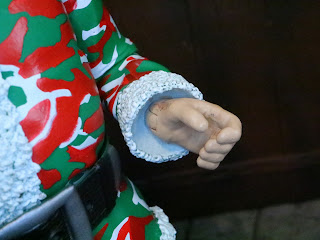 * The hands swap out on this Santa and while the pegs are sturdy, I did experience a bit of difficulty and some flaking paint. Make sure to heat the wrist socket well before pulling the hand peg out for the best results. 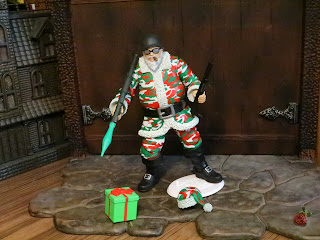 I really like Sgt. Santa. A lot. He has a fantastic headsculpt and just looks so cool and commanding on the shelves. He's an incredibly fun figure and just a really neat toy. My only real issue is that for a figure whose whole gimmick is that he's packing firearms and camo in preparation for a war, he's not really able to hold them in any fantastic combat poses. He can hold the rocket up just fine, but there's not really a great way to hold the shotgun except in a relaxed position. It's just one of those places where the use of the same base body for most variants becomes a weakness. Still, he's a lot of fun and I do love how he looks on display. He's a Great figure and a nice and unique addition to the line.


I've received a lot of toys from Santa Claus but the only other toy of Santa Claus I've reviewed is the Nightmare Before Christmas Metalfig Santa Claus from the 20 Pack Figure Collectors Set.

For more figures from The Naughty or Nice Collection check out the following:
Krampus
Posted by Barbecue17 at 1/17/2023