Wrapping Up 2022: Hordak from He-Man and the Masters of the Universe by Mattel 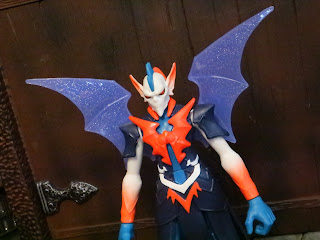 Near the end of last year I received the newest series of He-Man and the Masters of the Universe figures from Mattel's toyline based on the CG animated Netflix cartoon. While the toyline has been hit or miss, the show itself has been quite fun if you're up for a very different take on the Masters of the Universe mythos. The newest series of figures are labeled as "Savage Eternia" and, rather than the Power Attack feature that the earlier figures had, these figures now have slightly better articulation, most notably balljointed shoulders. Since I'm trying to wrap up my reviews of 2022 stuff, I opted to only check out Hordak from this newest series since he's a pretty unique depiction of the leader of the Evil Horde. Let's check him out after the break... 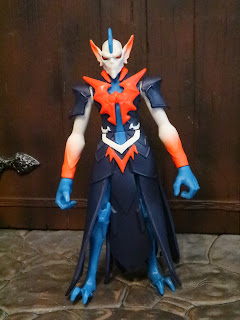 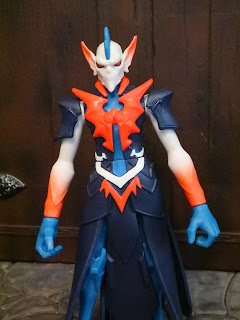 * Unlike the other Masters of the Universe lines out there like Origins and Masterverse, it's clear that the target demographic this line of action figures is kids. While I'd wager more adult collectors are buying these than kids are, it's still a kid focused line, so we're looking at simpler, stylized sculpts with vibrant colors. Hordak is definitely thinner here than he's usually portrayed, a bit more like the She-Ra and the Princesses of Power version. He looks very goth, and this design leans very heavily into some of the vampire-like aspects of Hordak's design and personality. It's still clearly Hordak, but maybe early 20s goth Hordak who's trying to discover himself while studying away at Horde University. 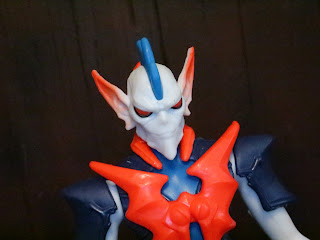 * I like the shape of the head. Again, it has all of the classic Hordak features like the pointy ears and blue crest, but they're elongated, much more like a Nosferatu styled vampire. I know the original Hordak head was based on a tribal mask, but there has always seemed to be a strong Dracula vibe to Hordak as well. In the show Hordak is voiced by the late Kevin Conroy. 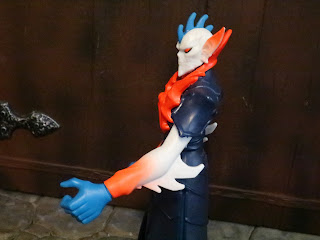 * It's definitely different than what is seen in the show but Hordak's arms do have some cool, spiked ridges on them that look like they could be kind of dangerous. Very Batman-like. 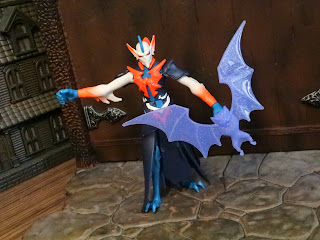 * Like the other figures in the line, Hordak is quite durable but only given very basic articulation. That's one of those areas where you can tell these are really geared towards the younger crowd. In this Savage Eternia series, Mattel has removed the Power Attack feature but given the figures balljointed shoulders. I'm actually OK with that, though kids may find the play value diminished. I like the extra movement though, so I'm happy. 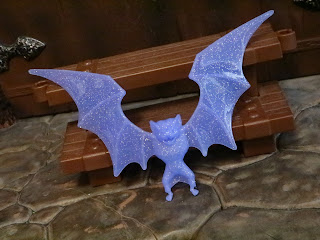 * The Savage Eternia figures in this series all come with a companion. Mer-Man has a squid creature, He-Man comes with Cadum, Cringer's nephew, and Hordak comes with Imp. yeah, the packaging specifically calls this Imp. It's more reminiscent of the bat companion/ shield from the vintage toy than the lovable Filmation character, but it is blue. And sparkly. 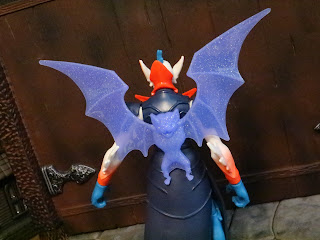 * Imp can fit on Hordak's back, giving Hordak wings when you look at him from the front. His wings on the show are far more impressive, but these aren't bad for a toy aimed at kids. 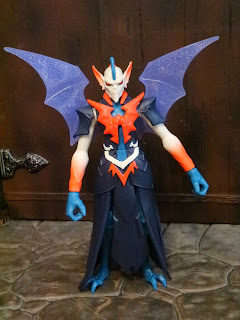 * Hordak is pretty impressive and frightening on the show. Here... not as much. He's still cool and all, but he definitely doesn't seem as large and menacing as he ought to be. I kind of wish Mattel had just made him a deluxe figure to really go all out and do some justice to his design. 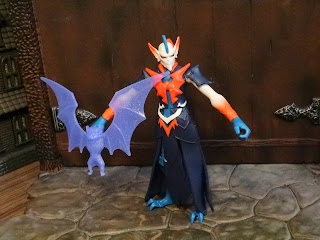 I like Hordak. He's certainly not an amazing figure or anything but he's fun and offers up an interesting take on the villain. A Good and a 1/2 for me. I really like the inclusion of Imp as well, especially how he allows Hordak to have wings when you snap him on Hordak's back. While this line is the least impressive of Mattel's current Masters of the Universe lines, I do enjoy the show and seeing the new takes on the characters translated into plastic. Mattel is definitely filling out the collection nicely and I'm curious to see how deep this line goes. It's already lasted longer than I expected it would.

I've reviewed so many figures of Hordak that he has his own review archive. Check out The Fright Zone for all of my Hordak reviews!

For more of Imp check out the Sonic exclusive Imp Straw Buddy.