Minifigure Review: Prince Adam from Masters of the Universe: Mega Construx by Mattel 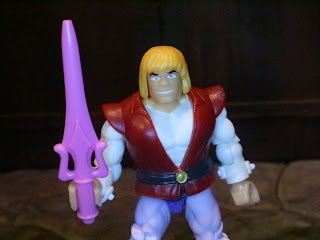 I can't believe it has almost been a month since I last reviewed one of these little guys! I have the rest of series one of the single carded Masters of the Universe: Mega Construx figures sitting here, so let's get cracking! Today I'm checking out Prince Adam who is absolutely one of my favorite characters. I don't care what you think; I love Prince Adam, Cringer, and Orko. They're fun, good-natured, colorful, and fabulous! While he's not technically a "new" character (unless you've never realized that Adam bears an uncanny resemblance to another muscular, blonde Eternia dude) he's a different enough figure in my book to not just be considered a variant. Let's check out Prince Adam after the break... 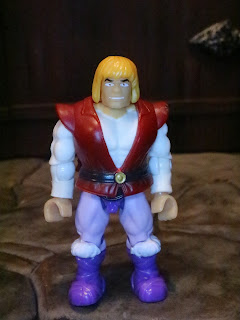 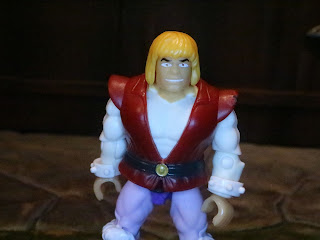 * Prince Adam uses the standard body in this line, although he's wearing lavender pants, purple boots, and a keen maroon vest. The vest is quite nicely sculpted and the colors do a great job of matching the vintage Prince Adam figure. All of the paintwork is really clean for such a small figure, too! 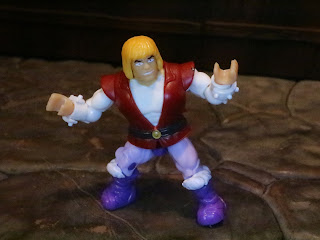 * If you haven't played with one of these yet, you need to. They are very, very impressive. The articulation is incredible! Seriously, these are some of the most well articulated toys you will find. They're durable, poseable, and really, really fun. Heck, you can even customize them easily, too. These are pure hand candy. You'll absolutely want to make him dance. No doubt about it. 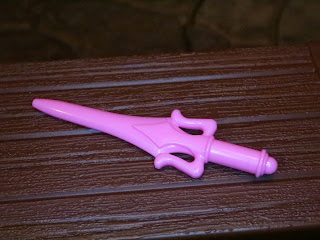 * Prince Adam comes with a pink copy of the Power Sword. The sculpt is perfect, though I think it might be a little too pink. The original one is more maroon colored if I remember correctly. This is a sturdy, sharp little weapon though. 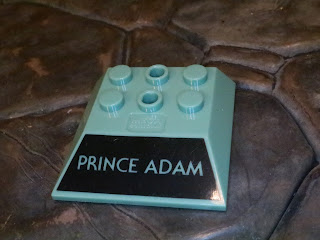 *   To help display these, each figure includes a stand. The stands are different than the ones included with the Mega Construx Heroes figures and are now just one solid piece rather than being made of three pieces. This one proudly identifies this as Prince Adam, and definitely not He-Man. Seriously, they don't even look alike or have that much in common. 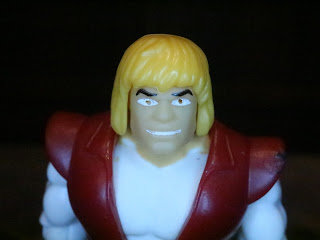 * These are definitely small figures and while I'm not inspecting perfection, I really don't think Adam's head looks as good as the previous He-Man heads. I think the painted facial features are just way too overdone here. 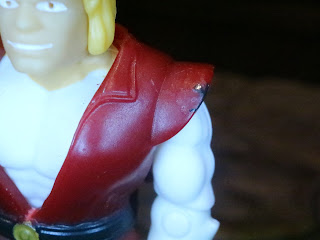 * My Prince Adam has a really weird black stain on the left sleeve of his vest. I tried scraping it off, thinking it might just be a bit of errant paint, but no dice. What the heck happened? I'm going to blame Orko. 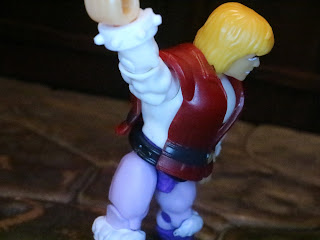 * From the front Adam looks great but take a look from the side and you'll see that his vest is really weirdly opened. What the heck? This seems like a really strange design choice, doesn't it? The large slit on the sides of the vest is quite an eyesore when you notice it. 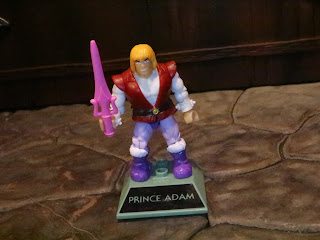 Prince Adam definitely has some flaws. I mean, he's not a bad figure or anything, but he's definitely weakest in this series. I'm kind of disappointed, too, as Prince Adam is one of my favorites. He's still a durable, well made toy, and he's lots of fun to pose and play with, but he has a few QC issues and the vest that hold him back. I really hope we get another Adam at some point with improvements, and maybe with Cringer and Orko as sidekicks. This guy is still a Good little toy, but he's not the shining star of the line by any means.

Prince Adam/ He-Man is one of my favorite characters and I've reviewed so many toys based on him that he has his own review archive. Check out Fabulous Secret Powers for all the He-Man reviews you could ever need!