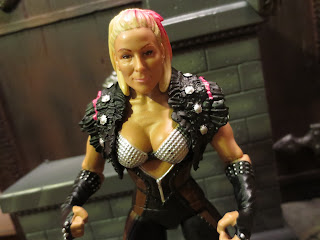 Today I'm looking at another figure from series 61 of Mattel's WWE basic line: Natalya! Natalya's been a major contender in the Women's Division of WWE over the past few months as she has pursued the Women's Championship and fought against the dirty tricks of Charlotte and her former manager, Ric Flair (she kicked him to the curb on a recent episode of RAW). This figure represents Natalya during her time as a manager for the tag team duo of Cesaro and Tyson Kidd, however, so the outfit it a little different. Ready for a closer look at this third generation superstar? Then join me after the break... 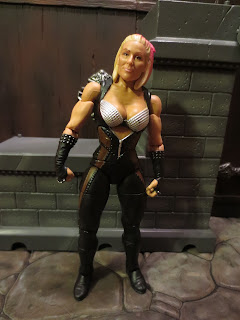 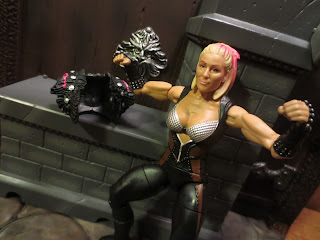 
* Basic figures don't typically come with accessories but Natalya comes with a vest or shrug of some sort that is removable. It stays securely and really does give the figure two semi-unique appearances. 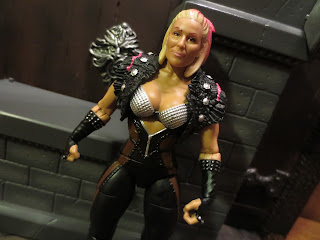 * As far as I can tell Natalya has a ton of new parts. So many of the female figures in this line use the same bodies over and over but Natalya is incredibly unique. There's quite a bit of cool detail on her including her cool studded gloves and see-through panels on the sides of the outfit. 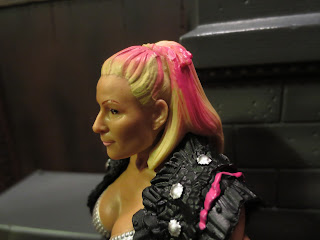 * Not only does Natalya's hair look pretty good but she has some pink highlights in it to give it a bit of flair. I can dig it. 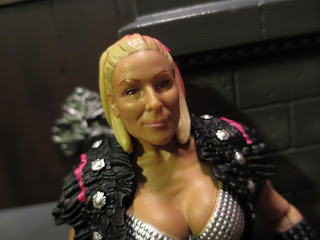 
* It's not that this face doesn't look like Natalya; it's just that this face looks like an older Natalya. Nattie is only 34 and something about this face makes her look a good 10 to 15 years older. 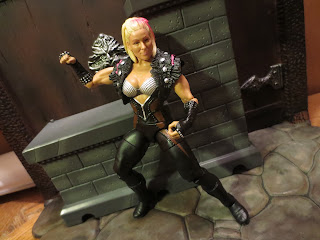 * One of the nice things about the basic figures of females and guys in suits is that they always feature the more advanced Elite style articulation. That's true here for Nattie but for some reason her articulation feels woefully limited in her legs. The range of motion is far below what we usually see in a WWE figure from Mattel which is incredibly disappointing. 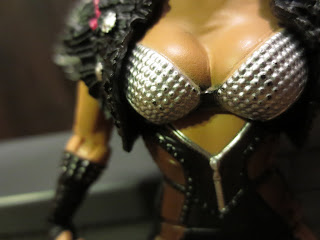 * Umm... there appear to be quite a few scrapes on Natalya's top. It looks like she's wearing some sort of metal (or perhaps sequined) bra but there are lots of scrapes on it. Strangely enough, when I look at this texture I'm reminded of the paint rub on an old Thundercats Grune the Detroyer figure I own. Weird, huh? 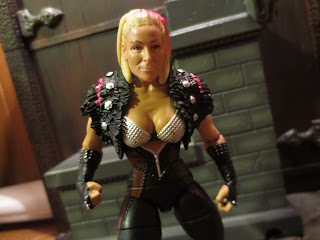 I really like Natalya but I have to say that this figure just doesn't do her justice. The likeness is off, the articulation is severely hindered, and the paint comes scratched right out of the package. Yikes! This is a pretty Eh and a 1/2 figure so unless you desperately need a Natalya figure, I think you probably should just wait and see what comes out down the line. It might be 6 months or so but we should see an updated figure of her with as much significance as she has in the WWE right now. I'm hoping that either Natalya or Becky Lynch takes the Championship from Charlotte at this point and thus gain an elevated status in the WWE. No Women's Division match has been announced for Money in the Bank 2016 yet, but it's only a matter of time.