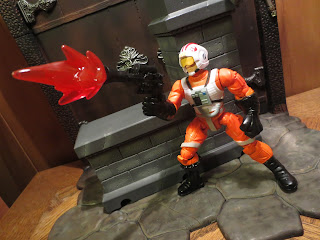 It's time for a special edition of "Barbecue17 reviews his kid's toys!" Tonight I'm reviewing an action figure that my little one picked up today while we were out on a grocery/toy run: Luke Skywalker in his X-Wing pilot's outfit from Hasbro's Star Wars: Hero Mashers line. I've been concerned for the health of this line (like so many of Hasbro Star Wars products of late) so it was good to see a few new figures in stores. While my attention has been on Micro Machines lately (in case you haven't noticed) my little one was pretty excited to find some new Mashers she had never seen before. They had a Shadow Trooper, Plo Koon, and this Luke Skywaler. She picked Luke tonight and we brought him home and played with him through snack time. She's in bed now so I grabbed Luke off of the table, snapped some pics, and decided I'd get you fine folks a review of something new that you can hunt down. Ready for a closer look at Luke Skywalker in his X-Wing gear? Then join me after the break... 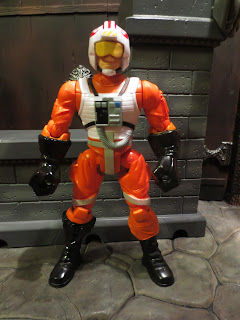 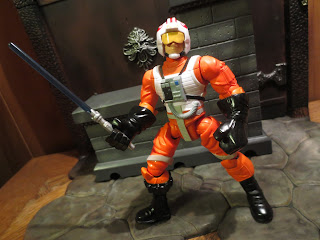 * I've reviewed a number of these figures and I'm always impressed by the durability. I've mentioned that while I like these, I really bought them because my 2 year old loves them. She loves Star Wars and these are some of her favorite toys to play with. Suffice it to say that these are great toys as the past ones have survived the play of a 2-year old thus far (with parental supervision, of course). 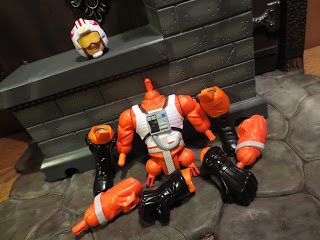 * In case you missed my extensive coverage of this line last Fall, these are called Hero Mashers because you can "mash" the figures together with other figures to create your own characters and variants. What's nice is that you can make cool variants such as putting a regular Luke Skywalker head on this body for an unhelmeted figure or create a pilot Admiral Ackbar. Some mash-ups work really well, others are extremely silly. I love coming home and seeing the odd combinations my little one and wife have made from time to time. 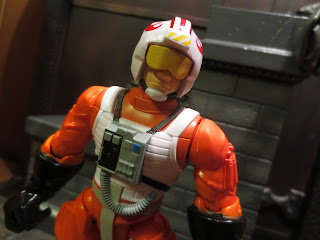 * The sculpt is pretty strong. While the likeness is pretty generic (it really could be a number of Rebel pilots under that helmet. Except Porkins. There's no way it could have been Porkins.) the effect of the goggles is cool as it's a separately attached piece. The chest panel, life vest, and various flares and cylinders on the sleeves and boots are nicely rendered, too. It's pretty impressive and blends well with the stylized look these figures have. 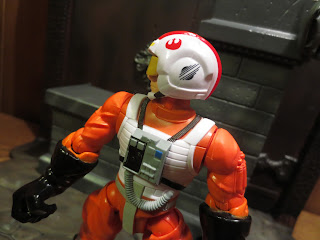 * The paint looks good, too. It's neat, colorful, and captures the classic feel of the Rebel pilots. The orange is dead-on and the gloves and boots are black and shiny. 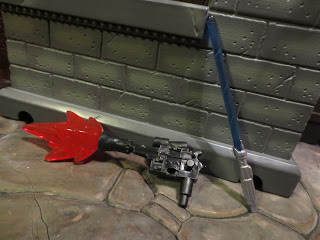 * Luke comes with two accessories: a Lightsaber and a blaster pistol. These are both of the accessories you would expect to find with this figure and they're both pretty cool. The right hand is open to hold either weapon while the tips of either weapon can plug into the peg hole in the left hand. The blaster has a mean blaster effect on the end but....wait...!!!! What is that?!!! 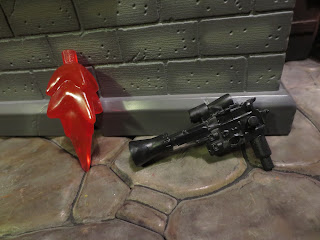 * The blast effect is removable? Wizard!!! Yippeee! Now this is podracing! Seriously, this is amazing. Hasbro has actually improved these figures! The blast effect detaches and it makes this figure immediately cooler because he's not always firing.  I asked for this change last year and it has finally happened! This is some stellar stuff right here. 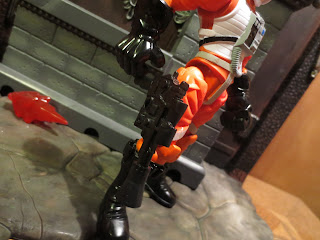 * There's also a peg hole on the side of the pistol! That's another thing I asked for last year! Do you think they read these reviews? Was I responsible? Because, seriously, who else has reviewed Star Wars Hero Mashers in such depth way as yours truly? Anyways, the side peg lets you nicely attach the blaster to either of Luke's hips which, let's be honest, is just the Geonosian's knees. 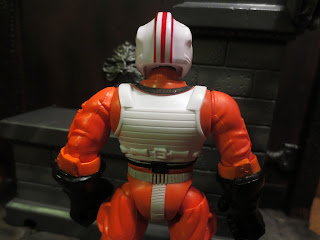 *My only negative is that these figures still don't have swivel/hinge shoulders. It's odd that you can't "mash" these figures at the shoulders not can Jedi figures really swing their lightsabers convincingly. Since Hasbro has made some improvements with this series, though, maybe we'll see more improvements made in the future. 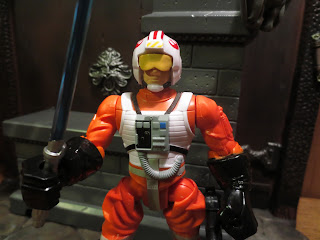 While my little one picked this guy out (my first choice would probably have been Plo Koon) I can't argue that she made a bad choice. This is a great figure that is not only as fun as the previous Hero Mashers but it actually surpasses them due to the removable blast and the peg on the side of the blaster. It's nice to see some improvements being put into this line as it gives me hope for the future. Hopefully we'll eventually get some characters from The Force Awakens (how is there no Kylo Ren?) and some female figures (how is there no Rey or Princess Leia?) released soon. I'm going to go ahead and give this figure an Great and a 1/2 because while it might not be everyone's cup of blue milk, it's a really well made cup of...blue milk with some well thought out improvements.

Now I just have to sneak him back in to my daughter's collection....