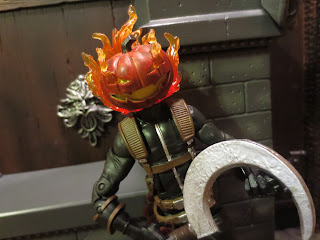 Sometimes you see a figure that's so cool you just have to pick it up even if you don't know who the character is. That's what happened with me and Jack O'Lantern. Released as part of the most recent series of Spider-Man Marvel Legends figures, Jack O'Lantern (called Marvel's Jack O'Lantern on the packaging) is released as one of those weird Hasbro Marvel Legends oddities where two separate figures are sold under one banner. Jack O'Lantern and Morbius are both labeled as Villains of the Night, although Hasbro has started including the characters names on the back of the package. Again, that's good because I had no idea who this guy was until I started writing the review. A trained assassin, Jack O'Lantern is the latest in a string of villains using the guise although he claims he's killed everyone else who has ever worn the costume. He's a slender, spooky bad guy and just a cool looking toy. Since I wasn't planning on building this series' build-a-figure of the Absorbing Man, I bought this guy loose without the BAF part on E-bay at about half of the price of retail price. That's a deal, eh? Join me after the break for more spooky villainy! 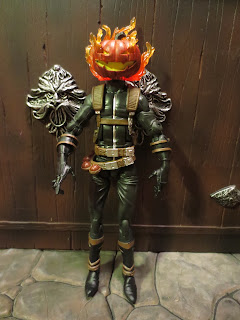 Accessories: Jet-powered broomstick, pumpkin bomb, a sickle, and the left leg of the Absorbing Man build-a-figure. 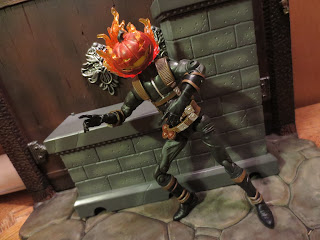 * Hasbro has been continually improving the articulation on their Marvel Legends figures and while I have a couple of problems with Jack O'Lantern, overall I'm quite pleased. Not only does he have double jointed knees and elbows but his torso and shoulders have ratchets in them to help keep them in whatever pose you want, which is pretty nice considering he's a sinewy little guy with some fairly large weapons. 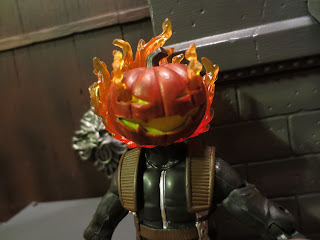 * I love this headsculpt! It is insanely spooky and has some great translucent flame effects all coming from behind it and out from the eyes. This is one of those figures that should be appealing to you even if you don't know who the character is (and again, I didn't). The pumpkin head even has a great dark wash to give it a much more intense look. I love it! Plus, with a little tug, you can remove it and use it as a normal Jack O'Lantern that's out of control! 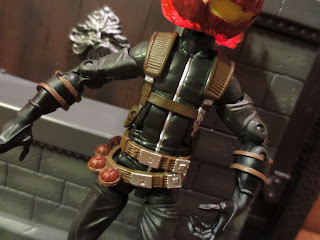 * Jack O'Lantern uses a body that to the best of my knowledge has only been used once before in SDCC Thunderbolts set (Ghost) so for most collectors, this is going to be a new, unique body. I love the slender, sinewy build for this guy as it perfectly matches the creepy vibe he's got going on. He's wearing some web gear and a belt that's holding four unignited pumpkin bombs. 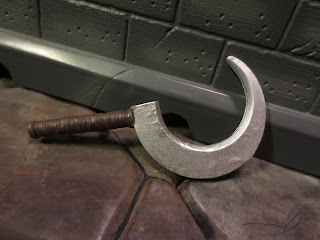 * I'm digging Jack O'Lantern's sickle! It's really menacing looking and has a fairly complex paint job. There's a handle on the other side which lets it slip over Jack's gnarly hands so he can hold it securely. 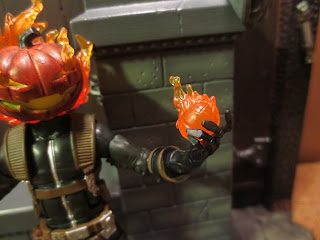 * What is it with Spider-Man villains and pumpkin bombs? They've been utilized by multiple incarnations of the Green Goblin, Hobgoblin, Demogoblin, and Vulture during his emo-Nightmare Before Christmas inspired phase. Jack O'Lantern comes with one and it fits nicely in either his left or right hand. It's molded in a cool translucent orange plastic and has a little face sculpted on the sides. I'm really digging it. 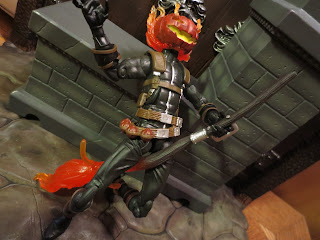 * Part of Jack O'Lantern's gimmick is that he can fly around on a jet-powered broom stick, kind of like Harry Potter. Again, what is with Spider-Man villains all having devices capable of flight? I guess it helps them to be able to have aerial battles with Spider-Man, playing to his strengths. The broom looks really cool and features a handle on the broom so that Jack can get a nice, secure grip on it. 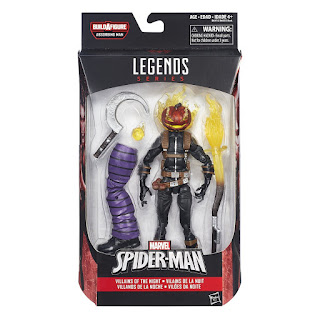 * Again, I bought this figure without the build-a-figure piece to save some money since I wasn't planning on building it anyways, but I gotta give props for Hasbro in continuing to offer some stellar build-a-figures in this line. If you want to see a great review of Absorbing Man, check out Jon's review over at Preternia! Of course if you buy this at retail, you'll get a BAF piece! 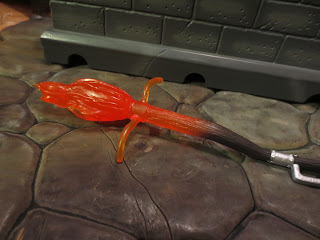 * I love the broom accessory but I really wish the brown paint for the wood extended down further. As it stands, it makes the wood look like it's orange and over-heated, which makes little sense unless the broom is legitimately on fire. The two pegs at the bottom seem like they should have been painted too so that Jack O'Lantern has a place to rest his feet. 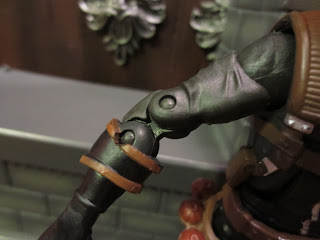 * Since he has a smaller frame, it's a bit of an issue that Jack O'Lantern has double hinged elbows and knees since it makes the limbs feel a bit less stable. The connectors are made from a slightly too rubbery material which I'm just not a fan of. I know it's a balancing act between being too rubbery and too hard and brittle, but this time it feels like Hasbro went towards too rubbery. 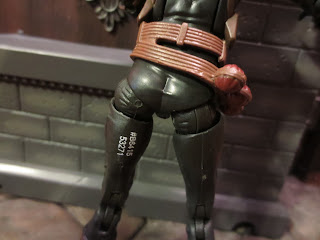 * Unfortunately, Jack O' Lantern has those classic Marvel Legends styled hips and you know what? I hate these things! They're so clunky and odd looking! They really are just frustrating! I much prefer these newer styled hips. They might have less range of motion but they seem so much more functional! 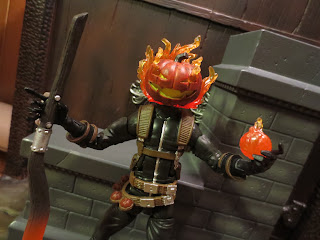 While I do have a few qualms with the articulation, I have to say that this figure just kills it. It looks amazing, has a perfect headsculpt, and killer accessories. I love these odd unusual characters and, as you're well aware, I tend to gravitate to figures that look like me (seriously, just look at the edges of the page). Jack O'Lantern is fun whether or not you know who he is and he's a great addition to a horror collection. You'll be seeing a lot of this guy on the site come Halloween I'm sure! He's a Great and a 1/2 entry in Hasbro excellent work on Marvel Legends!


I haven't reviewed any other figures of Marvel's Jack O'Lantern before (this may be the first one ever released) but I have reviewed a few other various Marvel Legends figures, including: