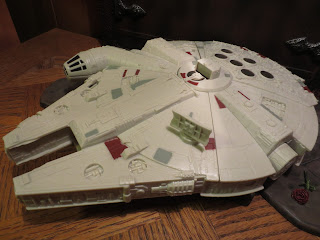 I hope y'all are Micro Machines fans because, due to some awesome clearance sales, I just recently picked up a fairly large number of Hasbro's Micro Machines that were released last year on Force Friday. So far I've looked at two of the plasyets and I've gone from being somewhat underwhelmed to overtly hostile. Today I'm looking at the Millennium Falcon playset which transforms into a somewhat generic Jakku scene. Seriously, other than a few parts that resemble the Millennium Falcon's interior, there isn't much here that can be matched up with the film. As someone who hung on to all of my Star Wars Micro Machines from my childhood and has continued to collect these into adulthood, I'm pretty well versed with most of what this series has had to offer. I'm trying to both judge these on their own merits and as successors of the Micro Machines brand. So, how does the Millennium Falcon stack up? Join me after the break and find out... 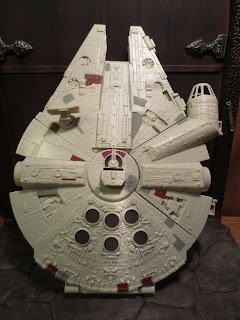 Non-Scalper Price: Originally around $30 but you should see it now for around $16 dollars. 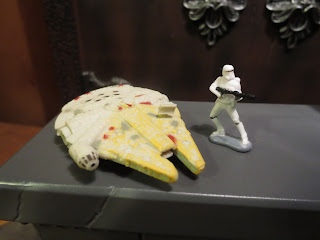 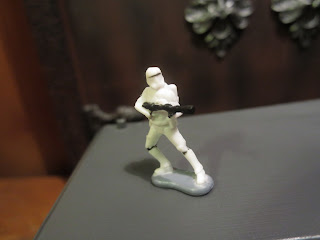 * The First Order Flametrooper is a decent little microfigure that stands well, has a few well placed paint apps, and is in an action pose. Like most of the other Hasbro microfigures, the Flametrooper doesn't stack up with the best of what Galoob produced back in the late 90's and during the Episode 1 era, but he's better than their earliest efforts. Mostly. 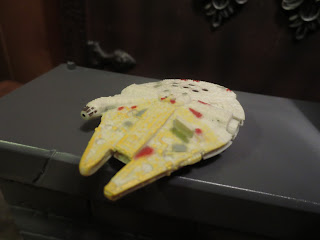 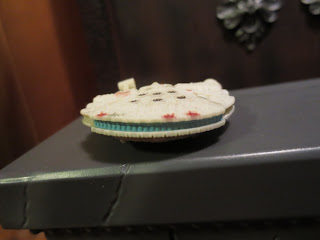 * The engines of the Falcon get a bright blue paint app that I just love to see! What I'm not so fond of is the weird bent look to the Falcon. It looks kind of warped, perhaps due to Hasbro using a softer plastic on these. Warped Micro Machines isn't a new thing but this ship isn't even blister packed. What's the excuse here? 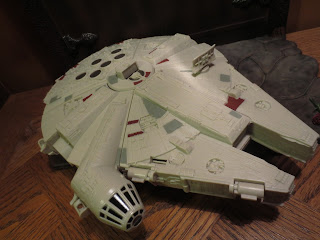 * Here's the playset all folded up in ship mode. What's kind of neat is that this actually looks like a Millennium Falcon that's fairly in scale with the micro figures (the Galoob playset always felt a bit too large). It looks pretty decent and has a few scattered paint apps over the surface. Nothing spectacular but acceptable work for this kind of toy I suppose. 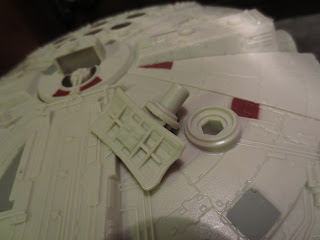 * I loved the little elements of The Force Awakens that showcase little changes for nostalgic elements. I'm talking about C-3PO's red arm, the evolution of Stormtrooper armor, the upgraded X-wings, and of course the Millennium Falcon's rectangular radar dish. Unfortunately, the radar dish here barely stays on. It's far too lose in the hole it sits in and tends to fall out when you transform the ship into a playset. 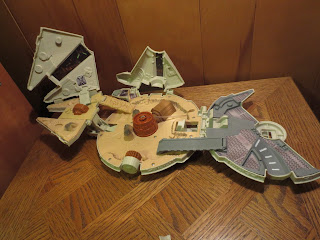 * When you pop this sucker open, I think you'll at least be impressed by how much space is here. This is a fairly large set with a lot of space. If you collected Micro Machines back in the day, you'll certainly be reminded of the Double Takes Death Star playset that transformed into a Tatooine playset. The transformation works really well and is fairly easy to open and close. 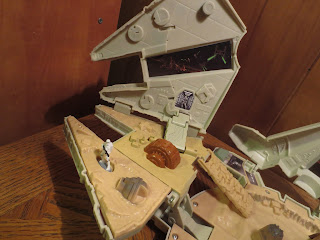 * I'm going to go ahead and say it right now, as it has been the thing that has pissed me off about every one of these sets: One figure??!?! One tiny micro figure in a massive playset like this? Hasbro, what the heck is wrong with you? What is some kid supposed to do with this set if they don't own any other Micro Machines? The purpose of these sets is that they're kind of an adventure in a box. One figure is so, so insanely cheap and just reeks of laziness. 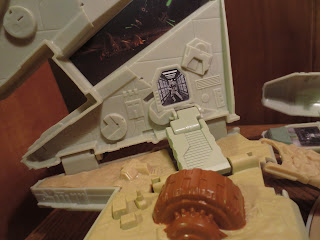 * Another think that leaves me scratching my head here: What exactly is this set showing off? It just feels like a generic Jakku scene mixed with parts of the Millennium Falcon. The sticker of the Stormtrooper in the corridor: Is that supposed to be the opening ramp of a landing craft? The detail is nice in places but it feels like Hasbro designed this to be as non-scene specific as possible, something that really feels like a weakness. 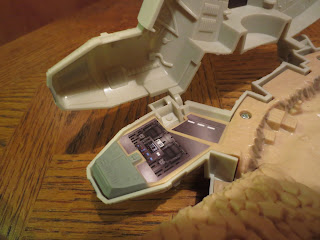 * Here's the Millennium Falcon's cockpit. While there's a sculpted console the sears are just a sticker. Considering neither Han Solo, Finn, Chewbacca, or most significantly Rey (who flies the ship off of Jakku) come with this set, what's the point here? And a sticker rather than a sculpted seat? C'mon Hasbro! 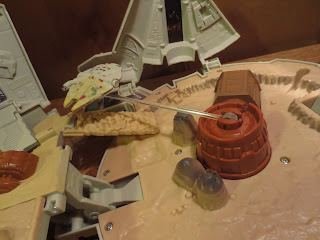 * Like every set in this series, the only play feature you get is a flying vehicle. This set features a flight rod that can spin a ship around the center of the playset when you push a button. It actually works pretty well and does kind of mimic the Falcon's escape from Jakku as seen in the film. 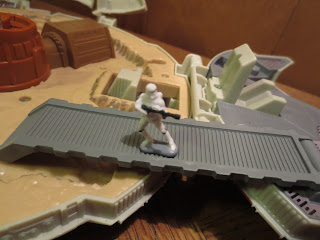 * There is a ramp that folds out and connects the Millennium Falcon section of the playset with the main playset. Maybe this set is supposed to be the junkyard on Jakku where the Millennium Falcon was lying in wait. Of course, why include a Flametrooper with this set? Those guy's weren't in that scene at all and it's not like you can just say "What a cool extra!" This is the only figure included, so you better enjoy the adventures of Flamey McFlamerson. 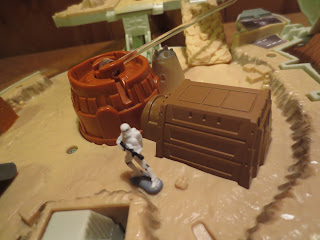 * There is a lot of space and a lot of cool junk setting around in this set, something which is kind of fun for waging your own battles. Although it's not like Hasbro is selling sets of First Order troops for kids and collectors to add to their existing sets. In fact, is there even a basic First Order Stormtrooper in this line? I haven't seen one yet. That's not really this set's fault, though. It's more of a problem with this entire line. 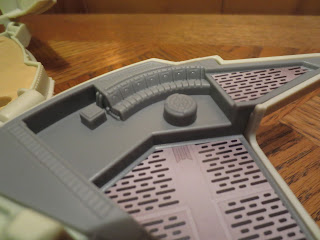 * At least Hasbro included one recognizable element: The Dejarik (holochess) table from the Millennium Falcon. There's no paint here but the sculpt is recognizable. 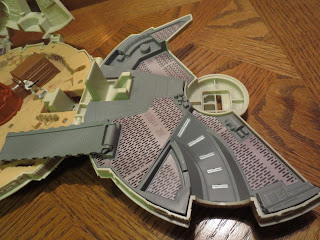 * That's about the only play feature on the Falcon side, though. There's some grating, but you can't open it up to hide any figures inside. You know, something basically every Millennium Falcon has been able to do since 1978. By the way, I feel like a really old, crotchety man right now. Just saying. 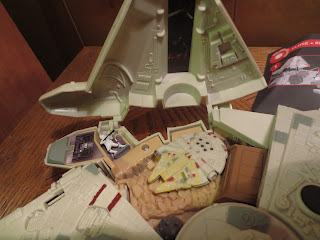 * The instructions do show you how to store the figure and vehicle they give you which is a welcome feature. Of course, storing one Micro Machine micro figure in a playset this size really isn't much of a feat but it's nice that this is pointed out in the instructions just the same. 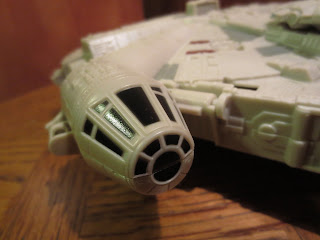 There definitely area a few things I like about this set but, as I've examined and played with this thing for about a week, it really is very dull and lifeless. It's generic feeling, has only one actual play feature (the spinning ship), and comes with only one figure. I feel like whoever designed these and manages the line loved the concept of Micro Machines but missed the point in what made those classic Galoob toys special. Each set used to tell a story of some kind or reproduce a conflict; this one is some empty space with a single bad guy army builder. What's a kid or collector displaying just set set to do here? It feels like little effort was expended on this, leaving me with a very Eh 1/2 feeling. There's one more playset I'll be reviewing in the next few days, so we'll see if it fares any better. This one is a disappointment, though.