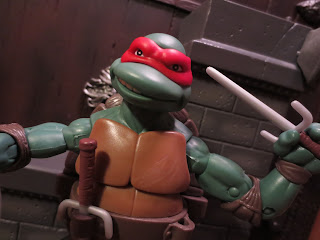 The Teenage Mutant Ninja Turtles are definitely one of those teams that I can never buy just one of. Despite the fact that Raphael is my favorite, I just cannot ever buy just one turtle from a series. You collect them all or get out of Dodge when it comes to the TMNT my friends. Today I'm looking at the fourth and final figure in Playmates Toys' Wal-Mart exclusive The Secret of the Ooze figures. Overall, I'm highly impressed with this line. It's certainly not the most realistic looking or most detailed toyline but the amount of extras Playmates has included here is just incredible. These really feel like a dream toyline of sorts. I apologize that all four of these reviews have had so much reuse in them but, let's be honest, overall these figures are really quite similar. That doesn't make them any less fun, though, so check out this cool (but rude) review of Raph after the break... 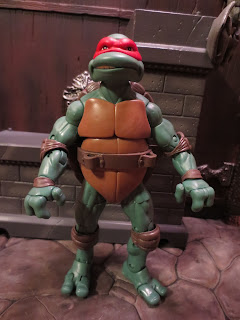 Accessories: 2 sai, 4 interchangeable heads, 4 shuriken, a pizza, and a shield. 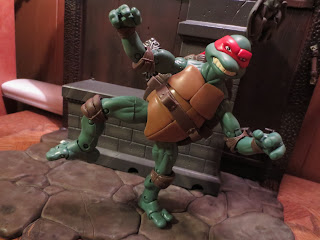 * The tricky thing with the articulation on any TMNT figure is that the turtles themselves have torsos that are oversized and not necessarily designed for mobility. Mix that in with their crazy ninja antics and you have an interesting juxtaposition of two different design philosophies competing. Playmates has done an awesome job here with plentiful, useful articulation. These guys rival any figure as mass market and possibly surpass them.Wicked! 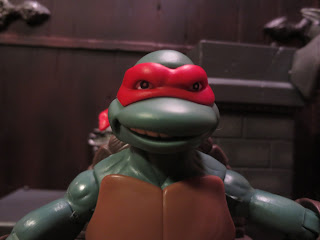 * I love the headsculpts on these and Raph is without a doubt my favorite of all. While these aren't insanely "movie specific" they definitely have a film feel to them, particularly with the expressions chosen. I really like the use of a separate piece of plastic for the bandanna over the eyes as it gives the figure a bit more of a layered feel, as does the belt. It's also a separate piece that, while not removable, helps the figure to seem just a but more intricate. 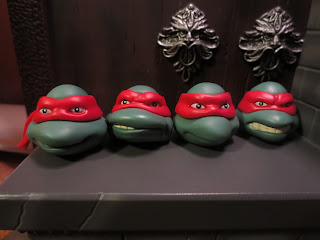 * Here's something I find amazing: Raphael comes with four interchangeable headsculpts. Four! That's crazy! I'm not sure I own any other figures that came packaged with four different headsculpts. They're all unique, too (not shared with his brothers). I know there isn't a ton of paint work here but they do give you a wide range of expressions and bandanna positions. Yes, some of the bandannas are hanging straight down while others are sculpted in a flowing position. They're super easy to swap, too! 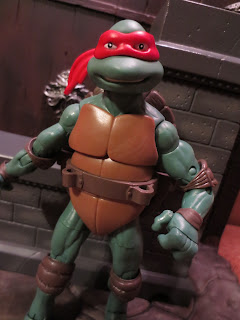 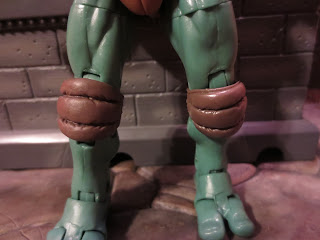 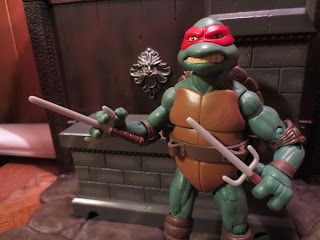 * Raph comes with his signature weapon: A pair of sai! They're wicked looking little things and I love that he can wield them a few different ways. While most of the sai is simply molded in a grayish plastic, the tsuka and tsukagashira have been given a brown paint application to liven things up a bit. 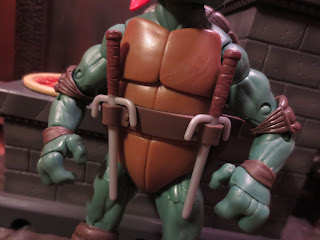 * As you would also expect, you can store Raph's sai in the loops on his belt. They stay in there nice and tight and look great. 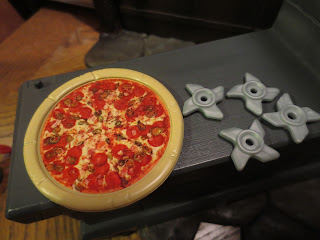 * Raph comes with a few extra accessories, the best of which are a pizza and four shuriken. Raph's shuriken are different from Leonardo's and they in fact look a bit more wicked. The pizza is a very simple sculpt with a sticker on the top to represent the toppings (I see pepperoni, onions, and jalapenos). 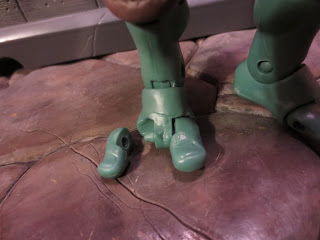 * The toe isn't broken but it does tend to pop off. I haven't had this problem with any other figure in this line, so perhaps it's just a fluke, but my Raph does have a loose toe. It's annoying and not at all movie accurate. 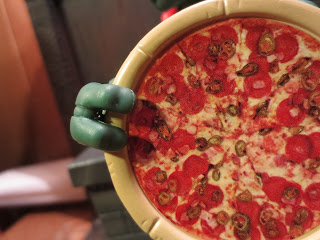 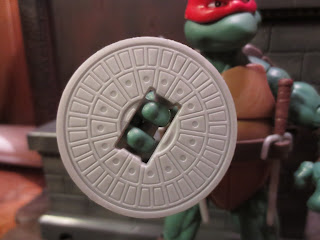 * I don't dislike this shield but I do find it odd that Playmates went with a hole in the front. Doesn't the hole in the front of a shield kind of negate it's purpose? This could have turned out much, much cooler. 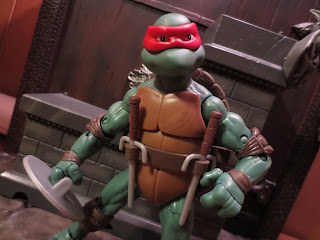 Here's the thing: These may not be perfect figures but my gosh is Playmates giving you a lot for your money. Compare the number of accessories they give you (four portraits and 8 accessories, some with paint applications) and the amount of articulation here with anything else on the shelf at your local store. There's no doubt you're getting an insane deal! On the next episode of the Collection Agency Brad and I will be discussing the current trend of high end 1/12th scale lines such as S.H. Figuarts, Mafex, Figma, and others. Take a look at those lines and the typical mass market collector lines like Star Wars Black, Marvel Legends, and DC Comics Multiverse: Which of those groupings does this line more resemble? I'm really leaning towards the higher end lines simply in terms of what's offered. Playmates has given collectors and TMNT fans a pretty great gift with these and me and my little one are having a blast (she loves the TMNT)! Raph gets a Great and a 1/2 rating from me as he's quite possibly one of the best action figure values you'll find this year despite a few flaws!

I have reviewed a few other Raphel figures from the Nickelodeon inspired line such as Battle Shell Raphael, Ooze Tossin' Raph, the D&D inspired Raph the Barbarian, and Stealth Tech Raphae. From the 2014 film I also reviewed Raph in Disguise.