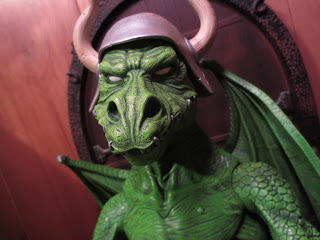 Today I'm looking at one of the largest Masters of the Universe figures in existence: Granamyr, the Great Dragon Lord of Darksmoke. This giant green dragon is the third Masters of the Universe Classics 2016 Power-Con exclusive figure from Mattel and he's a pretty impressive addition to the collection. This version of Granamyr is a simple repaint of the original 2012 red Granamyr figure in the green color scheme from the character's appearance in the minicomic Dragon's Gift. At SDCC 2011 Mattel held a fan-vote to decide on the color of Granamyr and since red won back then, we now get the green color scheme as the exclusive. Considering that Granamyr has really jumped up in price on the aftermarket having another go at the character was a pretty good idea in addition to offering a variant a number of fans really seemed to be eager to pick up. Ready for a closer look at the great green Granamyr? Then join me after the break... 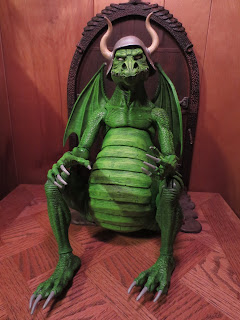 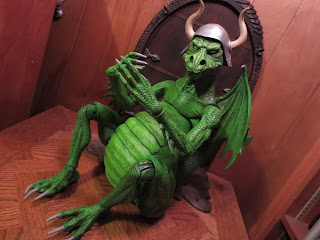 * Overall, I like Granamyr's articulation. If you're not accustomed to the character you might be shocked to know that he really doesn't sit or move like a normal dragon. He's an odd, pot-bellied figure that is intended to sit flat with his knees up. Considering that's meant to retain such a pose he does have some nice movement, particularly in his head, elbows, and wrists. 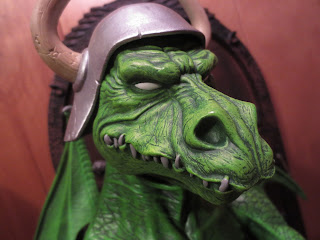 *Granamyr is amazing! Again, it's the same sculpt we saw on the original figure but it still looks incredible. There's just so much character in the face. The somewhat complex paintwork also really adds a lot to the appeal. Granamyr doesn't look flat and "toyish" at all; he's rather life-like. You know, for a fantasy toy of a dragon. 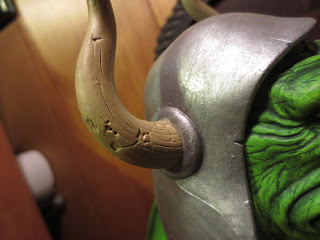 * Granamyr is rocking a very Sword and Sorcery inspired helmet. A very large Sword and Sorcery helmet to be precise. The helmet actually looks like a piece of metal thanks to some excellent drybrushing and subtle markings while the ancient weathered horns appear to be chipping a bit. This is a darn fine detail that definitely gives the figure a bit more personality. 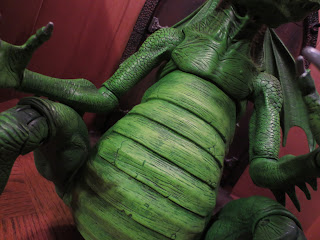 * The paintwork is really good on Granamyr. I own the red version but the green version as the one I wanted the most, so I'm rather pleased that he turned out so well. There really are so many subtle color variations on the body, particularly on the stomach. This is some of the best paintwork I've seen on a MOTUC figure. It's really detailed and adds a ton of life to the toy. 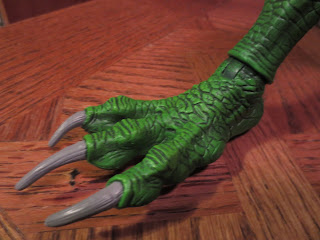 * I figures I should give you a close up look at ol' Granamyr's feet, too. I love how Mattel handled his claws and scaly feet. They did an excellent job here and the paintwork does the sculpt justice. The toes aren't actually shop but they certainly look as if they could be. 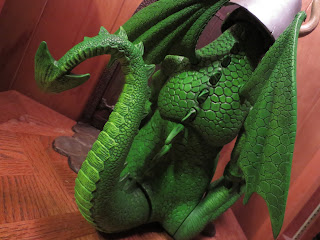 * Here's a look at the back so you can see Granamyr's epic tale, his cool spikes, rather small wings, and really great scales. The Four Horsemen really got the chance to flex their creature sculpting muscle here and it shows on ever inch. 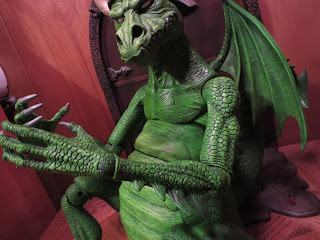 
* As I was checking this guy out I was definitely reminded that he lacks swivel/hinge shoulders. What a strange omission, particularly considering that so many of the other joints are ball joints or swivel/hinge joints. 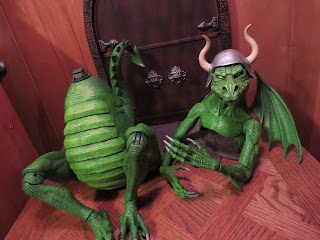 * Don't worry! Granamyr isn't broken. When you buy the figure he comes disassembled in a box and you simply snap the pieces together. Unfortunately, the mid-torso doesn't snap together very tightly. It seems like there's a problem with the mold as I've read of other collectors having the same problem. It's not a deal breaker as the figure will look fine and function well but it does tend to come off when you try to rotate the torso. 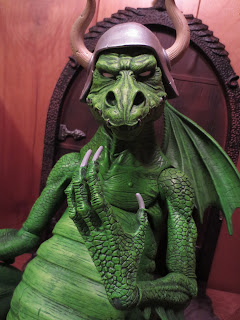 Granamyr turned out to be incredible! This was an awesome choice for a convention exclusive as green Granamyr is apparently the less popular variant (or so the SDCC 2011 poll would have you believe) and releasing him at Power-Con ensured that fans were able to pick him up. While there is the problem of the limited shoulder articulation (which the original figure had) and the molding issue with the mid-torso connector), there's nothing at all wrong with the sculpting and paintwork. That is flawless, my friends. Granamyr is truly one of those figures that packs a visual punch and whose size will prompt a "Wow!" factor in anyone who sees him. He's a dominating presence and should really give you something to build a display or collection of MOTUC figures around. I'm not sure where I'm going to be displaying him but, since he's a Great and a 1/2 figure, you know I'll find room somewhere.


I own the original red Granamyr but I guess I never reviewed him on here. I have reviewed the other two Power-Con 2016 exclusive figures, though: Beast Man (Blood Red Henchman) and Camo Khan.