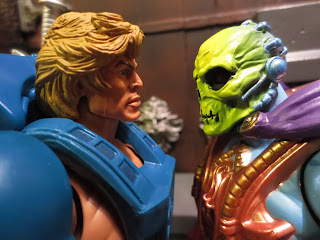 When I reviewed Dragstor I made a big deal because he was the last unique character we needed to complete the vintage Masters of the Universe line. Now, with this two-pack of Laser Power He-Man & Laser Light Skeletor, Mattel has successfully recreated every vintage MOTU figure in Masters of the Universe Classics. That's a pretty freaking huge deal! I mean, Hasbro hasn't even really recreated all of the vintage Star Wars figures in the modern format and they've released hundreds of figures over the years. Today as we celebrate this awesome accomplishment I'll be reviewing this set which is based on the last two figures released in the vintage line. These figures were originally only released in parts of Europe in 1988 but now they've been made available to collectors worldwide through the 2015 Club Eternia subscription. Ready for a closer look at He-Man and Skeletor in their final epic struggle? Then join me after the break... 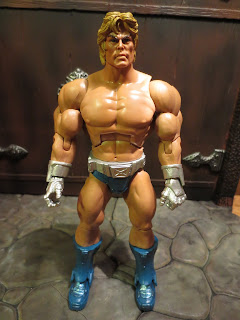 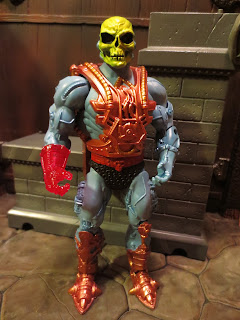 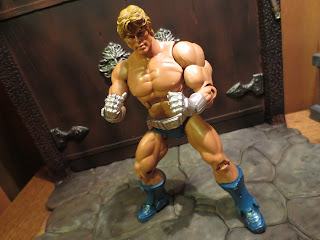 *While he has a ton of new parts, Laser Power He-Man has the same great articulation you've come to expect in MOTUC. In fact, he actually has swivel/hinge wrists on his left and right hands as well. That's something very few figures in this line have had. The articulation is tight and Laser Power He-Man is incredibly sturdy and durable. 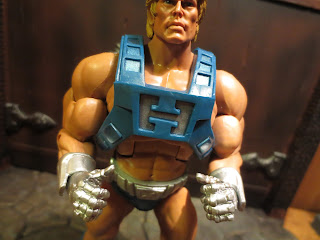 * The armor, gloves, and boots on this figure are really sweet. He-Man looks great here and, while he's still a half naked barbarian, he's sporting some more armored looking accessories. His boots are incredibly cool with a great metallic sheen while his armored metal gauntlets remind me of Ash's metal hand from Army of Darkness. I'm digging this look. 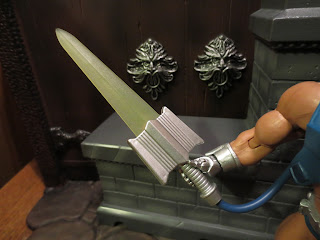 * I love this massive power sword. It's oversized, bulky, and odd looking but there's something incredibly cool about it. It really looks like it could cause some damage. I'm not sure that it really needed to be this big but I'm not going to complain. It definitely feels like something from a 1980's action figure. 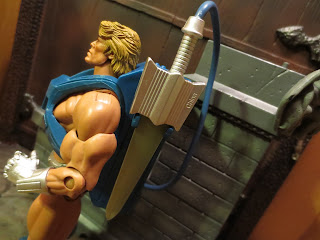 * There is actually a clip on the side of He-Man's massive backpack that lets you clip the sword to it for safe keeping. Is it impractical? Of course. Does it kind of remind me of how the Neutrino Wand clips onto the Ghostbusters' Proton Packs? Absolutely. That's an odd connection but it makes me love the piece even more. 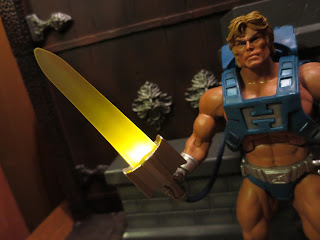 * All things considered, I really do like the light up feature on this sword. It looks kind of cool and my little one is nuts about it. Press the button once and the massive power sword begins to glow. Hold down the button on top of the backpack and the sword will flicker on and off. 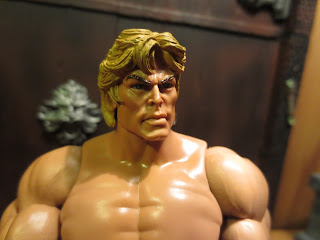 * This is tied with the Snake Armor 200x inspired head for my favorite He-Man headsculpt in the line. It's just incredible and blends together a stern, rugged expression with some fantastically awesome hair. I mean, this guy is magnificent. I'm really glad that Mattel changed their earlier stance on only including one style of He-Man head in the line because now there is a style that hopefully pleases everyone (and of course Filmation fans have that version coming out later this year, too!). 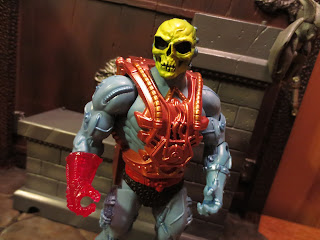 * Laser Light Skeletor really is a pretty wicked looking figure. I love the mixture of his green, skeletal and supernatural visage mixed with some sort of bio-organic technology. He's definitely one of the most interesting looking figures released this year and features a ton of detail. The fact that he has a unique torso definitely goes to show what Mattel could have done with so many characters if they weren't hellbent on using rubber overlays over the standard torso all the time. 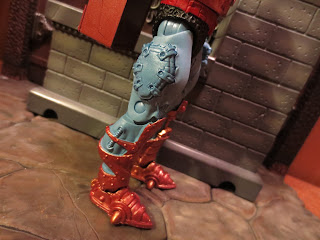 *Skeletor really has some fantastic detail all over his body. I love the techno-infused details that cover his arms and legs. His boots are really cool (another unusual, asymmetrical design in MOTUC) and metallic paint is not only used to give the boots a bronzed sheen but also to highlight some of the mechanical elements growing out of Skeletor's skin.  The paintwork and fine details really are pretty incredible on this figure as they present an interesting midway point between the basic Skeletor figures and the New Adventures depiction of the character. 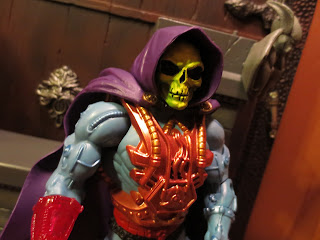 * I've seen a few folks complain about Skeletor's hood and cape but I have to admit that I really like them. The cape is removable, although it's tough to get off, but the hood easily comes on and off. It's a simple fitted piece that slips over Skeletor's head. Make sure to position it just right and it not only looks cool but really adds to the menacing look of this figure. 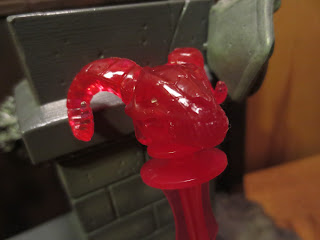 * Skeletor comes with a translucent red havoc staff which looks pretty cool.The handle is shaped differently from the standard release that has been included with a few different Skeletor figures over the years. It's not as cool as the original but the translucent red looks really wicked. It's actually a really interesting accessory and features a swivel joint at the top. 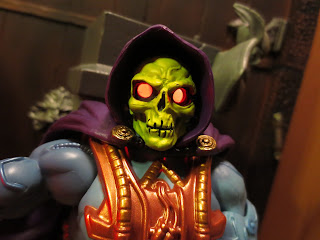 * The light up eyes on this figure are just too cool! When you push the button on Skeletor's massive backpack the eyes slowly and eerily light up. The headsculpt is really awesome and this guy just looks incredibly creepy. Push the button once and the eyes light up; hold it down and the eyes flicker. While we've lost some articulation and the removable head feature, the light up eyes are incredibly well executed. 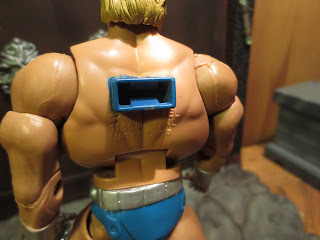 * Oddly enough, He-Man's massive Laser Power backpack doesn't plug into his harness: It plugs right into his bag. Bizarre, huh? Since Mattel made it so massive and heavy they put the port right into He-Man's back, thus requiring a new rear torso piece. I really like this He-Man body but the ugly plug back here definitely prevents reuse. 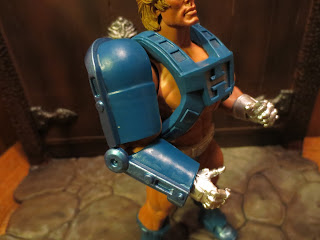 * I don't dislike the concept or look of He-Man having some armor on his right arm but I'm really curious as to why Mattel went with clip on hard plastic shells versus doing some cool fitted, flexible armor. You know, like Man-at-Arms had back in 2009. Sometimes it seems like Mattel revisits problems which they had already seemingly solved in the past. This armor just looks too bulky and cumbersome. 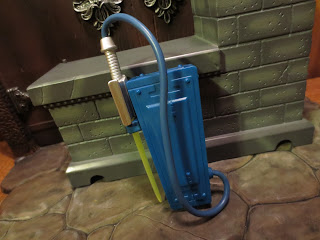 * Here's He-Man's backpack. I like it but my gosh is it enormous. It can very, very easily tip him over backwards. I like the design but I really wish that Mattel would have went with a smaller, sleeker design or implemented some cool features into the pack itself. If it opened up to store a laser pistol or something I could get behind the enormous size, but this giant contraption to hold some cell batteries? Pointless and unnecessary. 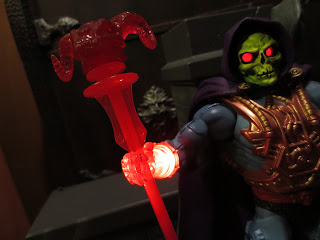 * While I love Skeletor's eyes, his glowing right hand is less impressive. Not only did its inclusion cause a number of joints in the right arm to be sacrificed but the light fails to emit a strong enough glow to cause the included translucent havoc staff to light up. Kind of disappointing, really. 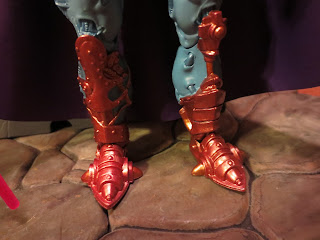 * One thing that's really weird about this figure is Skeletor's feet. They look really cool but they're just positioned so oddly that Skeletor has a real problem standing. Not only is his non-removable backpack kind of heavy, thus tipping him backwards, but his ankle joints are really stiff and have no lateral movement. You really have to utilize his cape or a stand to keep him standing. 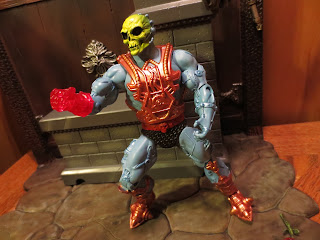 *Besides the ankle problems, I'm also disappointed that Mattel really sacrificed the articulation on Skeletor to implement the light-up feature. MOTUC has almost always eschewed integrated, mechanical action features that would unnecessarily bulk up the figure or reduce articulation. Since Mattel went with internal electronics here Skeletor has no mid-torso articulation, no ball jointed movement on his head, and limited movement in his right arm. 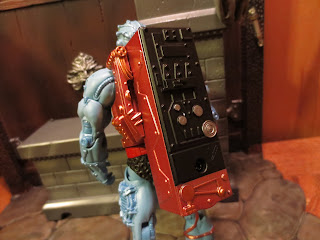 * Seriously, is there really any need for this large of a battery pack on this figure? I've owned figures from dollar stores with LED eyes that didn't need to have a battery pack this large. Heck, my work has given out LED keychains that were smaller than this whole darn backpack. There was no reason to replicate the oversized nature of the backpack here. 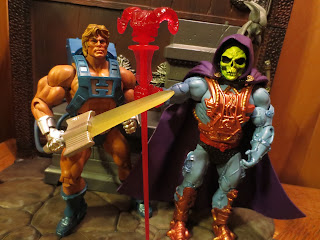 Over the next weeks as I start to release my top ten lists for 2015 I'll definitely be giving MOTUC some heavy attention. I really do have to say that it's easily my favorite action figure line of all time and having these two guys to finish the set is a huge victory. That being said, this pack is a mixed bag. The sculpts and lights themselves are pretty cool but the limited articulation on Skeletor and the ridiculously oversized backpacks hurt things quite a bit. Overall, I'm giving this set a Good and a 1/2. All of the vintage MOTU line recreated in a modern style. Wild, huh?

I've reviewed plenty of other MOTUC figures on the site, including: