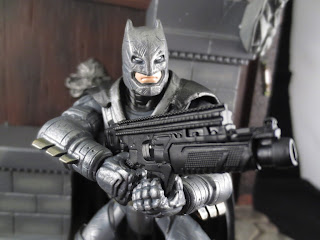 Now that I've finished my Christmas Haul for 2015 it's time to jump into reviewing the first new toy of 2016! On January 1st I went out on a shopping trip with my family and walked into a Toys 'R Us right as they had finished putting out the Batman v. Superman action figures. Based on the upcoming film Batman v. Superman: Dawn of Justice that apparently everyone on the planet already hates except for me (I'm seriously exited for it), this figure represents the amazing looking armored version of Batman that we've seen in the trailers. (I'm calling it now: I think Ben Affleck is going to absolutely knock the role of Bruce Wayne out of the park.) Armored Batman is part of a movie focused series of figures that are sold under Mattel's DC Comics Multiverse banner which covers a diverse array of characters from movies, films, comics, and videogames. Mattel has had the Multiverse line on shelves for about two years now but they've all been in the 1/18th scale. This is their first foray into the 6 inch scale since the end of the Batman Unlimited and DC Comics Signature Collection lines. I'm glad to see some quality 6 inch figures back on shelves and I knew that I needed this armored version of Batman. Ready for a closer look? Then join me after the break... 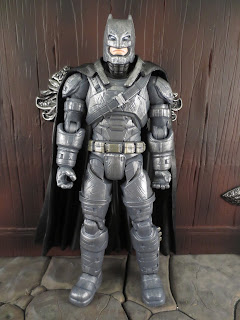 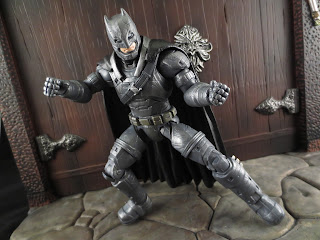 *The articulation on this figure is pretty excellent overall. He's basically built like a DCUC figure but with the addition of swivel/hinge elbows. The armored suit hides most of the joints well allowing for a incredible look in many poses. This guy feels really sturdy and is just pure hand candy when you start posing him. I have one complaint about the articulation, but I'll deal with that below. 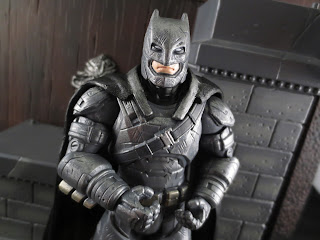 * I'm really liking the sculpt. At first I thought it was a bit soft but the more I look at it the more I appreciate some of the smaller details that cover it. It's definitely far better than most other retail focused movie tie-in toylines and I'd honestly say the body is comparable to all but the best work we see from DC Collectibles. 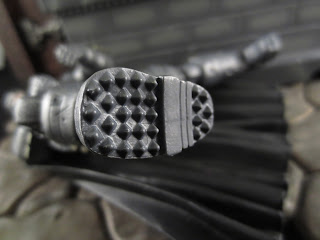 * Check out the bottom of his boots. Armored cleats, baby! This absolutely hearkens back to Bruce giving Clark a face full of his foot in The Dark Knight Returns and should hopefully please fans of that book (I know that I was quite thrilled to see this little detail). 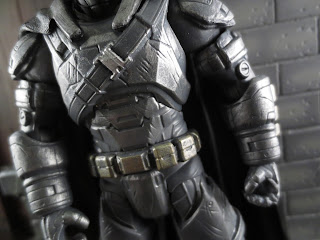 * The paint job on Batman's armored suit is far more impressive than I initially thought it was. I initially expected it to just be molded in gray plastic but, after getting it out of the package, I was impressed by the dry-brushed appearance of the armor. This looks really great and really brings to life all of the various dents and scrapes covering the suit. There's also a dirty bronze coating on the gauntlet spikes and the utility belt. Pretty nice work for one of Mattel's retail lines. And notice: No Bat-symbol on the chest! That's movie accurate and rather unusual for an action figure! 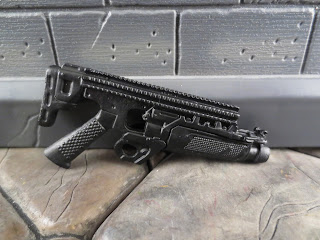 * Oh my gosh! Zack Snyder has ruined Batman cuz Batfleck is packing heat!
OK, I'm just being facetious. The author of that article is a friend of mine and, if you look in the comments, you can see I like to keep him on his toes. That being said, yeah, this is a Batman figure that comes with a gun. From the other toys nearby, though, it seems like Batman uses a gun with Kryptonite bullets in order to keep Superman in check. Seems reasonable. I love this accessory and Batman looks awesome holding it. It's a terrific sculpt with a nice amount of detail. 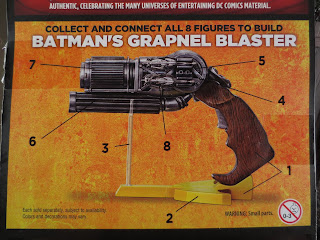 * The eight figures in the Batman v. Superman: Dawn of Justice subset each include a Collect & Connect piece to build not a figure but a prop replica. Buy 'em all and you can build a replica of Batman's grapnel blaster. This is honestly a pretty cool idea and it's definitely enticing me to buy more than I originally planned. So far the last four figures are secret (I'm guessing we'll get another Batman, Aquaman, Doomsday, and Lex Luthor) but right now, in addition to Armored Batman, you can also grab regular Batfleck, Superman, and a pretty nice Wonder Woman. 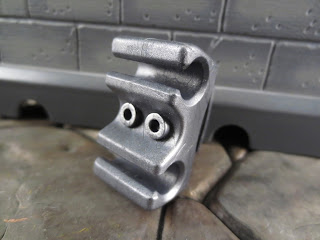 * And here's Collect & Connect piece #4! It's a holder that snaps onto the side of the grapnel gun to hold two extra grapnels. Nothing too exciting by itself but the paint work does have a nice drybrushed appearance. 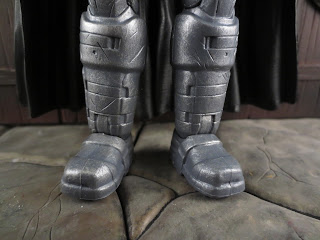 * I mentioned above that I had one complaint about the articulation: It's the lack of any kind of lateral motion on the ankles here. Batman really needs some lateral motion or ankle rockers to help give him better poses but, unfortunately, Mattel has left these out. 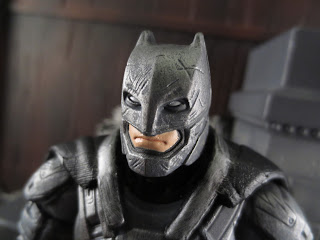 * The only part about the sculpt I'm not completely sold on is the head. Not the helmet but the head underneath the helmet. It's not atrocious or anything but it definitely doesn't convey the idea of a head in a heavy metal helmet as much as it should. Bruce's visible mouth just doesn't look quite right here for some reason. 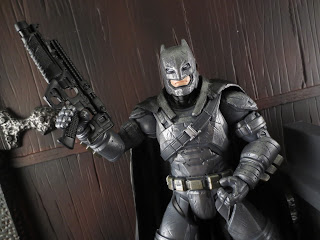 This is a figure that the more I play around with and pose, the more I like it. It's not perfect and it's certainly not up to the same quality as something like the DC Collectibles Thrasher Suit Batman, but I'm still pretty happy with it. Bruce looks great posed with his Kryptonite round firing rifle! I can't wait to see him in action on film. I'm also curious to see how this Collect & Connect grapnel gun turns out. As it stands, this is a Great figure and is well worth considering for Bat-fans wanting to snap up a more unique Batman costume for their collections.


While Mattel is now reentering the 6 inch scale with these new Multiverse figures, the line has been around since 2013 in the 1/18th scale. I've only reviewed a couple of figures from that line:

I have reviewed so many Batman figures that it's not even funny anymore. I've reviewed:

I've also reviewed plenty of other figures of Batman himself, including:

Young Justice: Invasion by Mattel
Batman
Posted by Barbecue17 at 1/11/2016