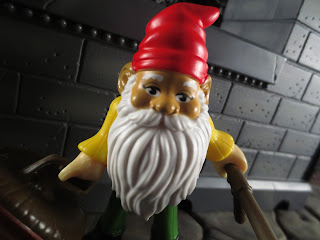 It's time for a review of the fifth of six Imaginext Collectible Figures in the newest series: The Gnome! Looking kind of like a warrior garden gnome or something, the Gnome brings another fantasy based character into the world of Imaginext. My little one was really excited when we found this series at Target about two weeks ago and, after a good deal of play time, I'm pretty sure this guy is her favorite figure from series 6. At first she called him Santa Claus (she's only around 2 and a 1/2), so I think that was a big plus in her book. Ready for a closer look at the Gnome? Then join me after the break... 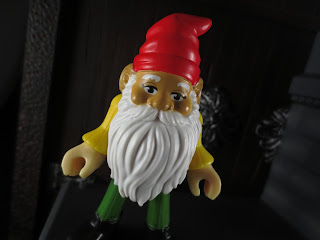 *The biggest reason my little one loves this guy is the gnome mask. It's a very archetypal friendly fantasy gnome, kind of like David the Gnome, and it fits right over the figure's body. The sculpt is really nice with lots of detail in the beard. You can's see it here but there is a little Imaginext "i" on the back of the gnome's hat. 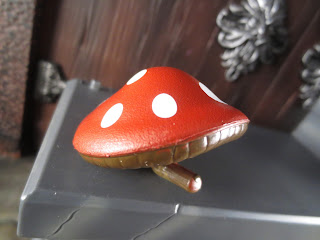 * To help him fend off attacks from...whomever would want to fight a guy in a gnome mask, the Gnome comes equipped with a shield. Actually, it's a mushroom shield. Yup. It 's insanely cool and looks like something from Smurfs, Super Mario Bros., or She-Ra: Princess of Power and I totally dig it. It's a bit heavy but it can be positioned so that the Gnome is nicely balanced. The white speckles on top just give off a such an enchanting fantasy vibe! I love it! 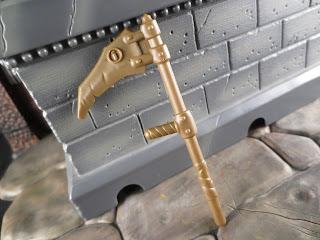 * To give him some offensive ability the Gnome comes equipped with a scythe. It's a really cool scythe that looks like it was forged by someone who knows a thing or two about crafting items. There's actually some cool dents and chips on the chine of the scythe and a grip midway down the snaith. And, yes, those are the technical terms for the parts of a scythe. 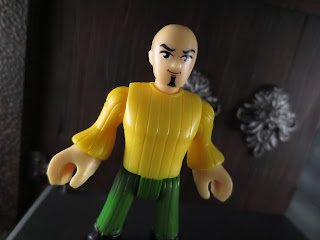 * So what's the deal with this figure? Is it a guy in a gnome mask or can the guy just turn into a gnome. Or does the gnome turn into a regular bald guy? The figure's really plain and I'm honestly sure why Fisher-Price opted for this guy to have a mask rather than just having a shorter body and an actual gnome head. Considering that Imaginext figures are typically unique sculpts it seems like this wouldn't have been a problem. 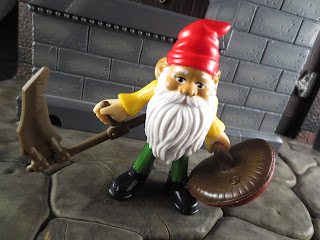 The Gnome has some great accessories and an awesome sculpt on his mask; it's too bad that the base body is really dull. I really wish that Fisher-Price had just made him a regular gnome rather than a guy in a gnome mask. I think the figure would have been greatly improved with a shorter, stockier body. Still, he's a Good and a 1/2 figure and a fun (and bizarre) addition to the Imaginext roster.


I've reviewed plenty of other Imaginext figures from the Collectible Figures Series,  including: