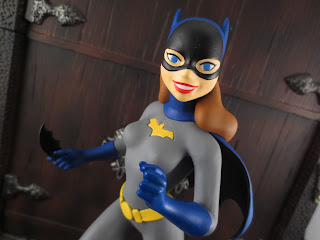 Becoming a fan of Batgirl really didn't happen until I was much older but, as a kid, it's entirely likely that my first exposure to the character was through her appearances in the exceptional Batman: The Animated Series. Today I'm looking at a statue from Diamond Select Toys' relatively new Femme Fatales line. Femme Fatales is a series of 9 inch vinyl statues covering female characters from a wide variety of properties including DC, Marvel, Star Trek, The Nightmare Before Christmas, and even some smaller properties like Hack/Slash. Diamond Select Toys just knows that fans love the Bruce Timm inspired women of the DC animated universe and they've released a number of statues so far including Harley Quinn and Poison Ivy with Supergirl, Wonder Woman, and Talia al Ghul on the way. They're all kind of cool but of course you know that I just had to pick up the Batgirl statue. She's a 2015 release but I just received her in the mail from a pile of loot I had at Big Bad Toy Store. Ready for a closer look? Then join me after the break... 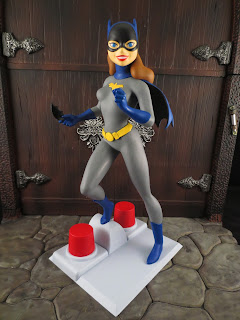 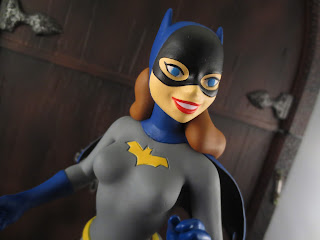 *I really like the approach to this statue that Varner Studios took. They managed to capture the clean lines of the animation of B:TAS and the curvy nature of the heroine while adding in some small details to make the statue a bit more interesting. I like how the Bat-symbol on Batgirl's chest is actually etched into her costume rather than just painted on. 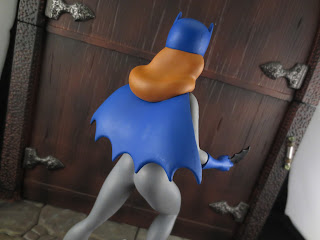 * Here's a quick view of the back of the statue. You can see that Babs' hair and cape are incredibly simple, keeping with the style of the show. Everything looks great, especially the cape. The black interior and blue exterior are nicely painted with little overlap on the edges. 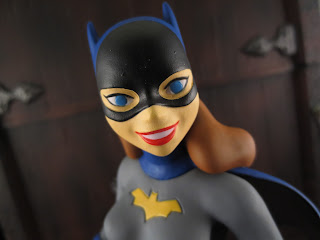 * The headsculpt took me a few days to warm up to but the more I look at it and compare it to still of Batgirl from B:TAS, the more I like it. While I at first thought that her head was too wide, now I'm of the opinion that Varner Studios did a pretty nice job of capturing Babs' heart shaped face. The paint work looks really nice and clean (and much better in person than in pictures, I might add). 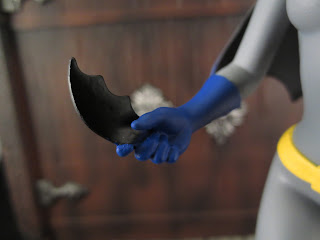 * The pose is excellent. It's not extreme or anything but it does capture Batgirl in a gleeful moment of action. It's entirely in character for the Batgirl of B:TAS to be smiling joyfully as she hops onto a police car to rescue some of her father's men from a group of criminals wielding only her wits, her athletic prowess, her exceptional fighting skills, and a batarang or two. The batarang is simple but well executed. I love the simple, rounded style of this weapon. 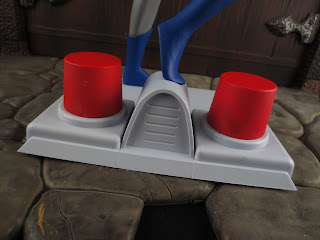 * The base that Batgirl is standing on is pretty cool: It looks like the roof of a GCPD squad car. The design here captures that cool vintage with a slightly futuristic quality that Eric Radomski brought to the series that really helps the show's vision of Gotham City stand out as a timeless yet classic place. The base is a clever choice, not  overshadowing the figure but certainly making the display seem a bit more interesting. There's a problem however... 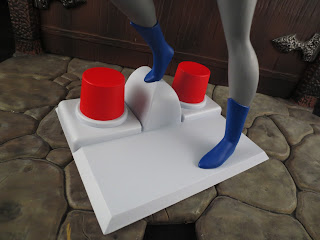 * And that problem is that the most interesting part of the base, the front of the car with the speaker for the siren (that's what I assume it is, at least) actually faces the back of the statue. If you look at Batgirl from the front or side you're just going to get the view pictured to your left. To be honest, it wasn't until I turned the figure around that I recognized the base as a GCPD patrol car. 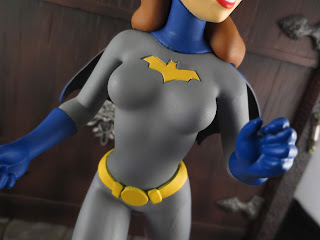 * Look closely at the edges of the paint on the bat-symbol on Batgirl's chest and you'll definitely see some paint slop where the yellow from the symbol runs over onto the gray of the uniform. 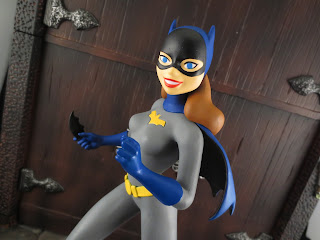 While this isn't my favorite collectible of Batgirl from Batman: The Animated Series (that's still the statue of Batgirl on top of the Batsignal from DC Direct) this is still a pretty nice piece. If Diamond Select can tighten up the paint applications and work on the poses and bases, they could have a nice line on their hands with some real legs (no pun intended). It's interesting that while the trend of the late 90's through mid 2000's was very statuesque action figures, now even the most detailed, collector targeted action figures are becoming much more toyetic. It appears, then, that a new category of lower priced statues such as Femme Fatales and Kotobukiya's ArtFX and Bishoujo lines have come in to take their place. Batgirl here is a Good and a 1/2 item and definitely worth looking into for fans of the character and of B:TAS in general. I'm sticking with Kotobukiya's Bishoujo line as my default DC statue line for now, but I'll be keeping an eye on Femme Fatales to see how things shape up.


Please check out my entire collection of Batgirl reviews right here! I'm not even going to bother listing them all here because I just have far too many!