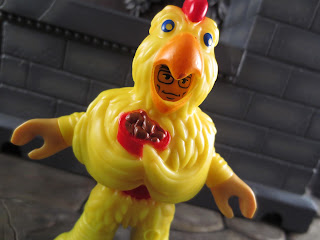 One of the things I like about the Imaginext: Collectible Figures Series is that they really have some strange concepts for figures in the line. I mean, this is an action figure of a fast food employee wearing a chicken costume. Is this what the guy wears at the counter when taking your order? Does he show up on the hour to give balloons to kids? Is he standing outside waving down cars? Who knows? Known only as "Chicken Suit" to the good citizens of Imaginext City, this guy is all about some deep fried goodness. Ready for a closer look at another original recipe from Imaginext? Then join me after the break... 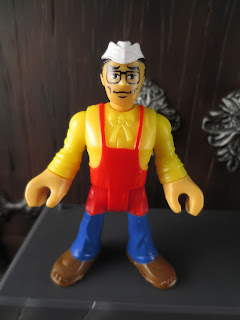 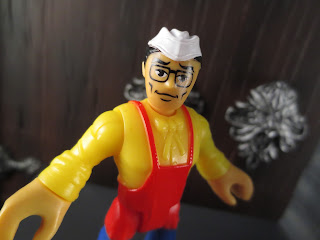 * To kick things off we get...this guy! He's a mild mannered fried chicken employee whom you might recognize from your local Kentucky Fried Chicken. Or Bojangles. Or Popeye's. Or Church's. Seriously, if you a chicken place near you, this guy probably looks familiar. He also looks familiar because he kind of looks like Clark Kent in the face. Maybe the reporting job at the Daily Planet has kind of fallen through? 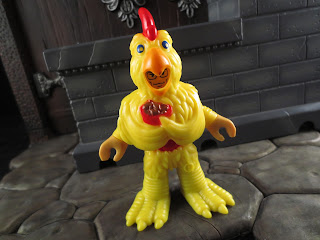 * Of course, the real defining feature of this figure is the chicken suit. Yup. A giant yellow chicken suit. The suit is actually made of two pieces, an armor piece that first over the head and chest and a feathery leg piece that snaps over the front of the lower torso. If you've ever wanted an Imaginext chicken suit for whatever strange reason, you've got one now! 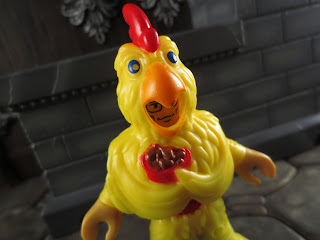 * I love how the guy's face peeks out through the chicken suit's beak. This thing just looks so strange and goofy and the worker's face poking through just enhances that effect even more. Plus, the chicken suit's wings are clutched around a bucket of fried chicken.  Mmm... Fried chicken! Definitely one of my favorite foods. 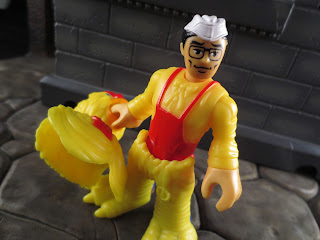 I love that on this site I get to review barbarians, superheroes, monsters, space pirates, and people in chicken costumes. Chicken Suit is a really strange figure, but that's entirely the appeal. He really won't fit in with any normal Imaginext range of product, so he's just in this set to be odd. And an odd duck, er.., chicken he is! This is a Good and a 1/2 figure and a fun one to pick up. I love the weird little things like this that Imaginext releases from time to time.


I've reviewed a number of figures from the Imaginext: Collectible Figures range, including: