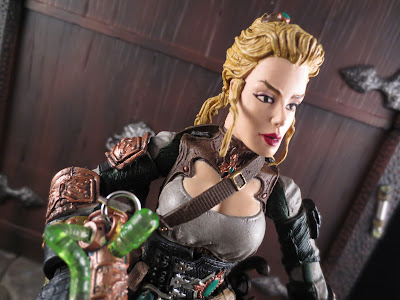 Last summer at Charlotte, NC's Heroes-Con I picked up a figure I had wanted to grab in 2014 but which managed to allude me: Van Helsing from Diamond Select Toys' Universal Monsters Select line. While I've enjoyed a number of their Universal Monsters figures, Diamond's Van Helsing was a bit more interesting to me as he was a radical departure from their movie accurate line. Rather than a kind and pious older professor, Abraham Van Helsing has been re-imagined as grizzled monster slayer. Joining him now is Lucy Westenra, Lucy's best friend from Bram Stoker's Dracula. While Lucy has been depicted in a number of ways (or left out, or combined with Mina) in film over the decades, I can't remember one adaptation where she's a steampunk inspired monster slayer with an acid spewing backpack and the ability to turn into a vampire at will. That's what you get here, though. She's the latest in the Monster Hunter Select subset of the Universal Monsters line. Ready for a closer look at Ms. Westenra? Then join me after the break... 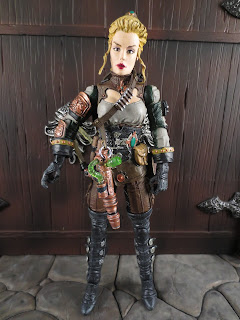 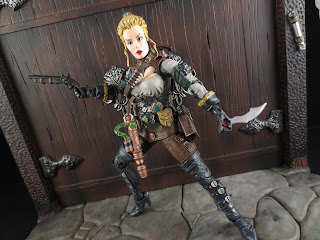 *While Diamond Select has been going back and adding great articulation to a number of the Universal Monsters they released earlier in this line, they got Lucy's articulation right the first time. She's incredibly fun to play with and pose. The amount of stuff she's carrying around inhibits her movement a bit but that's part of the drawback of carrying so much cool stuff around. 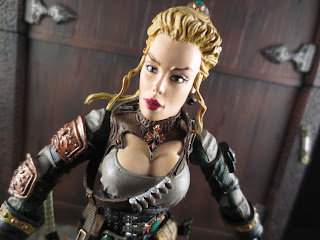 * Lucy is gorgeous and looks ready for battle. I love her headsculpt! She's got her hair tied back for battle and yet she's still had the chance to throw on some red lipstick because she wants to look good while out making the undead just plain dead. 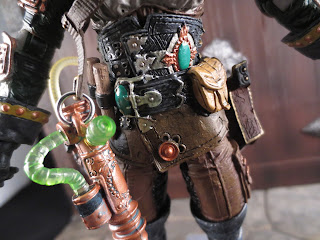 * Jean St. Jean always does fantastic work and Lucy Westenra is another masterpiece. Like the best figures from McFarlane Toys back in the day, Lucy's outfit is just a visual treat. The more you look at her, the more cool details you'll notice. The cool buttons on her leather boots. The bronzed armor on her right arm decorated with images of the sun. Two stakes on her right hip. The jewel adorned cross that covers the leather armor over her neck guard. Some jeweled artifact tucked down into her belt. There's just lots of good stuff here. 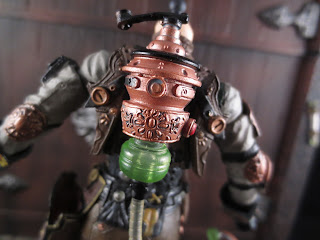 * One of the coolest features on Lucy is her acid backpack. The backpack is permanently attached to the figure, which is a bit of a shame, but it looks so cool it's hard to fault Diamond for not wanting to do anything to ruin it. It looks like the mixture between something Guillermo del Toro would have in his kitchen and one of those backpacks that exterminators wear. The beautiful bronze pack is decorated with an image of the sun and features a translucent green reservoir filled with acid. 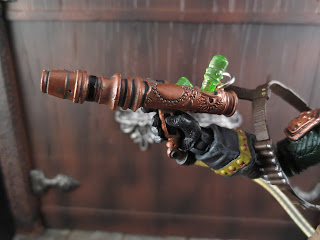 * And here's the gun or wand for Lucy's acid spewing backpack. It's also done in a stately bronze with a nice dark wash. Since it is attached to the backpack it's permanently attached to Lucy, although she can let it hang down via the sling on her shoulder (the gun is attached via a metal ring). This thing is awesome and I especially love the elaborate detailing on the copper with a patina forming over it and the translucent green tubes on the top which hold the next spurt of deadly acid. 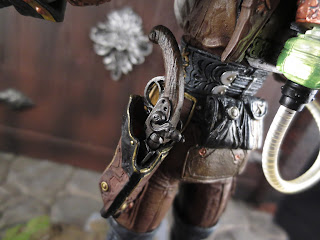 * To further help deal with evil fiends Lucy comes packing heat: A double barreled pistol. The paint applications on this are rather intricate and it looks awesome in Lucy's hand or tucked down in the holster on her left hip. One of the hammers is cocked back while the other is in the normal position. Is Lucy preparing for battle or has she already fired a shot? You decide! 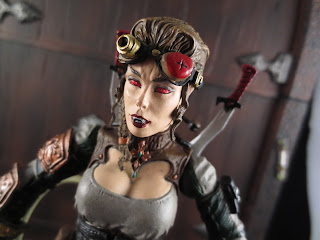 * Here's an interesting accessory: Lucy comes with an alternate vampire head. If you prefer your girls with red eyes, crimson lips, and sharp teeth, this will probably be your go to portrait. The heads swap out easily and both look fantastic but, I have to ask, why does this portrait have brown hair when the other headsculpt is blonde. Did vampire Lucy dye her hair or are brunettes just more evil? Share your thoughts in the comments below! 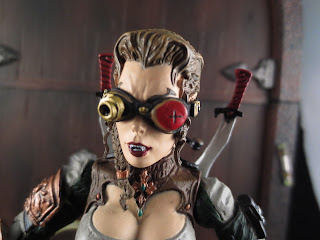 * The cool goggles on the vampire headsculpt are actually removable! I didn't notice it at first but not only can you pull them down to cover Lucy's vampire eyes but you can even remove them from the vampire headsculpt and place them on the human Lucy sculpt. That's where I've got them now; they offer some protection from the back spray of the acid gun she's using. 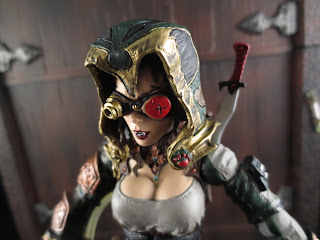 * To further add to the craziness of this figure, Lucy also comes with a hood that can fit over her head. It only fits over the vampire headsculpt but it looks awesome. While the back of the hood looks like it's made from rich, Corinthian leather, the front appears to be fabricated from a variety of differing materials and fabrics. It has a very otherworldly vibe to it, almost as if this were something a gypsy mystic or a medium might wear. The paint work is very nice with appropriate weathering. 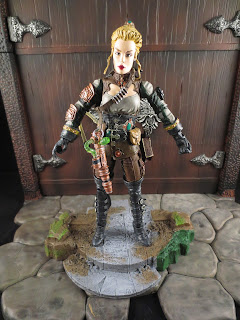 *Go to this link for a second. Notice something different? If you pay attention you'll notice that Lucy is pictured here with a long bronze sword standing atop a base with a cool, ruined arch. Those features are pictured on all of the product images, including on the package. Both of those are features that this figure doesn't have. The sword isn't a big deal because Lucy comes with some cooler weaponry now. The missing arch, though? That's a bit more problematic. While I didn't do that here, I have purchased action figures in the past solely because of the diorama and display base pieces they come with. When I first opened Lucy, I actually thought the arch was missing until I read on Diamond's Facebook that they changed the product after promo images and the packaging had been released. If you buy this online, there's no way you'd know what you were buying was different than what you'll receive without either reading one conversation on DST's Facebook page or reading a helpful review, such as mine! 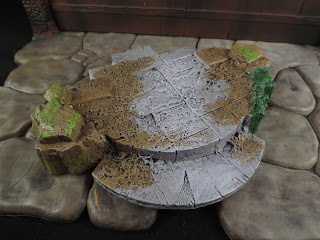 * Even though it's not what was pictured on the packaging, this still isn't a poorly sculpted base at all. The paint's a but muddier than we've seen in the prototypes, but that's just the cost of doing business I guess. What is really disappoint, though, is that the peg which is supposed to help keep Lucy standing is too short. Lucy easily falls off of this base, so don't use this to keep her steady or anything. Seriously, if that's the case, why add the peg, right? 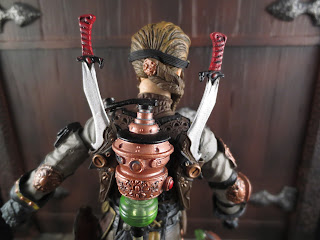 * I love these two cool blades that Lucy sporting but why are the placed so awkwardly? I get that the actual blades are covered by the small sheathes but this just seems like such an unwieldy way to store these, both from an in-universe perspective and for a collector. In-universe, I could imagine that the weight of these would cause them to bounce around and just get in the way far too much. For collectors, storing a blade like this just seems like you're asking for one of the accessories to get bent or to snap clean in half. 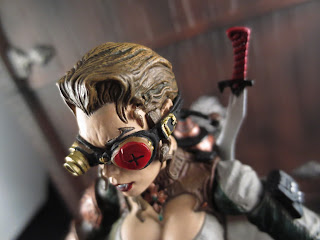 * I mentioned this above but I decided to give it it's own spot on the negatives. So...why is Lucy's hair on the vampire head brown? I really did wonder if this was supposed to be Mina at first and thus this figure could serve as too different characters, but the facial features are exactly the same. Maybe Diamond Select was trying to really differentiate between Lucy and her vamp form. I don't know. The brown hair just really throws me off. 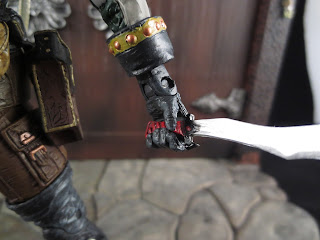 * Lucy's dual knives are really cool but she definitely has a bit of a tough time wielding them. They're a bit loose in her hands so you'll have to work to get them placed securely. 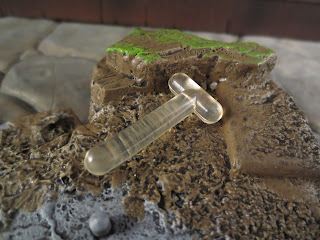 *Ummm...what exactly is this? It's a clear tube with a long, cylindrical shaft with two nubs on the end that looks like it's made of clear glass.  After careful study I've decided that it's some kind of...test tube. Or maybe a toy rocket ship.

All kidding aside about what this looks like, it actually was stuck inside of the alternate vampire head in the package, perhaps to ensure it didn't role out of it's spot in the vacuformed plastic tray. 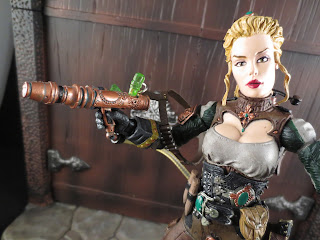 Looking back, I've really had a lot to say about this figure. I think that's because I was really anticipating this one and I really like her. There are definitely flaws, most glaringly the fact that Diamond Select continued to advertise her with the arch adorned base, but the others are more easily overlooked due to how incredible the figure is. Lucy Westenra is just a cool toy and a great piece for fans of classic horror movies. I really hope that Diamond keeps this sub-line going as these are some of the coolest toys released in recent years. She's a Great figure and well worth picking up.

I've reviewed Van Helsing from this line along with two of the Universal Monsters: Dr. Jekyll and Mr. Hyde and The Hunchback of Notre Dame.