Action Figure Review: He-Ro II from Masters of the Universe Classics by Mattel 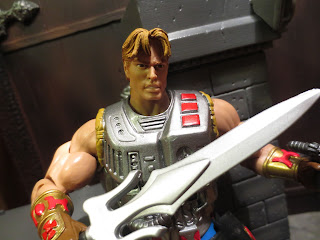 This figure and character has a long and controversial history: Most fans were introduced to the character through the release of the series bible for Lou Scheimer's failed 1996 pitch of a cartoon called He-Ro Son of He-Man. In that pitch, a continuation of the Filmation series, Dare would have been a feral child raised by King Adam and Queen Teela. The He-Ro name attached to the character seemed to be irrelevant to the He-Ro figure from the aborted Powers of Grayskull toyline. When former Matty Collector brand manager Scott Neitlich begin mentioning Dare, this version of the character was what most fans had in line. Interestingly when Dare/ He-Ro II first appeared in the new MOTUC minicomics, he looked more like a concept version of New Adventures He-man; it turns out that there was an earlier 1988 pitch for He-Ro Son of He-Man from Filmation that was truly a precursor to the New Adventure of He-Man series. The series bible was mysteriously shown to a limited number of fans at a He-Man.org get together at SDCC 2014 and was reported on in depth by Penny Dreadful/ Danielle Gelehrter. This rendition of Dare was something we'd never seen before, that's for sure, but it also wasn't how most fans envisioned Dare, a character who already wasn't a popular concept. A few times Scott Neitlich had claimed that Dare/ He-Ro II (as he has now been dubbed to differentiate him from the original He-Ro) wouldn't be part of the 2015 line, but then he wound up being the 2015 figure which set off a complete crap-storm of rage. Is Dare/ He-Ro II a good figure or is he the stinker that so many fans feared he would be? Read on and learn more after the break... 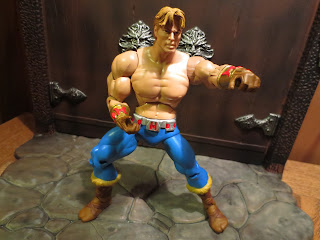 *He-Ro II/ Dare has the same basic articulation that the majority of MOTUC figures have and it all works just as well as you would expect. The articulation is incredibly tight and the quality control is fantastic. Over the past few years MOTUC figures have been some of the most high quality action figures on the market and Dare is no exception. 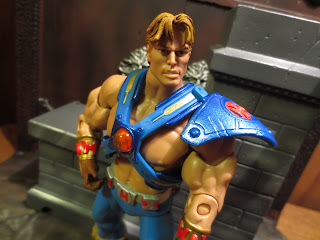 * This figure of Dare is an amalgamation of the prototype New Adventures of He-Man look and the 1996 Lou Scheimer Productions look. Overall, I think it succeeds in being a pretty nice and cohesive looking figure, particularly when using this armor inspired by the 1996 character design. The mixture of space and barbarian elements just appeals to me. I'm also wild about the translucent crystal on the harness: It has the He-Man iron cross in the middle! This guy truly looks like he could have been a main character from a cartoon series in the period between 1988 and 1996, no doubt in my mind! 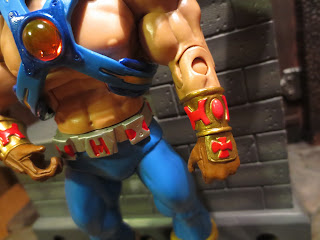 * I really like the style of Dare's gloves, which are reused from Vykron I believe. They not only have the He-Man "H" on the bracers but they also have the familiar iron cross that the classic He-Man armor has on the chest. It's kind of a nice nod to a few different He-Man eras. I'm also digging the color scheme. There's a color connection to both King He-Man and the original Preternian He-Ro thanks to the abundance of red, blue, and gold. All of the paint work is quite nicely applied and looks really sharp and striking. 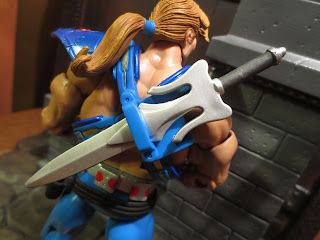 * Dare comes armed with the Power Sword that's styled after it's early minicomic appearances. I really like this piece as it's a bit more angular and wicked looking than the more common Power Sword we've seen in this line since the very first King Grayskull figure. It's a nice, sturdy piece that just looks really cool. Whether you leave it with Dare or give it to any of your other He-Man figures, you should be pretty happy with this. 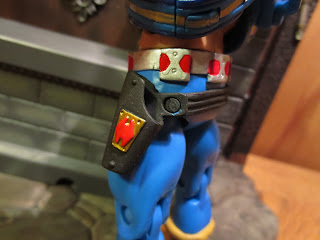 * Like his aunt, Galactic Protector She-Ra, Dare sports a pistol belt with a holster on his hip. It's adorned with a familiar symbol on it and easily fits around his lower waist. 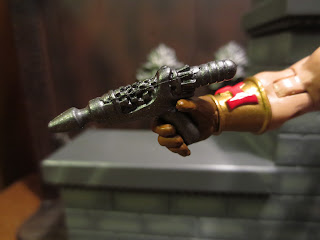 * Here's Dare's blaster pistol. It's small but looks pretty radical. The styling is somewhat similar to the Mighty Spector's  pistol. Actually, isn't the detailing on the midsection of the pistol's barrel of the Mighty Spector's mini cosmic key? Is this some kind of time pistol or something? Maybe it either shoots portals or flings enemies into the past or future? 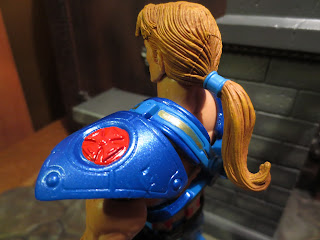 * I'm loving the detailed shoulder pauldron attached to Dare's armor. It's an embellished detail that is present in the 1996 pitch for the show and it looks great here. It's nice and metallic looking and features the classic He-Man iron cross.

* Also, check out the pony tail! It's actually on a swivel joint at the hair tie. Pretty cool, huh? 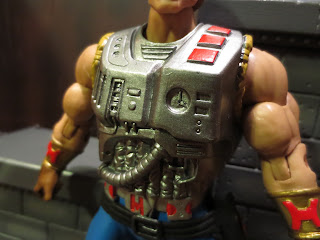 * To tie this figure in more with the 1988 Filmation He-Ro Son of He-Man pitch, Dare is wearing the same armor that He-Man wears in The New Adventures of He-Man, but in different colors that match what we've seen in the MOTUC minicomics. This is the same piece that came with Galactic Protector He-Man and it still looks pretty cool here in a new color scheme. I do prefer the more unique looking 1996 inspired armor, though. 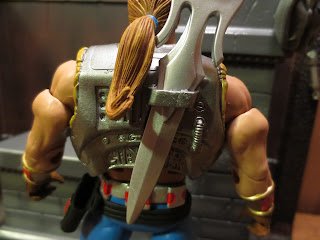 * Here's a quick look at the back of Dare's armored vest. Since it's the same sculpt as the accessory that originally came with the  Galactic Protector He-Man figure it retains the sheathe for the sword. The blade on Dare's sword is a bit wider but it still fits in the sheathe thanks to the rubbery plastic used here. 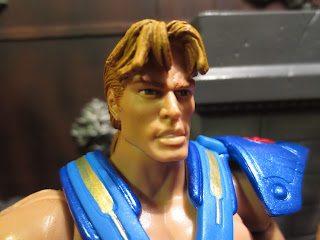 * I like Dare's head sculpt. In fact, I think I like it a bit better than Galactic Protector He-Man's. If you wanted to you could pass this off as He-Man himself but it also definitely fits as a descendant of Adam. Anyone see a but of a likeness to a younger Val Kilmer in this sculpt?

I'm really digging the sculpt, although I do have a problem with it... 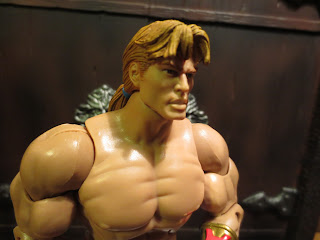 *The only technical complaint I have about this figure is that the head really looks too small. Maybe it's tough to see in a picture but He-Ro II/ Dare really looks to have a bit of a pin-head thing going on. His head definitely could have been a bit larger. If this was an attempt at making him appear younger it failed. 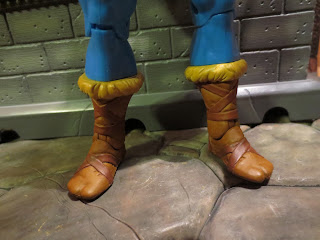 * The 1988 pitch of He-Ro Son of He-Man sounds like it was more "space fantasy" focused, like New Adventures would become while the 1996 pitch seemed more rooted in "barbarian fantasy." I like that Dare has nods to both of these but I'm really not sure that the standard furry booths were the right way to go here. Something about those just looks odd with the space jeans he's wearing. 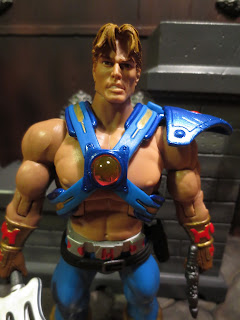 * Technically and design wise, I think Dare/ He-Ro II is a pretty solid figure. There's a lot that I like about this figure and I have to say that I'm really pleased by it. That being said, I absolutely recognize that for fans who have been familiar with the 1996 Lou Scheimer Productions pitch for the character, this really isn't what they had in mind. It's kind of like what happened with the Star Sisters or Battleground Evil Lyn in that it feels like Mattel released an unwanted version of a character/s people were excited about.

It's also the only time I can think of when we've released a "concept" character but haven't seen the accompanying original art. No photos were permitted of the 1988 Son of He-Man series bible, so we have no frame of reference for this character that might help MOTU fans and historians appreciate it a bit more. Rather peculiar, no? 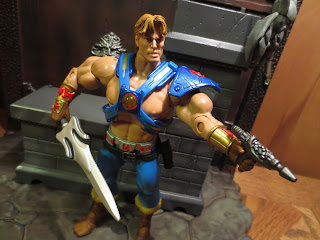 As a character I'm not sure that Mattel executed Dare well in MOTUC and the accompanying minicomics. As a figure, Dare is pretty awesome. The presence of the furry boots and the under-sized head are a bit off putting but the cool accessories and two different chest armor options really add a lot of value. All things considered, I think Dare really is a Great figure in this line.

I've been thinking about why a number of fans have been so upset by this release and, after some thought, I think it's that for many fans Masters of the Universe is a very stagnant property. Lately everyone's attention has been focused on Star Was and as I've been thinking about that property, it strikes me how it's a brand where fans have always been eager to ask "What's next?" or "What happened before?" It's a property where stories can be told with aged characters and before characters are even born. With MOTU I often hear fans saying thing like "If it doesn't involve He-Man, I'm not interested." While MOTU has always been fuel for the imagination and has had some great art and some decent story lines attached to it, it's a toyline first and foremost. Many of us don't want our toys to become obsolete. Like the Filmation cartoon, we're always ready for Skeletor to come back swinging again tomorrow or for a new villain to menace the same heroes again, but we don't want anything to change. Some properties like Star Wars and many comic properties have always been about growth and change; MOTU is about play, pure and simple. It's largely been structured like a sitcom in that the goal of each episode is to return things to the way they were by the end of each episode. Dare represents the property setting out to try and do something different, asking the question "What happens next?"

I've reviewed plenty of Masters of Universe Classics over the past couple of years, including: