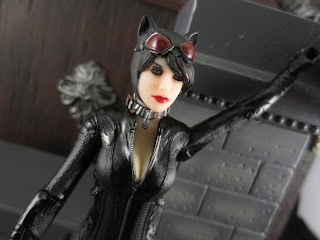 Catwoman has a pretty cool role in Batman: Arkham Knight in that while she has been captured by the Riddler, she's working alongside Batman to help with her own escape. Arkham Knight added some a really fun team dynamic that comes into play whenever Batman joins together with one of his sidekicks and the Catwoman missions are the most fun way to try out this new gameplay mechanism. Catwoman is part of the second series of figures from DC Collectibles' Arkham Knight line and she ships alongside Nightwing, Robin, and Commissioner Gordon. I've had her sitting in my Pile of Loot at Big Bad Toy Store for a month or so and finally got her shipped to me last week. Ready for a look at this new version of Selina Kyle? Then join me after the break... 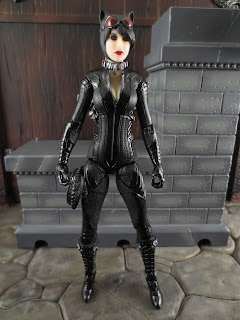 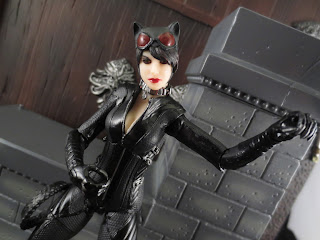 * I have to say that it's been awhile since I picked up a modern Catwoman figure with a sculpt I was really happy with. This one, though, looks great. Selina's face is gorgeous and I love the way her hair, goggles, and hood are handled. Her eyes are intriguing as well, and add a lot of personality to the figure. 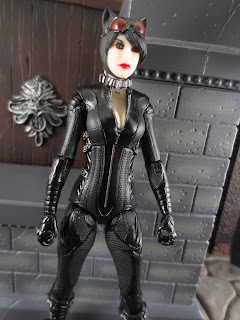 * The detail and paintwork on her catsuit are incredible. I love all of the different colors and textures on her outfit; this is far more than just an all black leather (or pleather) suit. Heck, even her claws have some nice paint apps that make them look like actual weapons and not just long fingernails under gloves. Good stuff all around. 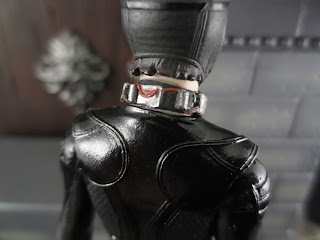 * I like the inclusion of the collar that the Riddler uses to keep Catwoman confined to the orphanage in Gotham. It has a nice sculpt and is actually a separate piece floating loosely over Catwoman's neck. If you don't like it, it'd be easy to cut off, but as it stands it nicely ties this figure in with a specific plot point from the game. 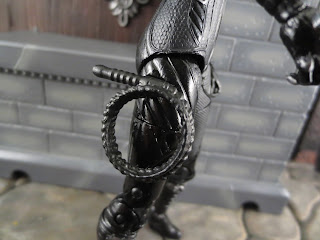 * Catwoman is known for using a whip and DC Collectibles made sure to include two. Yup, Catwoman comes with two separate whips. The first whip is a solid piece that is sculpted in a coil and plugs into a slot on Catwoman's right hip. If you're just posing her running around Gotham or using her claws, this is the look for you. 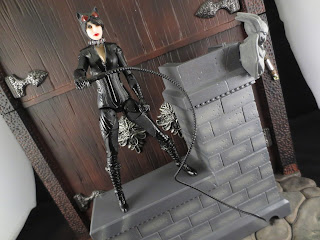 * If you're ready for Catwoman to take action, you'll appreciate this nice extended whip. It's soft, flexible, and great for fending off multiple bad guys at once. I really hope someone takes notice of how DC Collectibles handled Catwoman's whip here and uses it on some Wonder Woman figures. I hate how her lasso of truth always ends up being just a sculpted element and not a true accessory. 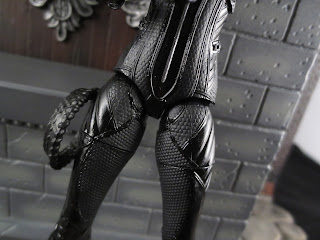 * I love the look of this figure but she has two very serious problems. The first is that the hips are severely limited in their range of motion. The form looks good but the function is quite poor. If anyone needs to be able to take some awesome action poses, it's Catwoman. The Arkham Knight Batman had the same problem, too. 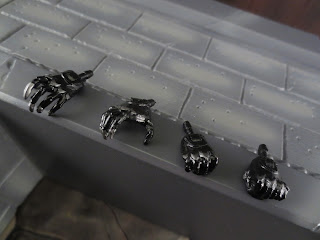 * The other problem I have with this figure is that while Catwoman comes with six interchangeable hands (2 grips, 2 open claws, and 2 fists), I can not for the life of me pull her hands out of their sockets. I'm sure if I used the boil & pop method I could but I don't consider having to use an alternate method a suitable means of using an advertised feature. These look so cool, too. What a shame! 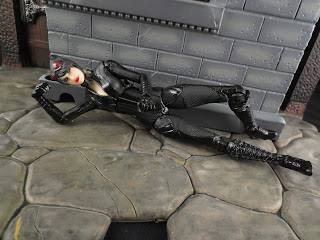 I'm very conflicted by this figure. She looks purrfect and has some great features such as the swappable whips and one of the best costume sculpts on a Catwoman figure ever. On the other hand, her hip articulation is pretty useless (which sucks, particularly considering how good the rest of her articulation is) and I just can't get her darn hands to swap out! At the end of the day, she's still a Good figure, but she should have been a great figure. 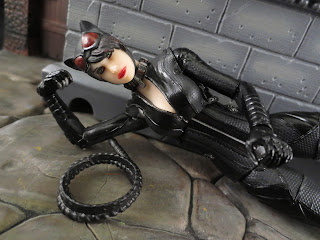 I've reviewed a few other Catwoman figures on here, including:

I've also reviewed plenty of other figures from the Arkham videogame series, including: