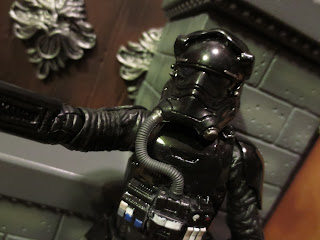 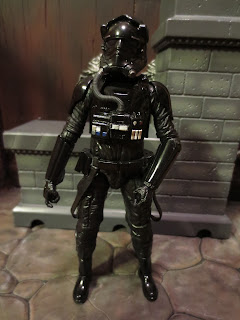 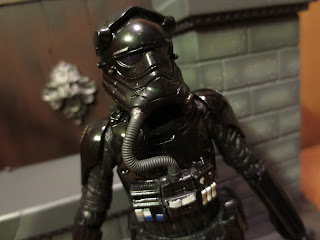 * Hasbro seems to always do a great job sculpting the armored characters in The Black Series and this guy here is no exception. He looks just like what you see on the screen in the film or in the The Force Awakens Visual Guide. Maybe it's because they're all decked out in black but I don't think these guys look as different from their Imperial counterparts as the First Order Stromtroopers do, but they're still a cool design. 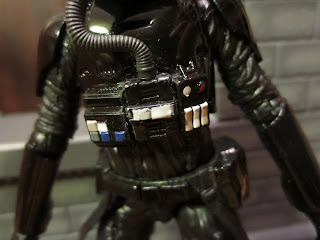 * After comparing the life support unit on the pilot's chest to the entry on TIE Fighter Pilots in my visual guide to The Force Awakens, I can indeed confirm that the paintwork here is quite accurate. Good job Hasbro! 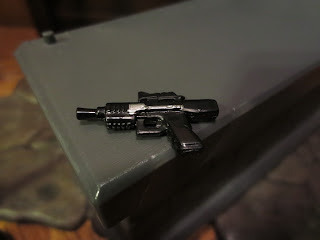 * Here is the SE-44C officer's pistol that the TIE Pilot comes with. It's the same as the Special Forces TIE Pilot's and very similar to General Hux's pistol. It's a cool little piece with a few silver apps to help make it quite film accurate. I have not yet been able to confirm if the windows on the sides of the TIE Fighter roll down so that the pilots can engage in drive bys. 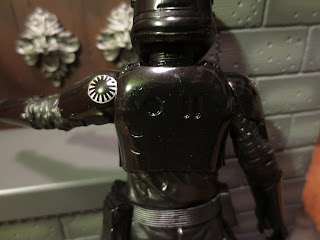 * I got a photo tent for Christmas but I haven't really got it set up yet so some of these photos didn't come out too great. It's tough to take pictures of figures wearing shiny, black armor! I guess that's actually a positive, though, as it means his armor is shiny and black. The rest of his vac-suit is a duller, more matte black, which better suggests that it's made from a softer material of some sort. The First Order insignia on his shoulders is also really neatly applied. 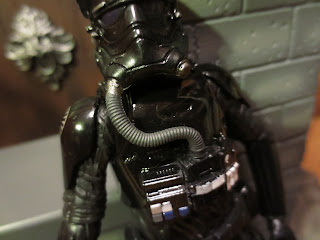 *This isn't a negative per say, but I did want to point out that the hose which connects the helmet to the life support gear on the pilot's chest is connected at both points. I really liked how the Imperial TIE Fighter Pilot had a cord that could detach at one point so that the head could be removed. That feature wasn't replicated here, which is kind of a shame. 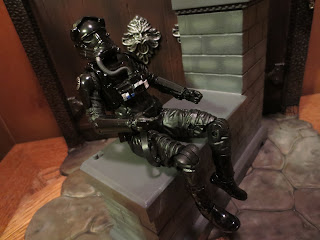 * So, what exactly does a TIE Fighter Pilot really need to be able to do? If you said "Sit in a TIE Fighter" (or some variation of that idea) then you are correct! That's why it is unfortunate that this guy has somewhat of a tough time sitting. When trying to out him into the TIE Fighter, the pouches on his belt really limit the motion in his hips while the ejection harness straps tend to get caught. The straps are more of a necessary evil but the hips are inexcusable. 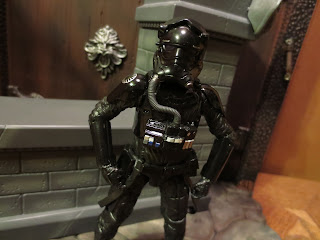 The TIE Fighter Pilot isn't the most amazing figure in this line so far but, if you have the Special Forces TIE Fighter, you're going to want another pilot for it (unless you use Poe Dameron and Finn). This guy is a good purchase to fill up the cockpit and give your other pilot a gunner. He's a nice figure although I wish his hips were a bit more suited for sitting in the TIE Fighter's cockpit. You know, cause that's where this guy needs to be. He's a Good and a 1/2 figure and worth picking up if you're all about guys in shiny black armor and you already own Darth Vader.

I've reviewed plenty of other Star Wars Black figures too, including: