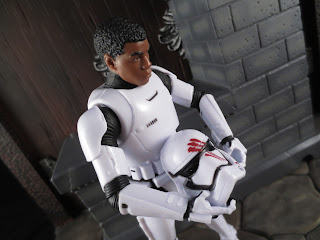 It's only been a little over a month since I reviewed the first Finn figure from the Black Series but now, as I'm reviewing Finn in his Stormtrooper gear as FN-2187 from the first series of 2016 figures,  I'm not flying blind. Having seen the film, read the novelization of the film by Alan Dean Foster, and having read Greg Rucka's Before the Awakening, I have a great appreciation for Finn as a character. John Boyega was a perfect addition to the cast and I'm really excited to see how his character develops over time. I'm really excited that Hasbro has released this version of Finn because while it's simply a Finn head on the already released (multiple times) First Order Stormtrooper body, it represents a crucial aspect of Finn's character and brings into action figure form one of the first images we saw in the original teaser trailer from 2014. I've reviewed the main body a few times now so I won't be focusing on that aspect of Finn as much in this review. I will be focusing on what makes this figure unique, though. Ready for a closer look at FN-2187? Then join me after the break... 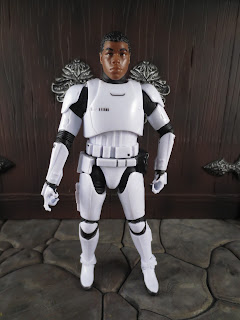 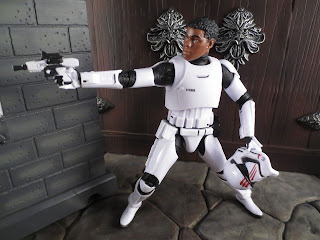 * I love this figure. Finn is so fun to play and put in a variety of poses, even though he didn't do a lot of fighting in the film in this outfit. According to Before the Awakening he was absolutely one heck of a Stormtrooper in training, though, so feel free to reenact some scenes from that book, particularly when he fights FN-2199 (aka "Nines") in melee weapons training under Captain Phasma. 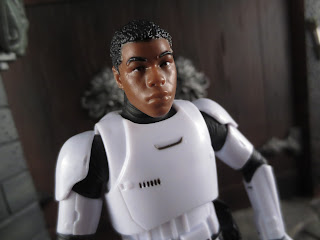 * I'm pretty sure that this is a different headsculpt for Finn than the one that appeared on the Jakku version from last year. It looks to have a slightly more passive expression and differently shaped eyebrows. They're close, but different. The head is molded in a slightly darker plastic which I think makes Finn look a bit more like he's covered in sweat, perhaps reflecting the panic attack he has on Jakku at the village of Tuanul. I think Hasbro has really nailed John Boyega's likeness two times now. Let's hope they get Daisy Ridley's as perfect when the inevitable Rey wielding a lightsaber figure comes out. 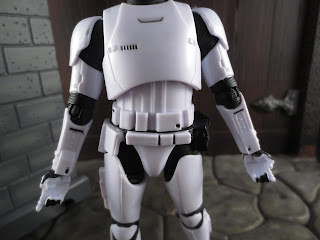 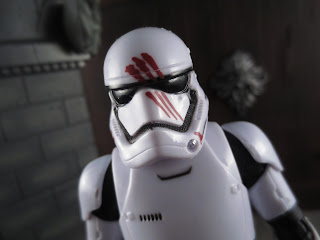 * To me, this helmet is what makes this figure. It is a removable piece but I think it looks great on Finn; it doesn't appear overly large or cumbersome. FN-2003's smeared blood across the face plate is a really striking detail and is something we don't often see on mass market released figures. I love how scene specific this accessory is as it represents the final straw that causes Finn to abandon the First Order. 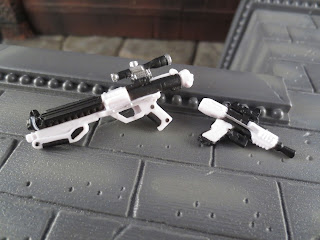 * Finn also comes equipped with the standard F-11D blaster rifle and SE-44C pistol that all of the First Order Stormtroopers have come with so far. They feature nice, accurate paint applications and either weapon can snap into the holster on Finn's right hip. 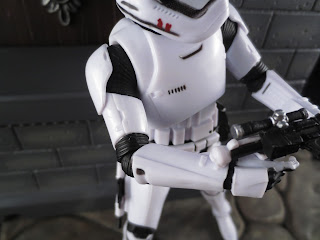 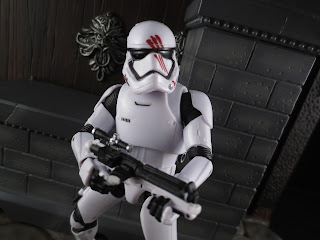 Some collectors might dismiss this as Finn's head on a Stromtrooper body, but I can't help but feel that this is an incredibly significant figure. It's also an amazingly well done figure and might be my favorite figure of the first series of 2016 releases. Everything just works so well here and I feel that Finn deserves an Epic rating. Pick this guy up: He's really, really good.

As far as I can remember, Finn only had three distinct looks in The Force Awakens: The Stormtrooper armor, just his Stormtrooper body glove, and wearing Poe Dameron's jacket over his body glove. Only one to go, right?


I've reviewed the Finn (Jakku) figure already, along with plenty of other Black Series figures, including: