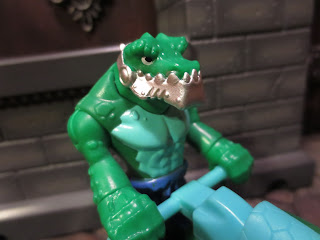 It's been a few months since I've reviewed anything from Fisher-Price's Imaginext line. Series 6 of the Collectible Minifigures is out but I haven't found any of them yet. I did receive two new DC Super Friends Imaginext figures for Christmas, though, and I'm looking at the first figure today: K. Croc & his Swamp Ski. You just might be asking yourself, "Who exactly is K. Croc?" That's actually Fisher-Price's kid friendly way of releasing a Killer Croc figure so that some parent just waiting to be offended doesn't make a big deal about it. I'm not actually sure how long this figure has been out on shelves (he might be a 2014 release) but he's new to me. You just know that I'm always up for the challenging of reviewing a Batman villain. Ready for a closer look at Killer Croc (I'm not calling him K.)? Then join me after the break... 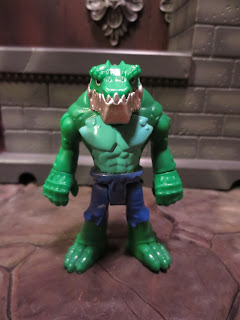 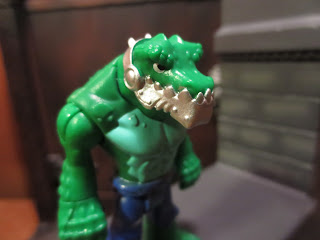 The Positives: Fisher-Price released a K. Croc figure a few years back who came with a Swamp Boat and this is largely the same sculpt. The head is different, however, as this new Killer Croc figure has a metal looking jaw. I'm unsure as to whether it's supposed to be a metal jaw or if it's supposed to be a muzzle of some sort. The chains this guy comes packaged with make me lean towards it being a muzzle, but a metal jaw is pretty wicked as well. Croc makes a nice looking Imaginext figure and his scaly skin and monstrous proportions are nicely rendered here. 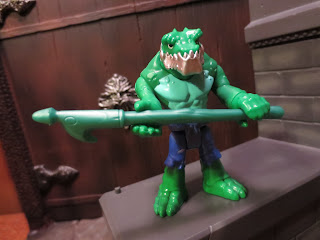 * Not that he really needs a weapon or anything, but it is pretty cool that Killer Croc comes with a harpoon. It's a wicked looking accessory and he can easily hold it in either hand. Or in both hands. 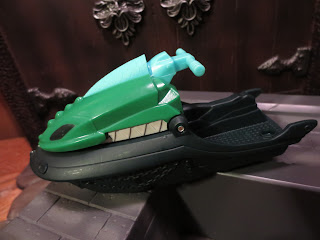 * Here's the Swamp Ski that Croc comes with. It's a decent sized vehicle that's sturdy and kind of fun to play around with. Croc can easily grab the handlebars and take this thing for a spin as he's trying to escape from Arkham Asylum. I love the crocodile inspired paintjob on this. 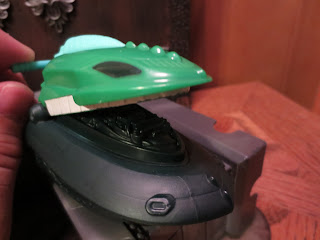 * The top of the Swamp Ski looks like a crocodile's snout. You can see nostrils and some teeth hanging down. Pulling down on the handlebars causes the snout-like body to lift up and a spring-loaded hinge inside causes it to snap back down. It's entirely impractical but a fun little feature (and much more interesting than the standard firing missile so many vehicles have). You can also see the engine underneath, although how the heck do you work on the engine if the Swamp Ski will so readily eat you? 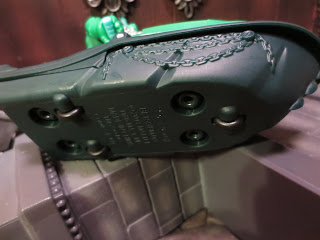 * If you flip the Swamp Ski over you'll see that it has wheels on the bottom. That's a nice feature because it allows it to roll across hard surfaces. 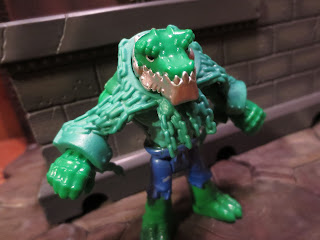 *The only thing about this figure that I find fault with are his chains. The sculpt is nice and they fit him well but wouldn't a nice silver or gray plastic have been better than green? What the heck would a green chain be made out of anyways? I'm not expecting too much realism here but silver chains would have looked so much nicer. 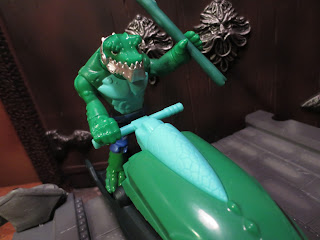 If you're a fan of crocodile men and jet-skis, you're part of the ultra select target demographic for this product. Of course, Batman fans, or just fans of Imaginext in general, will find a lot to love here, too. Killer Croc is a cool character and is definitely one of Batman's villains who is completely swamped with action figure releases in his likeness. He's a fun figure that can be had for under $10 and easily gets a Great rating from me. There's something about these little Imaginext guys that reminds me of the action figures of the late 80's and early 90's, even though they're a bit smaller than those toys were. 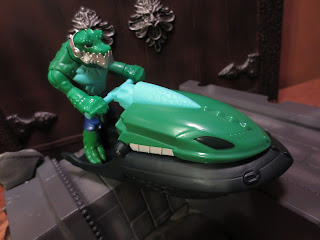 I've actually only reviewed one other Killer Croc figure on the site: The Arkham Origins Killer Croc. I have reviewed some other DC Imaginext figures, though: