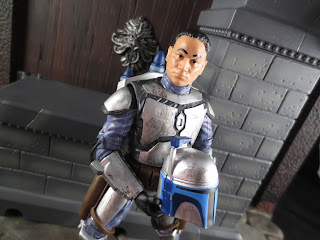 Hasbro released the first set of the Phase III Black Series figures back on September 4th (Force Friday) and since that date every 6 inch figure, other than a couple exclusive items, has been from The Force Awakens. Jango Fett, released as part of the 5th series (or 2016 series 1), breaks that trend. I think ever since the Black Series started back in fall of 2013 we always knew that Jango would be on his way. He's just a visually impressive character. Back when Attack of the Clones was released, Jango Fett was one of the two figures that I think everyone wanted to add to their shopping carts during the midnight madness event. I'm glad that Hasbro has finally gotten around to releasing him because while there are still a number of character from The Force Awakens which I'd love to own, I love how the Black Series can pull from all seven films along with The Clone Wars and Rebels. Jango's a great addition to the line and I was excited to find him as part of an unopened case along with The Force Awakens staples like FN-2187, Han Solo, and a Flametrooper. Ready for a closer look at Boba Fett's dad? Then join me after the break... 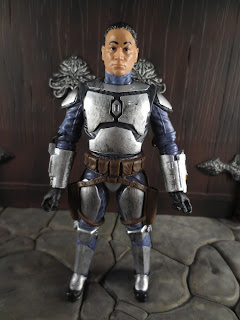 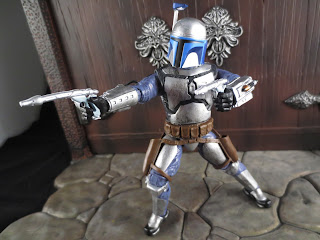 * Not only is Jango Fett as well articulated as any other Black Series figure but he's actually even more so! Because of his gauntlets and the wires that run from them to his shoulders, Jango has the additional articulation points of a bicep swivel and forearm swivels. This is a great figure for posing and playing around with and I've been having a blast with him. 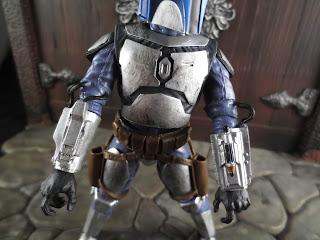 * Jango's armor and flight suit look incredible! Not only is the sculpting accurate but the paintwork is far above the flat colors we see on many of Hasbro's figures. The heavy dry-brushing on Jango's armor and gauntlets looks really nice and gives the figure a very weathered and rugged appearance. I love all of Jango's armaments are included, down to the rocket-dart launchers on his kneepads. 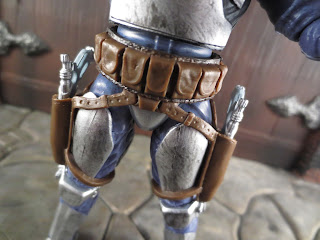 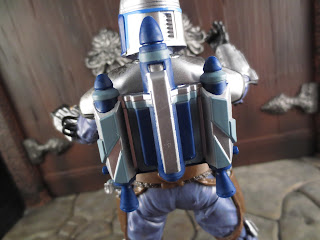 * When Jango Fett confronts Obi-Wan Kenobi on Kamino he uses the Z-6 jetpack that Boba Fett would later famously wield. The jetpack depicted here, however, is the one that Jango uses on Geonosis during his fatal confrontation with Mace Windu. It's a smaller, more heavily armored pack and it looks great. Not only is the sculpt and paintwork great on this bad boy but it also stays firmly attached to Jango's back. It should be noted that Jango and Boba's jetpacks are not interchangeable. 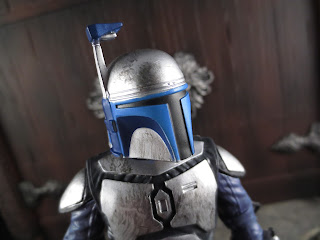 * Rather than an interchangeable helmeted head, Jango Fett comes with a removable helmet. I think it looks pretty slick and appropriately proportioned. Sometimes removable helmets look too large but this one seems just right to me. Plus you can have Jango hold it as an accessory if you want, which is harder to due with an actual swappable head. 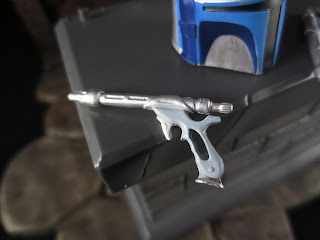 * While I'm only showing one here, Jango does come with both of his WESTAR-34 blaster pistols. These are some rather elegant looking blaster pistols. Compare them to a photo of the props and I think you'll be pretty impressed. They're a bit rubbery and will bend a bit when in the holsters, but they seem to nicely regain their shape after being removed and manually straightened out. They fit perfectly in Fett's hands and just look killer with his blue and silver armor. 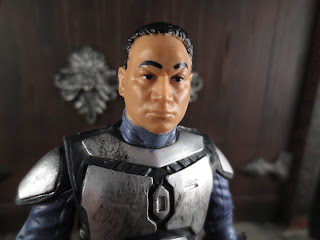 * There's one problem with this figure and it's not the Temuera Morrison headsculpt, which is really pretty good: It's the crazy eyebrows. They just look so fake and awkward. You can even kind of see where the eyebrows are sculpted but paintwork is just a giant stamp over them. Maybe Elaine drew these eyebrows on Jango, just like she drew on Uncle Leo's eyebrows. 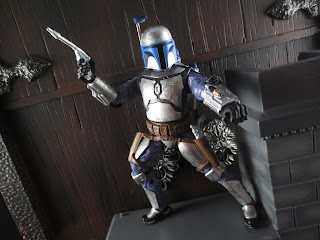 Other than the crazy eyebrows, Jango Fett is one of the best Black Series figures yet. His articulation, sculpting, and paintwork really do all come together to make a very definitive version of the character. While I would have loved to have seen an extra Z-6 jetpack or an alternate head with the earpiece he wears while piloting Slave 1, Jango comes with a nice amount of accessories too. This has been an awesome series of figures and I'm really feeling like Hasbro is starting to gain some proficiency in pulling off this line. Jango's a Great and a 1/2 figure, funky eyebrows and all.


This is the first Jango Fett action figure I've reviewed on Action Figure Barbecue (although it is definitely not the first I've owned). I've reviewed plenty of other Star Wars Black figures, though, including: