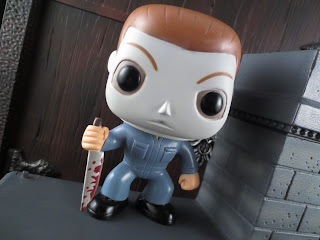 Today's the second day of my Christmas haul coverage and I'm looking at a pretty cool Funko POP! that I received as a Christmas gift from my wife: Michael Myers from Halloween. Halloween is one of those movies that I could watch over and over and over again and so I'm usually a sucker for anything related to it. My wife and I aren't huge POP! collectors although we are starting to amass a small collection over time. One of the things we like to do is to pick up POP! of characters whom we've dressed up as for Halloween or for conventions. Since I was Michael Myers for Halloween 2013 (the same year I wrote this review of the Movie Maniacs Michael Myers!) this guy wound up under my Christmas tree. Ready for a cute, caricatured collectible of one of the big four of horror movie slashers? Then join me after the break... 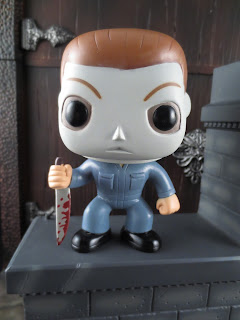 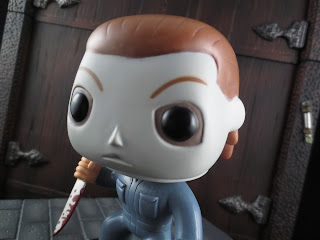 * Since POP! figures already have blank, pale, emotionless faces and the blackest eyes (the devil's eyes!), Michael Myers was a great fit for the line. He honestly looks really good as a POP! because the black eyes and expressionless face fit him. Funko has faithfully rendered Michael's expressionless, featureless mask with it's bizarre rooted hair here, and it just works so well. I like the cuts around the eyes as it helps to convey that this is indeed a mask he's wearing (and not just a reuse of the Captain Kirk POP!). 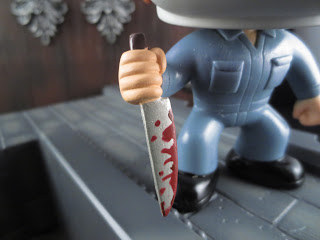 * Michael's knife actually looks fairly sharp and imposing. It's also covered with a fine layer of blood and gore. Look closely and you can see that there actually do appear to be two different colors of blood on the knife blade: The brighter red splashes with some darker red flecks. Is this some absurd attention to detail perhaps, representing that Michael killed folks at different times? Who knows? It's a darn fine rendering of a movie slasher's knife, however, and that really means something in this day and age. 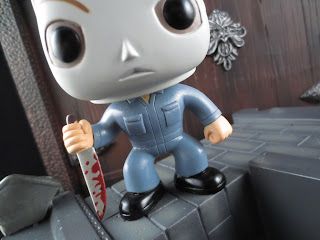 * Michael Myers is a fairly simple guy. He just needs a knife, a generic off the shelf Halloween mask, and a blue mechanic's jumpsuit. His outfit is basic but that's kind of the point, isn't it? Michael could be anyone! I honestly love the scene in Halloween 2 where someone else is wearing a costume similar to Michael's. To convey his height Michael is given a bend at the knee which keeps him in line with other POP!s while still making him seem taller and imposing. He stands up great as well with an excellent sense of balance, unlike most of Michael Myers' victims who tend to fall and trip all the time. 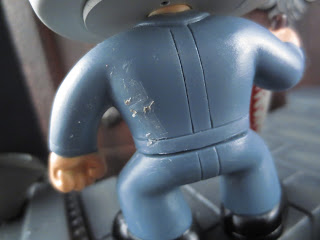 * Vinyl figures often have weird scuff marks and stuff on them and, unfortunately, Michael Myers looks like he got run over by a car or something on his left backside. Not sure where this scrape would have even come from. Since it's not on the front I'll let it slide but it definitely comes across more as damage rather than just a defect. It's definitely not as noticeable in person as in the picture, though. I'm blaming this crap on freakin' Ben Tramer. 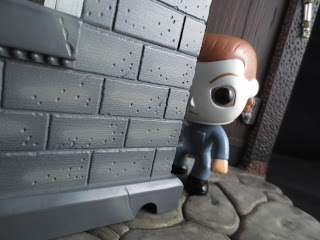 If you have access to the Halloween soundtrack, now's the time to play it.

I'm really digging this Michael Myer's POP! figure. He's actually pretty fun and makes another nice addition to my horror shelf. While Michael Myers is one of the four top dogs in the pantheon of move slasher villains (I place him alongside Freddy Krueger, Jason Voorhees, and Leatherface) he's definitely the character who gets the least amount of merchandise. That's OK, because Michael Myers isn't a sell out. He's cool not because of what he looks like but because of what he represents. The POP! aesthetic with it's minimalist approach actually merges quite well with the concept of Michael Myers as "The Shape" and create a pretty cool vinyl figure. He's Great and well worth checking out. Now I really want a Dr. Sam Loomis POP!, too.

I've reviewed a couple other POP! figures as well: