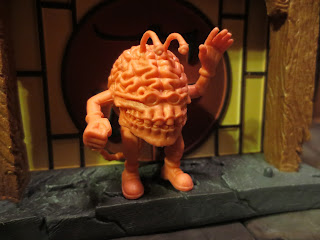 It's time for another minifigure review! I haven't done one in a couple of months so today it's exciting to be looking at another figure from October Toys' OTMFG! series of figures: BrainWaves in the traditional "Flesh" color scheme! I will admit that I failed to realize that BrainWaves was originally released back in October and so I just picked him up last month when I saw the Black version of BrainWaves go up for sale. BrainWaves is a cool M.U.S.C.L.E. inspired minifigure that is a walking, talking brain which you can order through October Toys' online shop for only $2 dollars; if I have to say any more than you're probably not the target demographic for this website and you should probably go read about crafting on Pinterest or something. If you're into brains, minifigures, and .....October, than you're my kind of people, though. Keep on reading and learn more about this cool minifigure after the break... 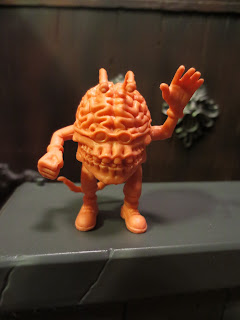 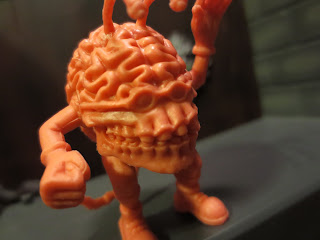 * I love this guy! Designed by Joe Whiteford and sculpted by George Gaspar, BrainWaves is a walking brain with arms, antennae, teeth, and glasses. There's something about him that reminds me of Curly the skeleton from Goosebumps, and that's completely a good thing. I love the teeth and the little glasses. This guy is awesome. October Toys has also really nailed the color and feel of MUSCLE figures and this guy fits in quite nicely with your collection. 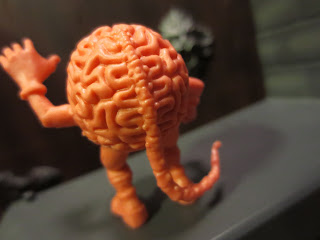 * When you flip BrainWaves around you'll see that he has a spinal cord still attached and hanging down behind him like a tail. What a cool detail! I wonder if it wags when you pet him or say his name? I wonder if BrainWaves smells like formaldehyde? 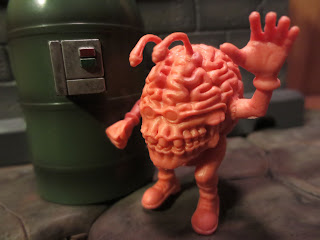 What a design, huh? Seriously, this guy easily looks like he could have been a late in the series villain from the original Teenage Mutant Ninja Turtles line or an early Mighty Morphin Power Rangers villain. Those are both good things and they make me appreciate BrainWaves all the more! This guy is just a small plastic minifigure, but he's an incredible small plastic minifiugre. Seriously, this is an Epic piece for $2. Head on over to October Toys and order yourself one. Plus, they always throw some cool, random art and stuff into the orders.


I've reviewed a nice handful of OTMFG! and OMFG! figures from October Toys, including: