Today I'm continuing a tradition I've been doing for a few years now: Listing off my top 10 favorite (and my 5 least favorite) Masters of the Universe Classics figures of the past year. 2015 was a pretty big year for Masters of the Universe Classics as we not only saw the completion of the vintage toyline and every Princess of Power character but we also received the excellent Club 200x mini-sub, saw a glimpse of Snake Mountan, and learned that there is life for Masters of the Universe in the same scale for 2016. I've been doing this list for MOTUC for a few years now because it's one of the only toylines where I typically buy everything (or almost everything) and there's a ton of product released. Next year, however, has a smaller number of figures being released (or so it seems) and is going to have a number of figures based on the simpler style of the Filmaton cartoon, which I'm just not interested in (the style that is; I love Filmation and the characters), so there may not be enough stuff released to arrant an elaborate ranking. I keep up with these throughout the year with a spreadsheet and change things as my opinion changes and new figures are released. Ready to start the countdown of my top 10 and bottom 5? Then join me after the break... 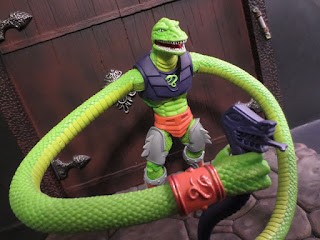 Sssqueeze not only finished up the vintage Snakemen faction but he turned out to be one of those figures who really surprised me. I definitely wasn't looking forward to Mattel trying the bendable appendage thing again but it worked really well. Sssqueeze far exceeds the design of the vintage figure and ended up being an incredibly fun and colorful MOTUC figure. I love being surprised by a figure I wasn't really looking forward to! 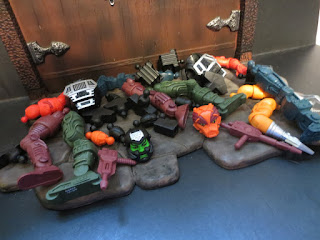 Like Modulok, Multibot is a figure that comes in a number of pieces. He's a robot that can be assembled into a number of different crazy configurations or combined with Modulok to form MegaBeast. Multibot is an excellent example of how Mattel's engineering and quality control really improved in this line (at least for the first half of the year) to make some truly impressive and fun figures. 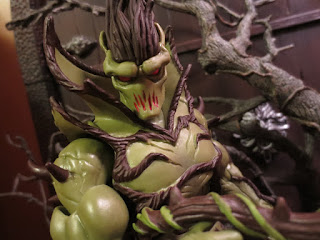 If it weren't for the Club 200x mini-sub, 2015 would definitely have felt like a step-down from the awesomeness of previous years. Fortunately, Club 200x was amazing and Evil Seed here is a simple example of why that was: Awesome paintwork, unique designs, and plenty of uniquely sculpted parts that made each figure feel completely new and unique. While I'm disappointed that the Filmation Evil Seed is a sub exclusive for this year's rather uninteresting He-Man and the Masters of the Universe Filmation based line, I'm content in knowing that I have the superior version of the character. 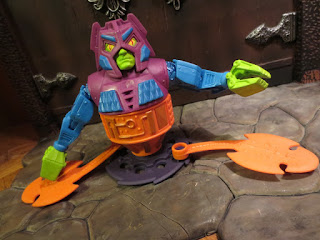 One of the running themes for 2015 seems to be that Mattel made awesome figures of the characters I was less excited for. Packaged with Rotar as the SDCC exclusive, Rotar turned out to be one of the most fun and funky figures of 2015. Amazing engineering and so many different ways to display this evil robot really made this guy a star. That's particularly cool when you realize that many fans (myself included) weren't even aware that Rotar and Twistoid existed back in the 1980s. Mattel screwed up his sale (not offering him in early access to subscribers) but that doesn't affect the figure's quality in the least. 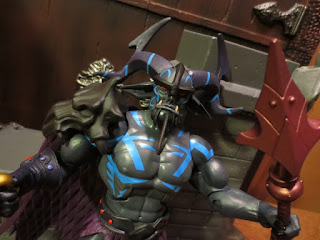 I'll admit that while I love the MYP cartoon series, I always forget about Prahvus. His character just didn't make a huge impact on me. His design and this figure, though, are incredible. Another example of how great the MOTUC aesthetic figures work when combined with the unique elements of the 200x aesthetic. I'm so glad that the 200x bias is gone from this line because figures that look like this will appeal to anyone, not just MOTU fans. His accessories, particular his magic lamp, are also really well done and better than most others this year. 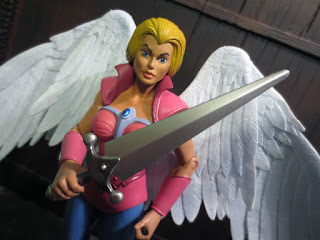 I heard a number of complaints about Angela's eyes from some collectors but mine were perfect. In fact, Angella as a whole turned out amazingly well. She's a gorgeous figure that nicely balances the glamour aspect of the Princess of Power toyline with the combat focus of the cartoon. Angella has a great headsculpt, cool accessories, and amazing wings. They're reused from the DCUC Hawkgirl but they've been given an excellent new paintjob that makes them fit Angella perfectly. We'd been waiting for Queen Angella for a long time and it was great to finally get her. 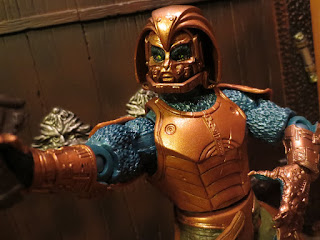 As I've mentioned numerous times, I'm a huge fan of the 1987 Masters of the Universe movie. I love it! Thus, I'm always glad to see characters from the movie make their way into MOTUC. Saurod is an amazingly sculpted figure and is absolutely a perfect example of what the Four Horsemen and Mattel can do when the stars align just right. While he's missing the sparks his vintage figure had, he makes up for it by being an excellent rendition of the character Pons Marr brought to life on the silver screen, even if for only such a short time. 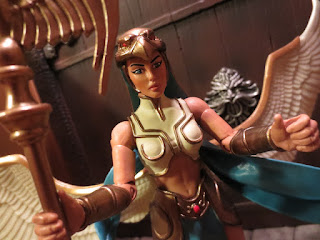 Another character from Club 200x on the list? Yup! That's how good this sub was! It's pretty crazy that while King Grayskull was the first figure in the line back at SDCC 2008, it took over 7 years for us to get his mate, Veena, AKA Queen Grayskull. She's a gorgeous figure who absolutely rocks. Great paint, lots of unique sculpting, some fantastic wings, and a cool staff. 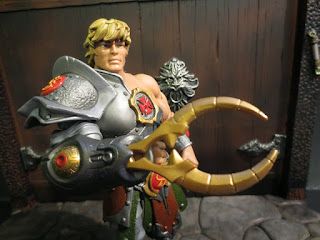 Packaged along with Battle Armor King Hsss early in 2015, Snake Armor He-Man remained one of my favorite figures throughout the year. I think he's actually my favorite version of He-Man released in the line (although the Laser Power He-Man has my favorite headsculpt). He's just so incredibly detailed with really cool armor and some amazing paintwork. While it's a shame that the figure he's packaged with has yet to be completed, Snake Armor He-Man is absolute action figure perfection. 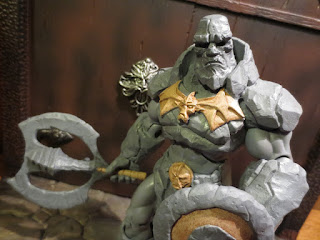 My favorite figure in MOTUC this year had only a few seconds of screen time in the MYP animated series and yet Mattel and the Four Horsemen took him and turned him into the most unique and interesting looking figure this year. He's big, bulky, and has a headsculpt that absolutely conveys what a threat this guy could be. While he's rather unique and modern, the theme of a rock elemental wielding a massive axe and shield feels like such a classic Masters of the Universe element. Callix is absolutely the highlight of the year me. Now...on to my bottom five... 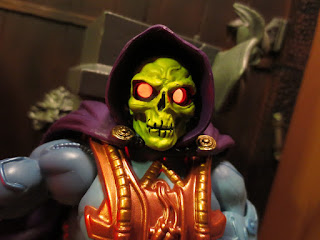 I don't hate Laser Light Skeletor (his sculpt and light-up eyes are excellent) but Mattel really messed this guy up in order to accommodate the light-up features. Skeletor has some severely limited articulation (a swivel neck only, limited arm movement, and no ankle rockers) and an enormous, functionless backpack that serves little to no purpose. This should have been the epic dessert to end the year but it turned out to be one of the most poorly designed figures of the year, breaking the longstanding rule of no action features that limit articulation to deliver a subpar product. 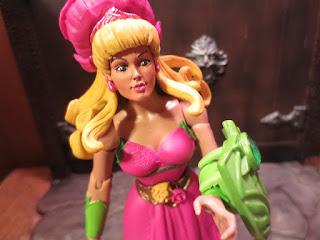 I love Perfuma, but this figure did not do her justice. The head sculpt is wonky and the accessories are bizarre. Why give her a giant flower cannon that she can't even hold? This is probably my biggest disappointment of the year as I was really looking forward to Perfuma, but she just didn't make it through production unscathed. 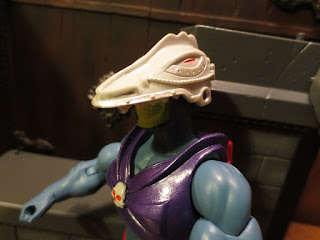 Released in a two-pack alongside Flying Fists He-Man, Terror Claws Skeletor us just a boring figure that was translated from the vintage figure with little to no thought. His claws are boring and cheap feeling, his outfit is bland, and he's not even accurate to the vintage figure. Just dull. 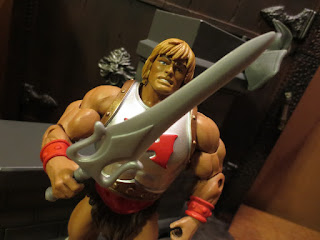 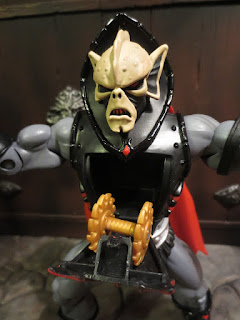 At the end of the day, "Buzz Saw" Hordak is what he is: A vintage based variant that really doesn't look much different than the original. In some ways, Mattel did put some effort into the figure (the fully opening chest was unexpected) but in others, this is a thoughtless repaint (missing the vintage figure's unique belt. Of course, there's also the still bitter sting of knowing this figure was originally intended to come with the upper snake torso of the 200x King Hsss figure which we now have to pay for. While I'm usually not a fan of Mattel including things outside of the subscription (I subscribe because I want everything, not because I want to play games trying to score chase exclusives and such) I do think "Buzz Saw" Hordak was one of the few figures who truly deserved to be outside of the sub. He's just not different enough to really warrant being a monthly or quarterly release. He's a downgrade in appearance from the first Hordak release and, other than his chest, fails to deliver anything new. This would have been the perfect place for a new Imp figure or a Filmation Hordak head extra. Instead, we get the MOTUC equivalent of Malibu Stacey with a new hat.

Oh, and the figure that gets my absolute #0, which means it's so bad that I actually skipped it.... Point Dread Teela!

Yeah, she's pretty horrible. Anyways, that wraps up my Masters of the Universe Classics 2015 run-down. You can check out my 2013 and 2014 rundowns here! Also, stay tuned for a few more top ten lists to wrap up 2015!