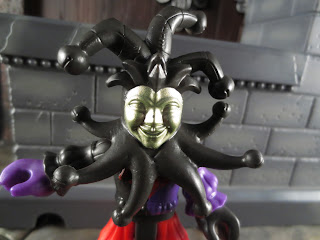 Today I'm looking at the sixth and final figure in Imaginext: Collectible Figures series 6: The Jester! A creepy jester wielding a scythe could work with your regular medieval themed Imaginext figures, your horror themed figures, or even as a henchman for the Joker or Harley Quinn.
As soon as I heard about this wave I assumed that the Jester would be my favorite figure just because I tend to gravitate to creepy, scary stuff. Was I right? Is the Jester the star of series 6? Read on and find out after the break... 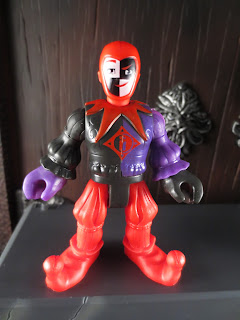 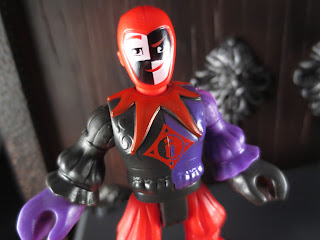 * The Jester is rocking a ruffly, baggy outfit with a red, black, and purple color scheme. There's also an Imaginext "i" logo on the little symbol emblazoned across his chest. The face is very cool as it has a white and black checkered pattern to it. Fisher-Price does a great job on the face printing for Imaginext and this guy is as neat and clean as you'd expect. 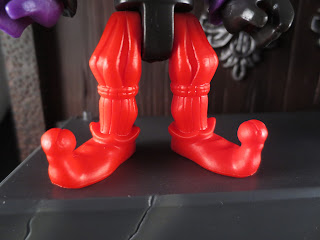 * Check out those shoes, man. That's what I'm talking about!! 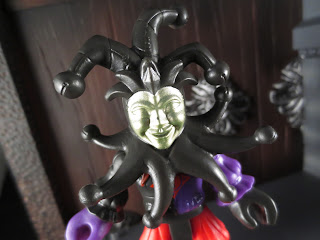 * I really love this mask! Not only is there actually a nice level of detail on it but the face is also given a silver paint application to help give it a bit more presence. It's definitely kind of creepy. My two year old loves masks and calls this a "Halloween mask" but I'm not sure if she's completely comfortable with it. She'll put it on the figure but immediately bring it to me to remove it. 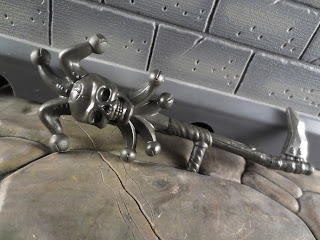 * The Jester's staff is amazing. Looking like a mixture between a Masters of the Universe weapon and something the Joker would have decorating the walls of his house, this is a scythe with a short chine, a mid-handle grip, and a jester's skull at the top of the snath. Really creepy stuff, right? I appreciate the woodgrain texture of the snath and the little crack on the forehead of the skull. There's a little Imaginext "i" on the back of the skull, too. 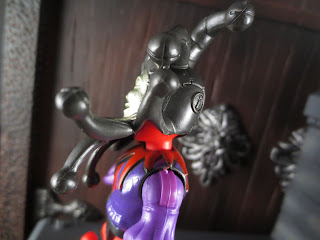 * Usually the head and armor pieces for Imaginext figures are extremely snug but that's not the case with the Jester. His jester's helmet is actually a bit loose and tends to flop around a good bit. I don't know that I've experienced any other Imaginext figures with this problem before but I've noticed about three in series 6 with ill-fitting headpieces. 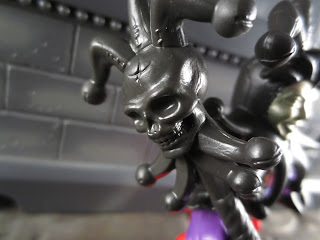 When I started reviewing series 6, I was a little shocked that we only got six figures. While most Imaginext collectors know that these figures aren't really blind-bagged (there is an indetifying number stamped on the package), six figures seems like too few for a blind-bagged series. A parent or child buying these unaware seems pretty likely to end up with some duplicates! If you're able to select your figure, the Jester is definitely on the upper end of the series. I'd give him a Great and a 1/2 rating and place at the top of the list alongside the Dino Mech. Overall, I'd rank this series from favorite to least favorite:
Dino-Mech
Jester
Chicken Suit
Female Pilot
Gnome
4 Arm Alien

I've reviewed many other Imaginext: Collectible Figures, including: