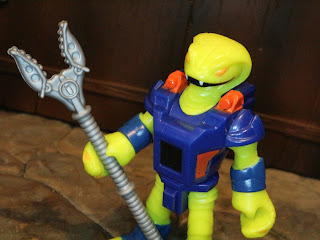 Series 11 of the Imaginext Collectible Figures has been a real treat for collectors of somewhat obscure 1980s toys as we have received homages to the 1982 Adventure People X-Ray Man, the stars of M.U.S.C.L.E., and now even a Battle Beast! Yes, Mattel has given us a pretty direct recreation of Triple Threat Snake from Hasbro's 1986 Battle Beasts line. This is definitely one of the coolest figures in the series and might prove confusing to casual observers as this figure, one might argue, is less of an homage to the original and more of an outright remake. Also odd is that unlike Adventure People or M.U.S.C.L.E. Mattel didn't create this property; Takara did! That's pretty crazy, right? Let's check out this fifth member of series 11 after the break... 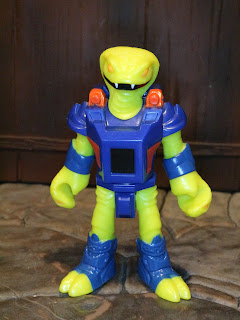 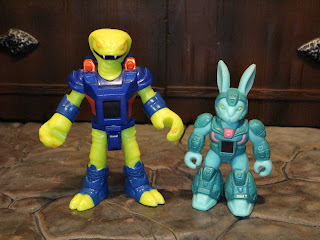 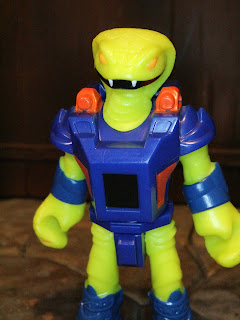 
* This guy is just really, really cool. He definitely looks like some sort of armored snake creature who wouldn't look out of place paling around with King Hsss and the other Snake Men from Masters of the Universe. The colors are spot on (including the cool little red things on the shoulders. Maybe blasters of some sort?) and the presence of the small title on the chest that on the original Battle Beasts revealed their strength (wood, water, or fire). 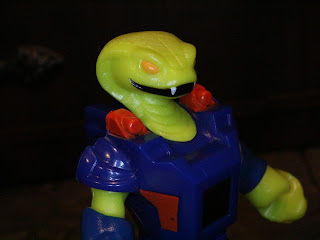 * The headsculpt is pretty cool. Even though this snake has a body, the way the "neck" is positioned definitely makes it look like this cobra is going to rear back and strike. 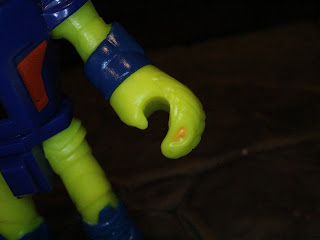 * I actually owned Triple Threat Snake as a kid but sadly I've lost the body over the years, though. I still have at least one of the arms, somehow. All that is to say that just like the vintage figure, this Snake Man has hands that looks like snakes themselves. That's a cool detail and I'm glad Mattel retained it here. 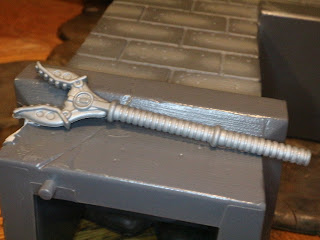 * While the Snake Man's weapon doesn't quite resemble the weapon of Triple Threat Snake (I think it looks more like Big Horn Sheep's weapon) it's still a very cool staff that fits the style of the figure quite well. 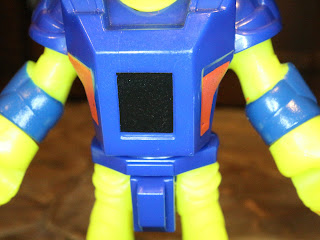 
* Oddly enough, the spot where the original figure had a heat sensitive sticker is just a blank black box. I was hoping that rubbing it would cause something to appear, possibly a stylized version of the Imaginext logo. That would have been an incredibly cool feature, wouldn't it? 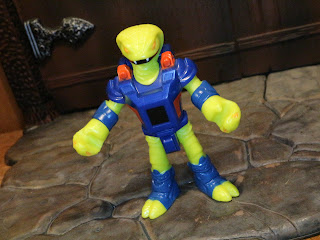 * The articulation on the Snake Man is quite limited. He's not only missing the swivel head (which most figures in this series are as well) but his arms are greatly restricted by the armor. Rather than have the shoulder armor sculpted as part of the body, the armor extends over the shoulders. He can only raise his arms as high as you see them in the photo to the right. The armor extending over the shoulders looks nice but it severely hampers the movement. 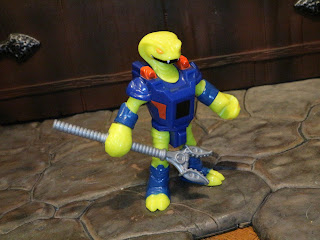 While the articulation is limited, the strong design, sculpt, and cool factor of the Snake Man are hard to beat. I'm still quite shocked that we got this direct remake of Triple Threat Snake in the Imaginext line considering the Battle Beasts property is, I believe, owned by Takara and was never held by Mattel (Hasbro, Diamond Select, and Plastic Imagination! have all held the rights art some point as well). Considering that Mattel always seems like such a cautious company for stuff like this I'm curious as to what happened behind the scenes to make this guy a reality. He's a Great minifigure and I'm glad he's part of the series, though. Maybe we'll see more in the future.

This is the first figure of Triple Threat Snake I've reviewed on the site. For more Imaginext Collectbile Figures, check out the following: