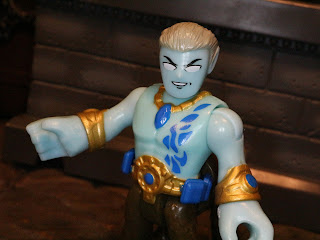 Today is the fourth review of the six figures from series 11 of the Imaginext Collectible Figures Series and this time it is the Centaur Horse Man. Yup. A Centaur Horse Man. He's certainly not the craziest Imaginext figure we've seen but he definitely is kind of unique. Similar to the Woodland Mystic from series 8, the Centaur Horse Man is a blue mythological character who would fit well into a fantasy themed Imaginext series. Imaginext doesn't currently have a fantasy themed series on shelves but if they did this guy would work perfectly with it. Considering that he is blue, I've seen some online commentators suggest that he could be a tribute to the Na'vi from Avatar. That's a possibility. This guy doesn't look like him but he could also be somewhat inspired by Nessus from Disney's Hercules. Wherever the inspiration may come from, this guy is definitely unique. Let's check out the Centaur Horse Man after the break... 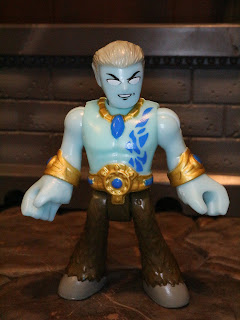 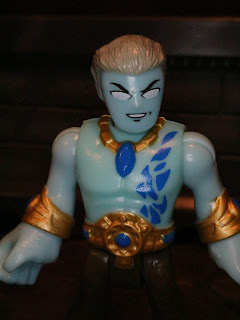 * I really do like the look of the basic figure here. The gold accoutrements, the dark blue tattoos, and the silver hair look really cool. The Centaur Horse Man definitely looks like he could team up with the Woodland Mystic as they have some similar fashion sensibilities. 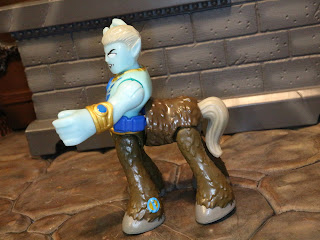 * To make the Centaur Horse Man into a true Centaur, Fisher-Price packages him with the rear half of his body. The rear legs and back consist of a piece that snaps onto the figure's waist. The rear legs are hinged and feature the same furry hooves as the front legs of the standard figure. 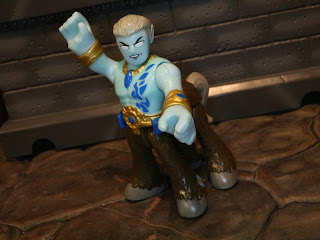 * I'm always happy with the quality and the articulation on these little guys. While they're only about 2 7/8ths inches, they remind me a lot of some of the various toylines of the 1980s and 1990s or Playmobil figures due to the random character selection, the durability, and the accessories. 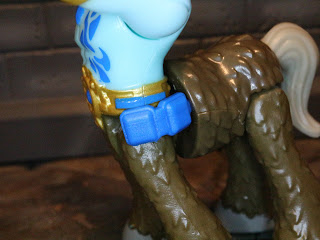 * Rather than being part of the sculpt, the rear legs are a separate attachable piece that connects to the figure via a blue belt. Unfortunately, the belt becomes detached very, very easily. I really think Imaginext should have attached the rear legs to some armor that fits over the figure to help them stay attached a bit better. It's kind of odd that Imaginext has moved away from including the removable armor with the figures, as it was such an integral part of the look and feel of the early figures. 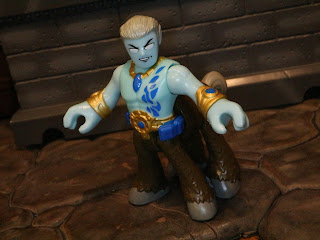 I really like every figure in Series 11 and would probably rank it as one of the strongest series overall, even though it has fewer figures than many of the best of the earlier series. The Centaur Horse Man is a cool design although I'm still not sold on how the rear legs attach to the figure as they fall off far too easily. Still, he's a Good figure although I'd say he's probably the most skippable from the series. Stay tuned because shortly I should have the fifth figure from this series ready to check out soon with the sixth figure coming in as part of the 2018 31 Days of Toy Terror!