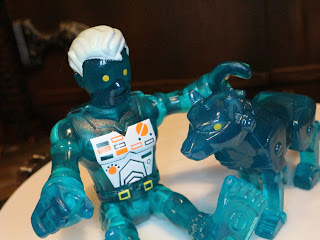 Today I'm offering up the first review from series 11 of Fisher-Price's Imaginext Collectible Figures Series of blind-bagged mini action figures and to kick things off I'm starting with the X-Ray Alien. While the Imaginext line is primarily aimed at kids, Fisher-Price knows that adult collectors are picking these up too so, over the years, they've sprinkled in all kinds of figures that play homage to various beloved toys of the past and other pop culture characters. The X-Ray Alien here pays tribute to the 1982 X-Ray Man from the Fisher-Price Adventure People toyline. Running from 1975 to 1985, the Adventure People featured simple 1/18th scaled action figures of characters such as paramedics, reporters, explorers, and aliens with various vehicles and accessories. The line definitely seems to be the spiritual predecessor to Imaginext so this is a fitting tribute. I honestly am not terribly familiar with Adventure People although I did own a couple of them. I specifically remember my dad buying me the Deep Sea Diver at Toys 'R Us and I had the Alpha Interceptor spaceship that I either bought at a yard sale or found abandoned in a park. There's a lot of love for this line from the folks who collect these so I imagine this figure has excited Adventure People collectors (who appear to have their own convention now!). Let's check out the X-Ray Alien after the break... 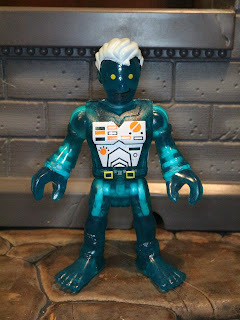 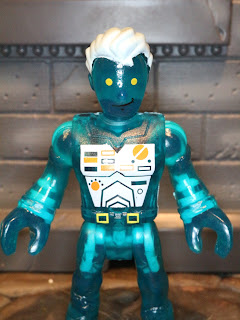 * Cast in translucent blue with painted elements, the X-Ray Alien is truly the doppelganger of the X-Ray Man. His hair is whiter than the original figure but the yellow eyes, chest panel, and belt buckle are nearly identical. This is a sharp looking figure! 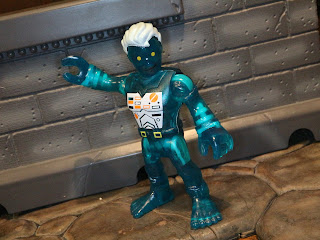 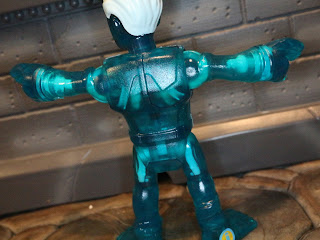 * I not only love the translucent body of the X-Ray Alien but also the way that the joints are clearly visible. It's kind of cool to see how the figure is constructed. Probably for safety reasons you can see how far in the wrist joints are connected along with how the shoulders attach at an angle. 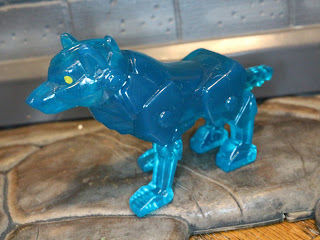 * The X-Ray Alien includes an X-Ray robotic dog with him as a companion. The dog is cast in translucent blue plastic with yellow eyes, just like the X-Ray Alien.  The dog is actually a reused piece, as he was also included with the Future Cop from Series 8. 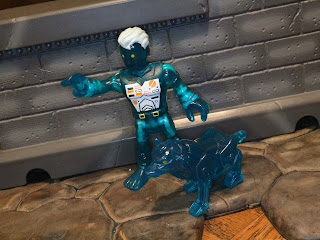 I'm really excited to check out all of Series 11 of the Imaginext Collectible Figures over the next month or so as there are some great figures here. While the series only included 6 sets, these are some of the strongest releases in a year or two. If you're looking for the X-Ray Alien, which is a Great figure, look for the number 54 stamped into the top of the foil package a the rear. I'm so glad that Fisher-Price doesn't really sell these blindly, as that would get old! This guy is a cool figure and nice homage to toys of the past. Now, a few of the figures in the new series are kind of spooky so I'll be delaying their reviews until October to tie into this year's 31 Days of Toy Terror! There's more to come so stay tuned!