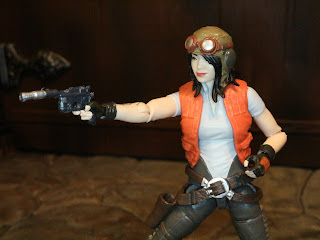 Don't be alarmed! This isn't a 6 inch scaled The Black Series version of Doctor Aphra! It is, indeed, the 1/18th scaled version of Doctor Aphra from the newly reignited Star Wars: The Vintage Collection. Series 2 and 3 of the Vintage Collection continuation just began hitting stores within the past week or so and I was stunned to walk into my local Wal-Mart Friday night and stumble on series 3. I haven't purchased a 1/18th inch Star Wars figure in two years as I mostly just collect the Black Series but I really wanted Doctor Aphra. I absolutely am loving nearly everything that Marvel is putting out in their Star Wars comics and Doctor Aphra is one of the best newly introduced characters. She's a rogue archaeologist with a lot of flaws but there's something inherently charming about the character, too (many others must have agrees as she won a fan's choice poll to earn a slot as a character in this series). The new Marvel Star Wars is absolutely one of my favorite Star Wars things ever and I'm really hoping that Hasbro continues to mine it as a source for more action figures (especially in the Black Series). While this figure isn't going to turn me into a Vintage Collection figure again (even though I still have plenty of my favorites around from the original years of the line). Let's check out Doctor Chelli Lona Aphra after the break... 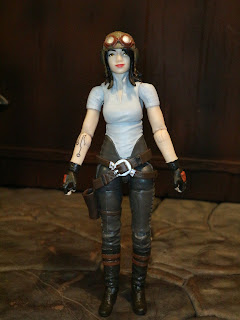 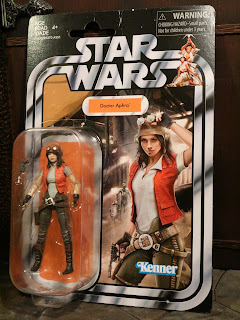 
* Let's start by showing off the Vintage Collection which is some of the best looking packaging around. Hasbro has been using it off and on for years and it continues to look astounding. Interestingly, while Doctor Aphra is a Marvel Comics based character, she has been given the standard Star Wars card logo. Some of the Expanded Universe figures were given the "Expanded Universe" designation so it would have been cool to have seen something more unique, though I couldn't tell you what that would have been. Doctor Aphra was released in a three pack at SDCC 2018 this summer along with BT-1 and 0-0-0. So far as I am aware this is the same figure as the Aphra from that set except she's by herself. 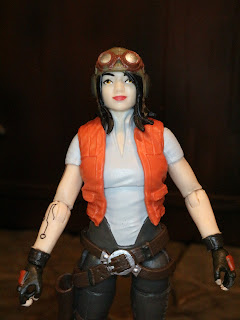 * I love the sculpt here! Doctor Aphra has a very unique vibe to her removable red vest and her old school pilot's cap and googles, yet she still has that traditional Star Wars look to her. I like the way her pants sit higher up on the sides and how the vest fits over the shirt. She's a great looking rendition of the character. 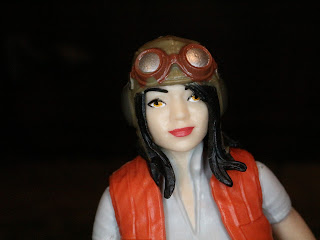 * Since she comes from a comic and has been depicted by many different artists (especially due to various covers) there isn't the same level of "accuracy" required as there is in capturing a figure based on someone portrayed by a specific actor, say. Still, this is easily recognizable as Aphra. She's quite pretty with a great roguish smirk and definitely appears Asian. Not that Asia is a place in the Star Wars Galaxy but, according to creator Kieron Gillon, if she were cast in a film she would be played by an Asian actress. Does that make sense? The paintwork is very clean and streets ahead of what we've seen on many of the 1/18th scaled figures released recently by Hasbro. 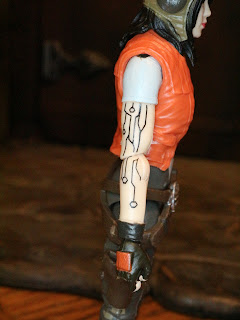 * Doctor Aphra's unusual tattoos are also very nicely rendered. The lines are clean and highly visible, even looking good despite the fact that they run across the elbow joint. 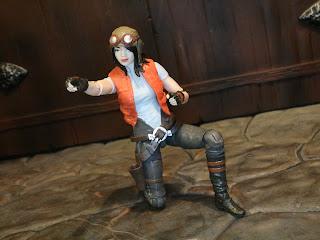 * Aphra's articulation is great. Her right hip is a bit inhibited because of her holster but everything else works like a charm. She feels like a very high quality, durable figure and you can get her into some incredible poses. This is so much better than the 5POA figures that Hasbro has largely been putting out over the past few years. 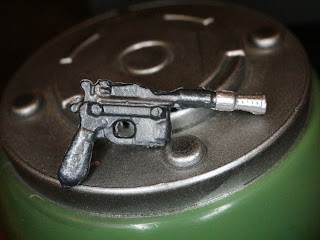 * Since Doctor Aphra doesn't mind turning to violence to solve her problems, she comes wielding her blaster pistol. It's a solid sculpt and even has a silver paint app on the muzzle. She holds it perfectly. 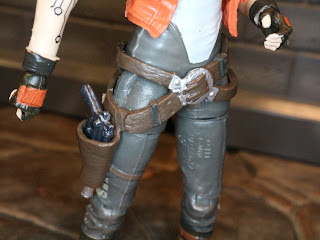 * Her holster is rather cool looking and her blaster pistol fits right in for a snug, secure fit. 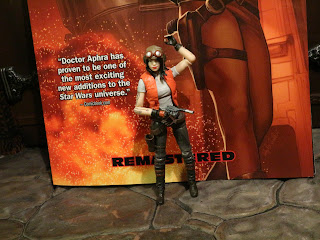 Despite your feelings on The Last Jedi, which I know has divided the fan community like Lisa tore Johnny apart, I still think currently we're getting some amazing Star Wars stuff, particularly for those of us who grew up imagining the further ongoing adventures of the main OT cast. While it just ended Rebels was incredibly fun and nearly every Marvel title is just a blast. If you haven't read them you gotta give them a try. They're incredible and pay love to all eras of Star Wars. That being said, Doctor Aphra is a cool figure from this new era of Star Wars. She is well done and a Great and a 1/2 addition to the line. Hopefully Hasbro continues to pepper the line with more Marvel characters!

This is the first action figure of Doctor Aphra that I've reviewed. For more figures from Star Wars: The Vintage Collection, check out the following:
Imperial Scanning Crew
Posted by Barbecue17 at 9/23/2018