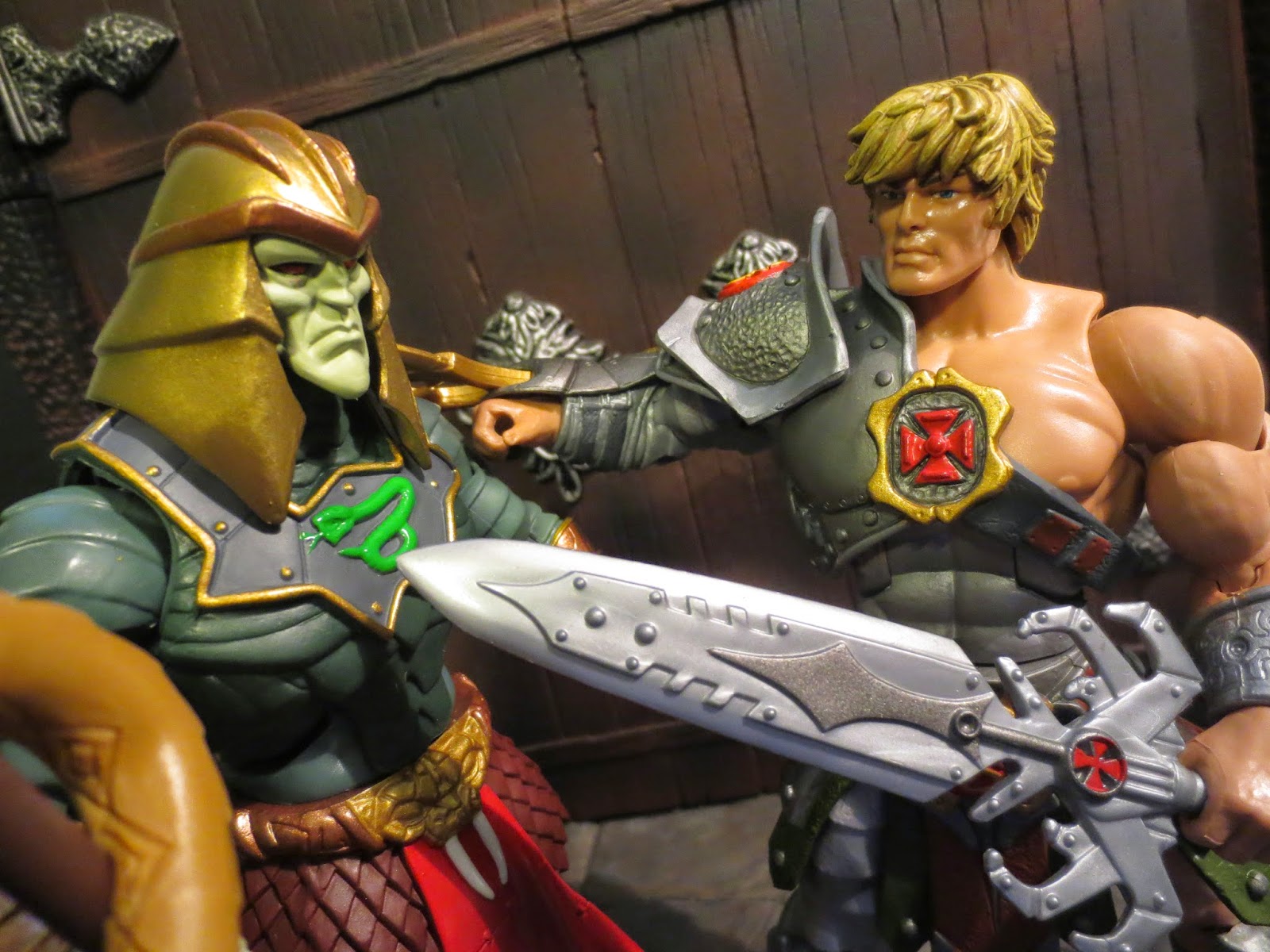 Today I'm looking at the newest deluxe quarterly release from the Masters of the Universe Classics line: The Snake Armor He-Man and Battle Armor King Hsss two pack. This was one of the best surprises shown at SDCC 2014 because most collectors did not expect to see much more 200x related product. From everything we were told by former brand manager Scott "Toyguru" Neitlich, Mattel higher ups seemed to have an adversarial relationship with the 200x incarnation of Masters of the Universe and were actively vetoing its inclusion in the line. While elements of the bios were heavily influenced by the Mike Young Productions animated series and certain 200x inspired characters and weapons were included, it began to get frustrating when customers were told repeatedly that the 200x style (referred to as anime hyper detail) was retired. Fortunately, with the introduction of Club 200x and this two pack, it seems that era is once again wide open. These two figures are variants of previously released characters based on appearances from the 200x toyline. Ready for a look at Snake Armor He-Man and Battle Armor King Hsss? Then join me after the break... 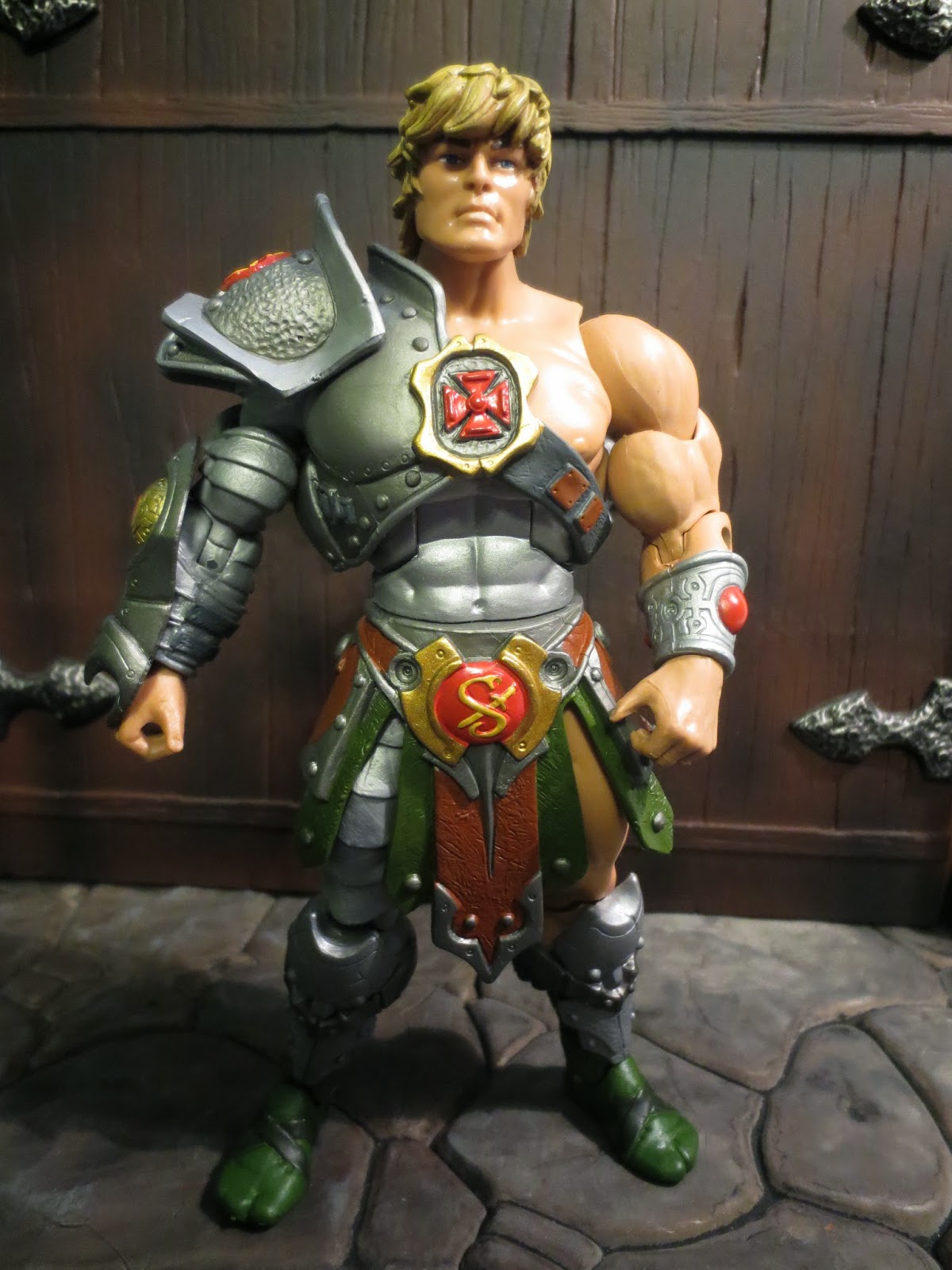 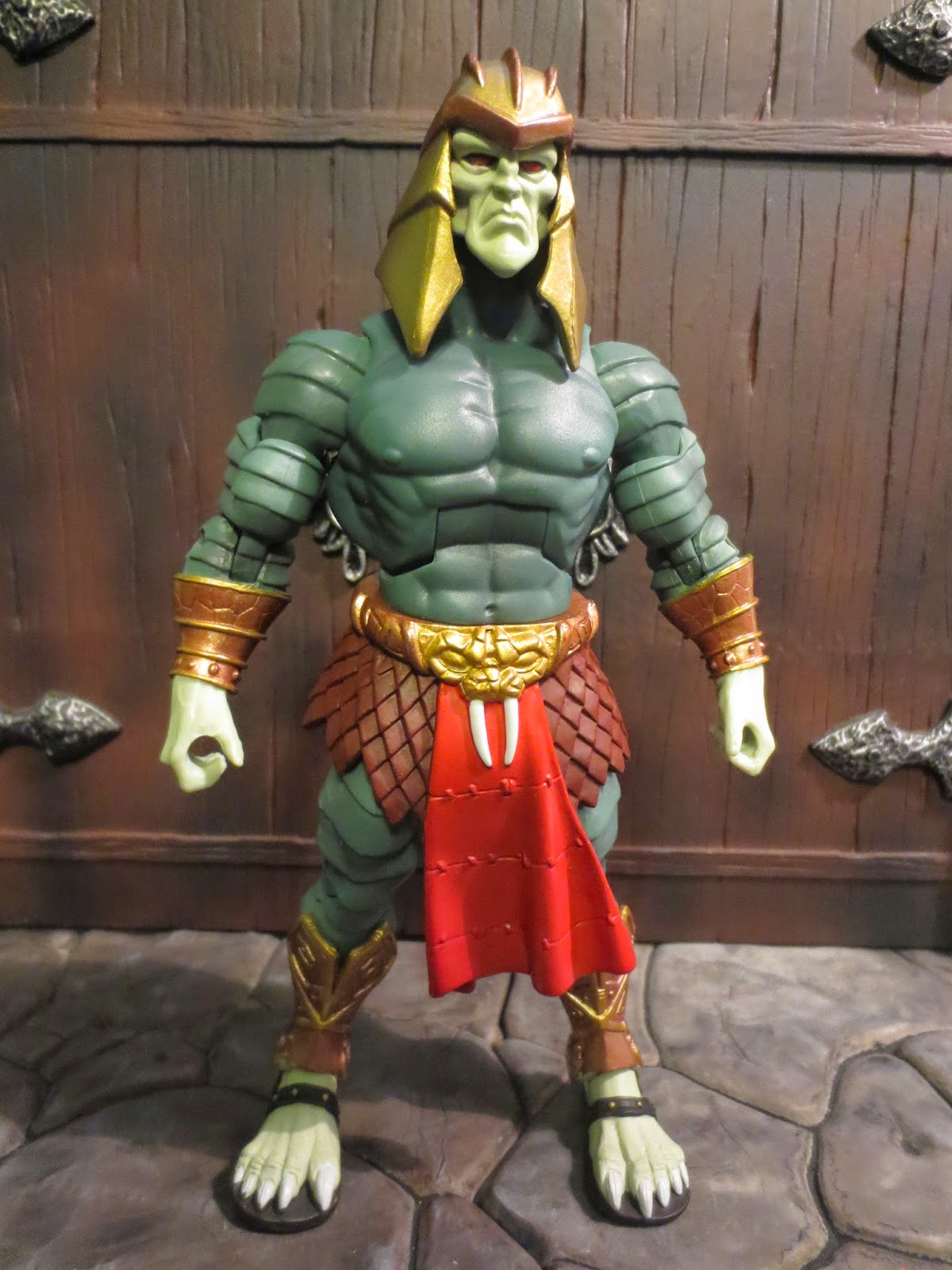 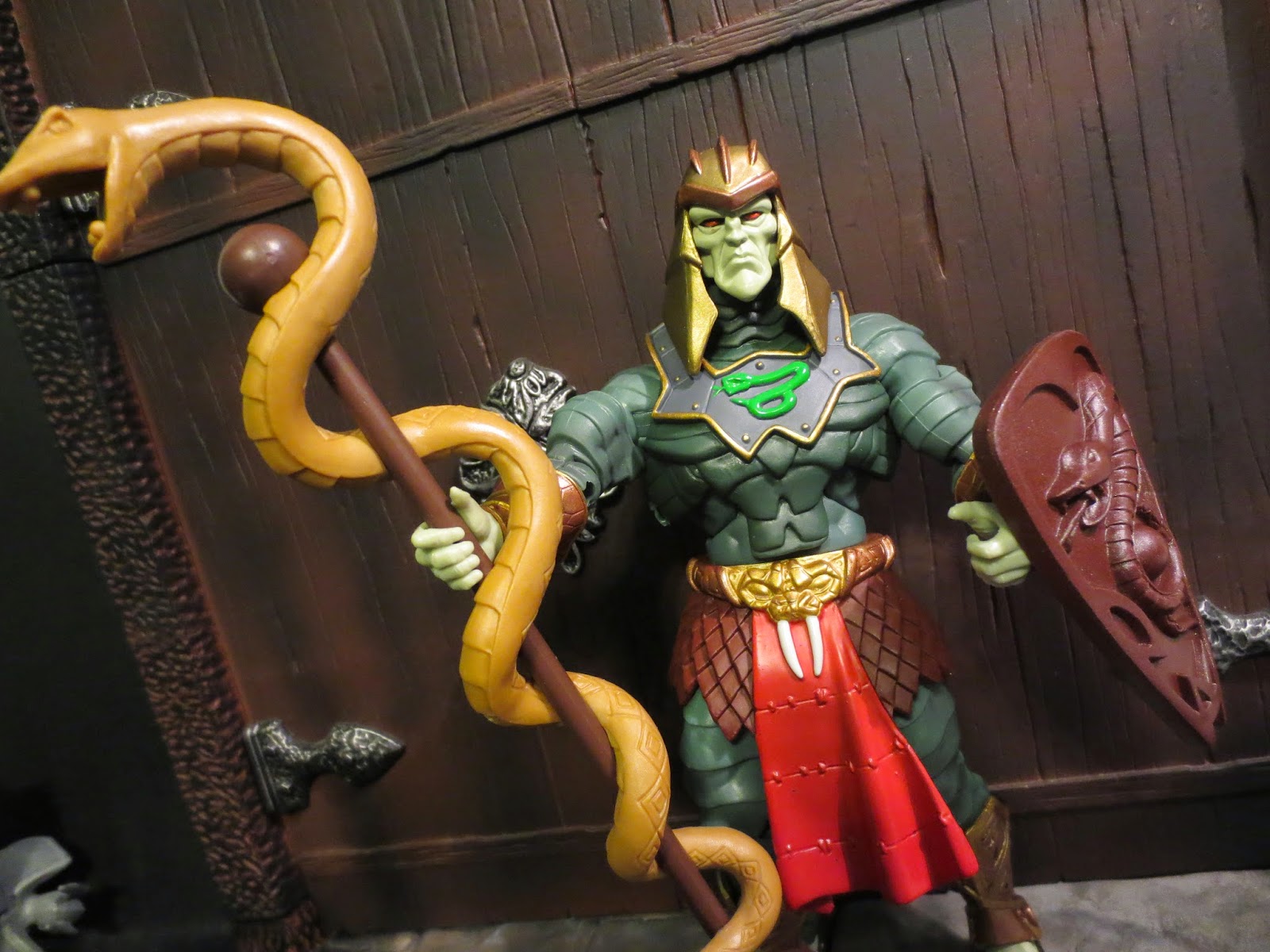 
*Both of these figures perfectly capture the 200x style I've always wanted to see in MOTUC. They're not crazy angular and exaggerated where they look out of place with the rest of the MOTUC line but they still retain the outfits and design elements from that respective incarnation. This is what 200x fans have always wanted in 200x MOTUC figures and it's great to see that Mattel has finally really jumped on this. We've been getting some 200x characters throughout the line but these are really the first true variants (other than just alternate heads and an extra costume element or weapon). 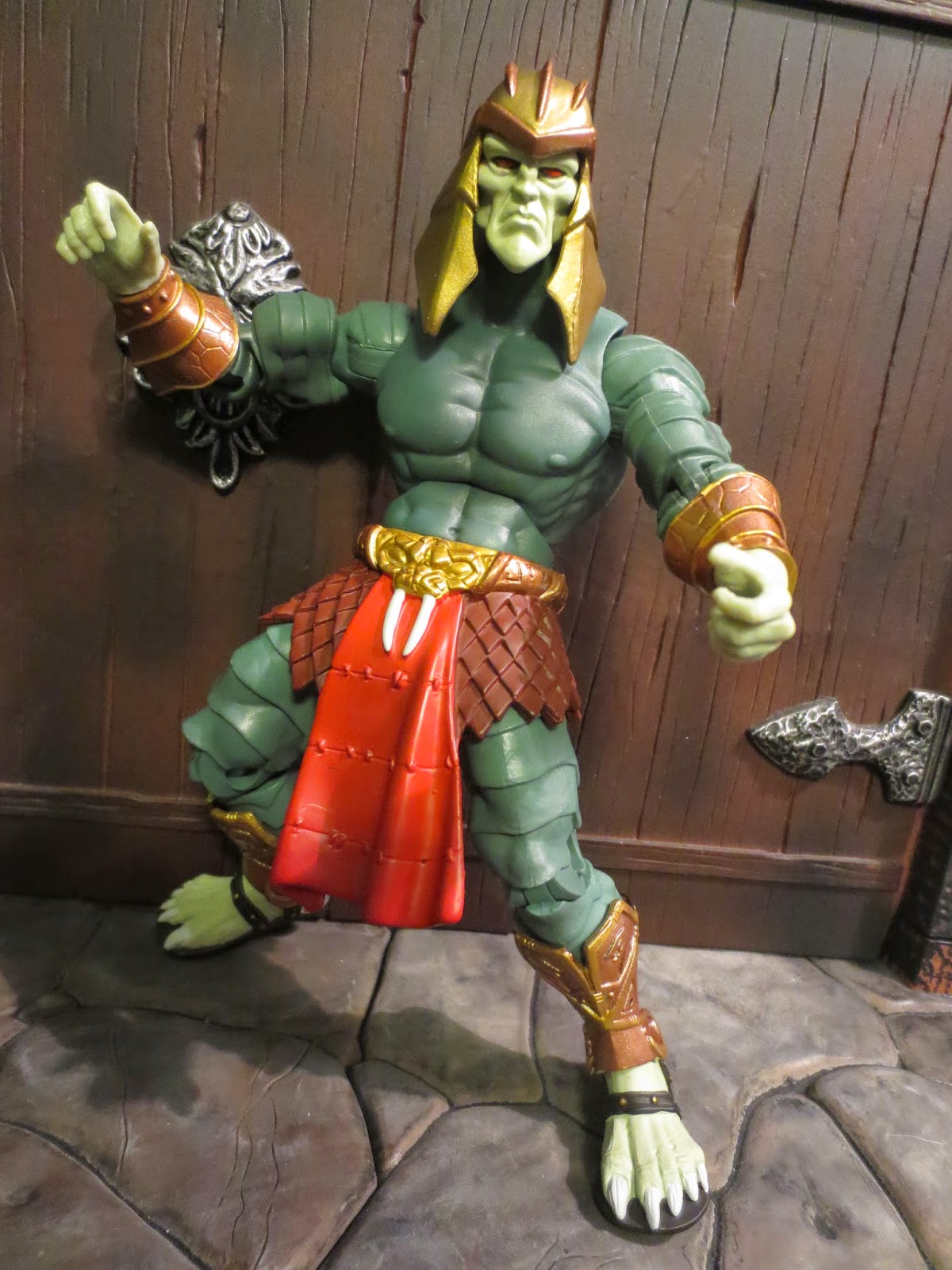 * Both He-Man and King Hsss are fun to pose and play with. They feel solid and sturdy; I have no concerns about breaking these guys whatsoever. In a minute I'll mention a few missing joints on these guys, but overall I'm quite pleased with how the articulation was woven into the designs of these more elaborate and detailed uniforms. 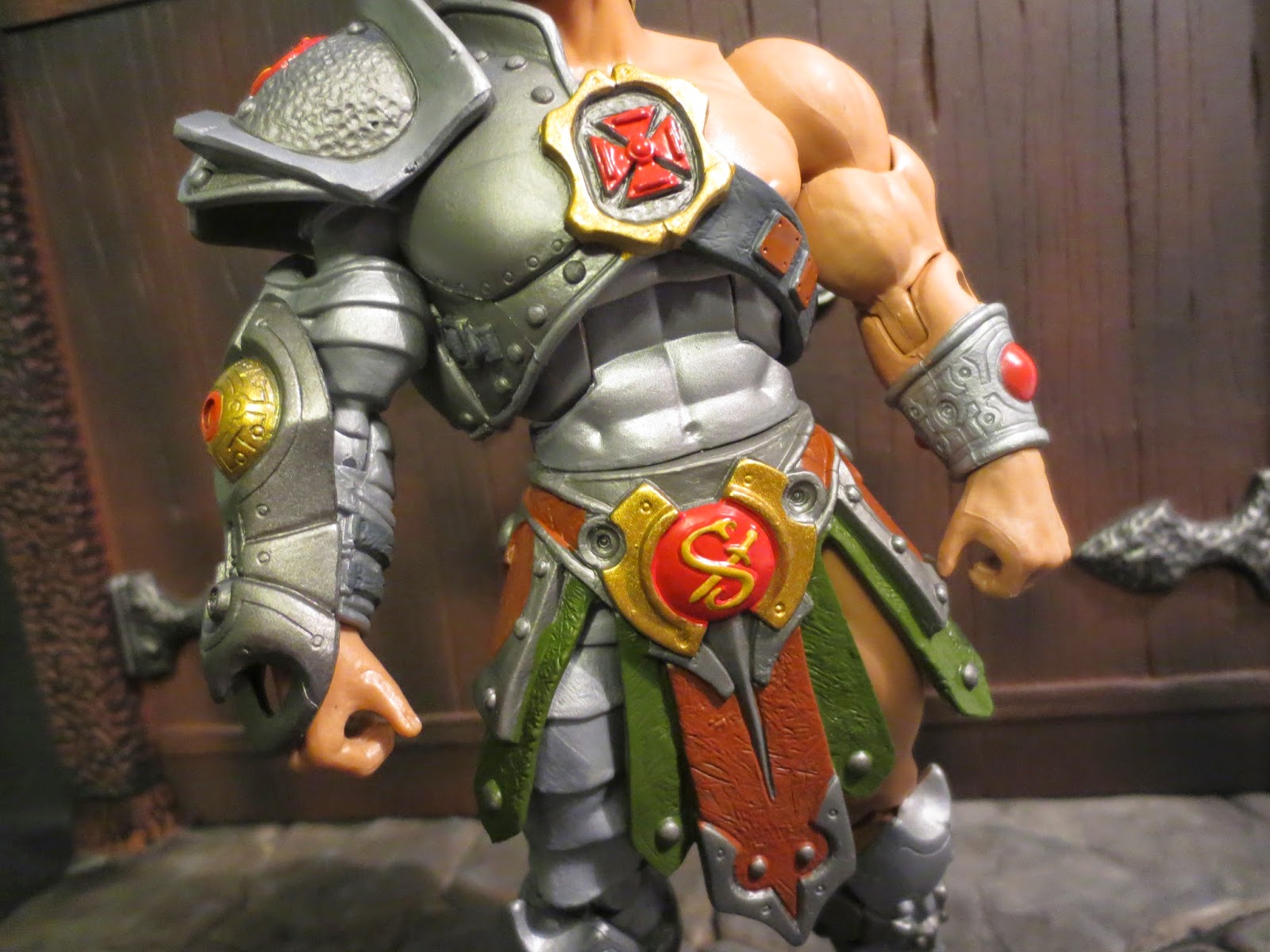 *He-Man's Snake Armor is incredible. I don't want to get all crazy and say this is my favorite MOTUC figure of all time (there are so many figures in this line I love) but I will say that the sculpt is incredibly impressive. There's just so much great visual detail here to soak in. While you might argue that the Snake Armor is impractical (as is most fantasy based armor), it has a cool look that seems to capture the appearance of a Roman gladiator's armor with the intricate detailing of the type of costumes you might see in a role playing video game. The armor is not removable but it is created with multiple separate layered pieces, It's incredibly impressive as it doesn't hinder the articulation and manages to look totally boss. The legs, gauntlets, and belt are all new pieces that just look perfect. 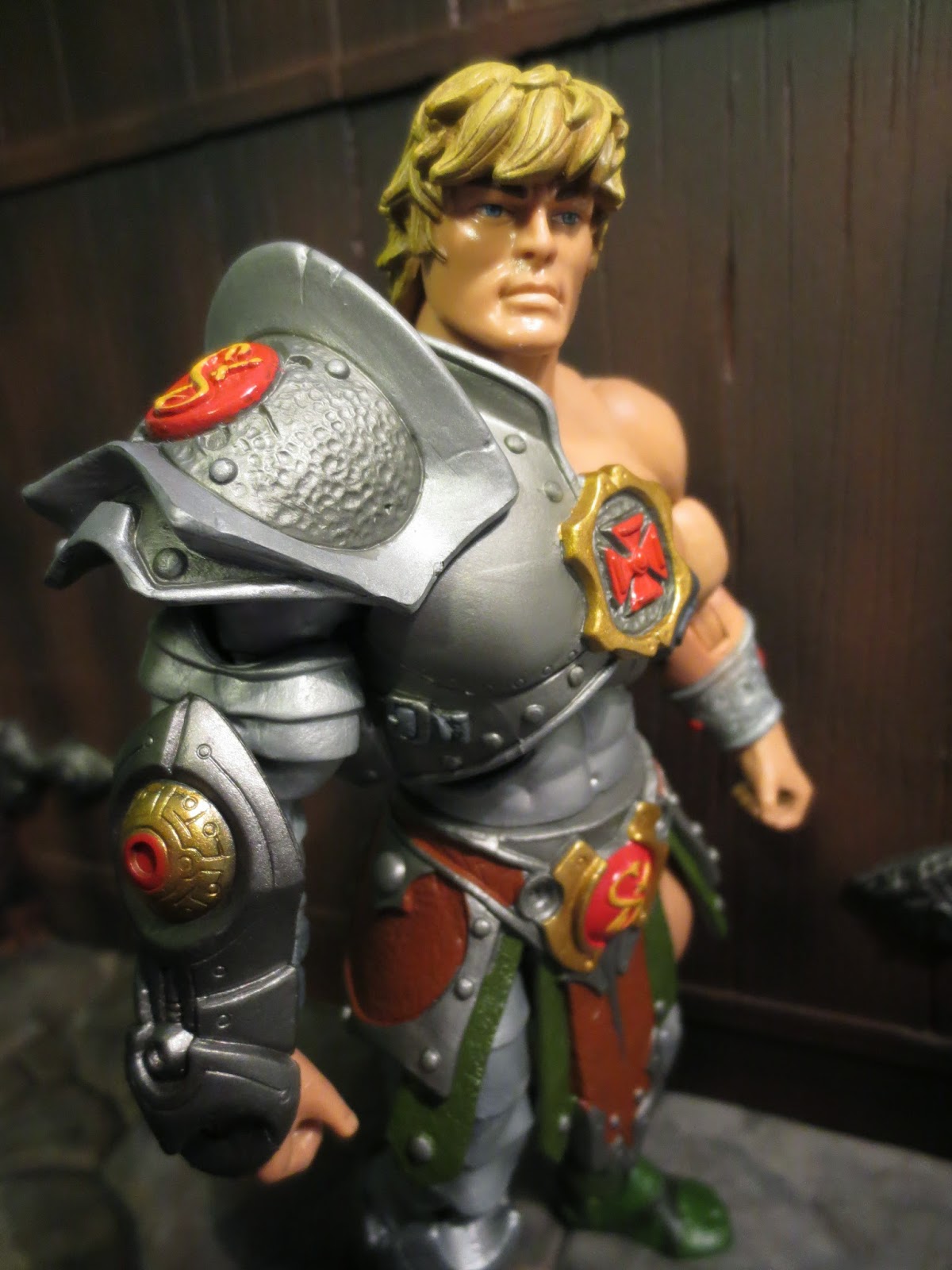 *This might be my favorite He-Man head sculpt in the line yet (although we get a couple of new ones next month when Oo-lar is released. The face is nice and stern with some hair that's still messy and tousled, but it doesn't look intentionally messed up like an anime character. 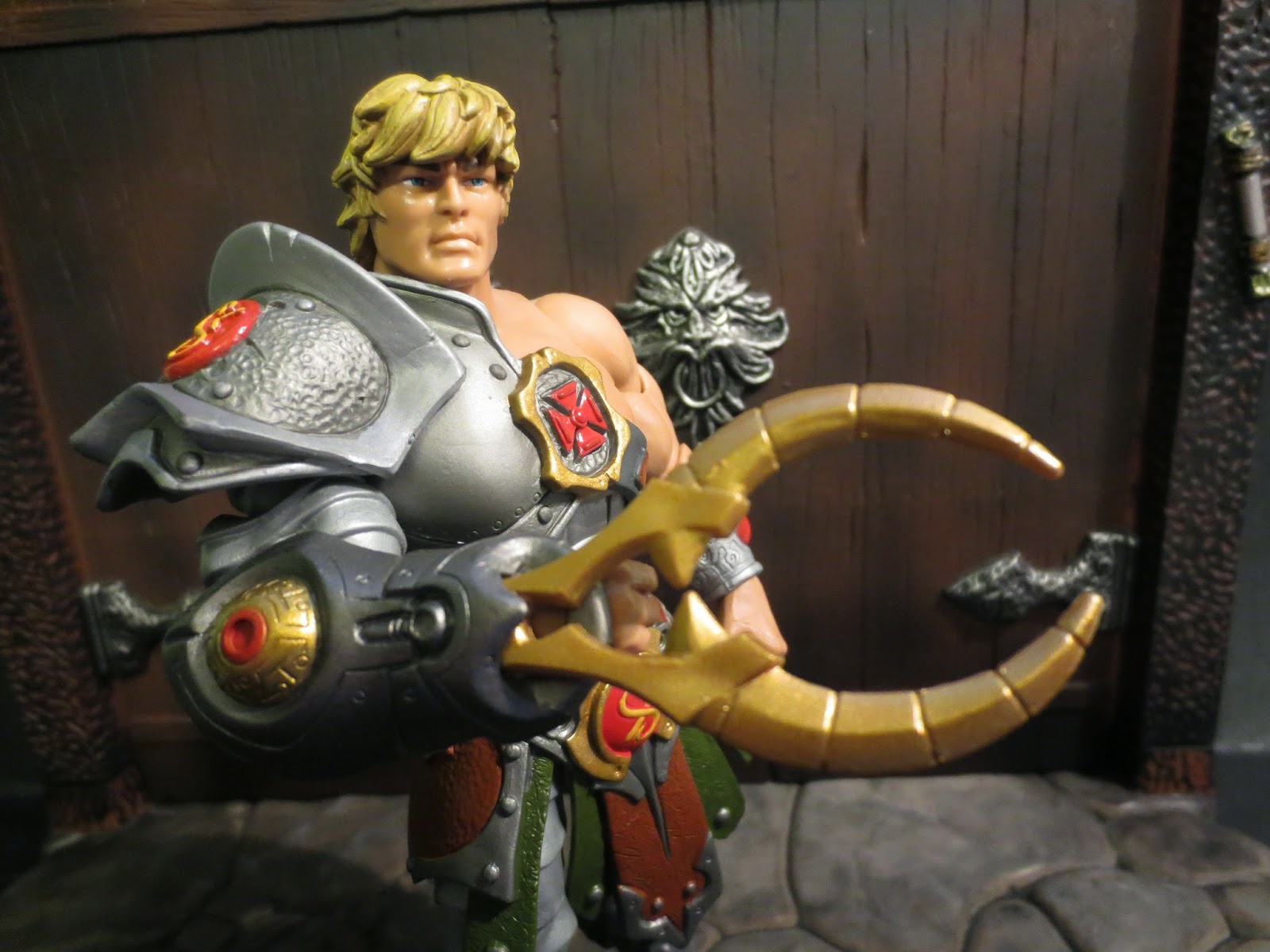 *I'm digging the snake hook, too. Once again: Is this impractical? Who cares? It's a sturdy plastic hook or claw that slips into He-Man's right gauntlet. I love this thing. 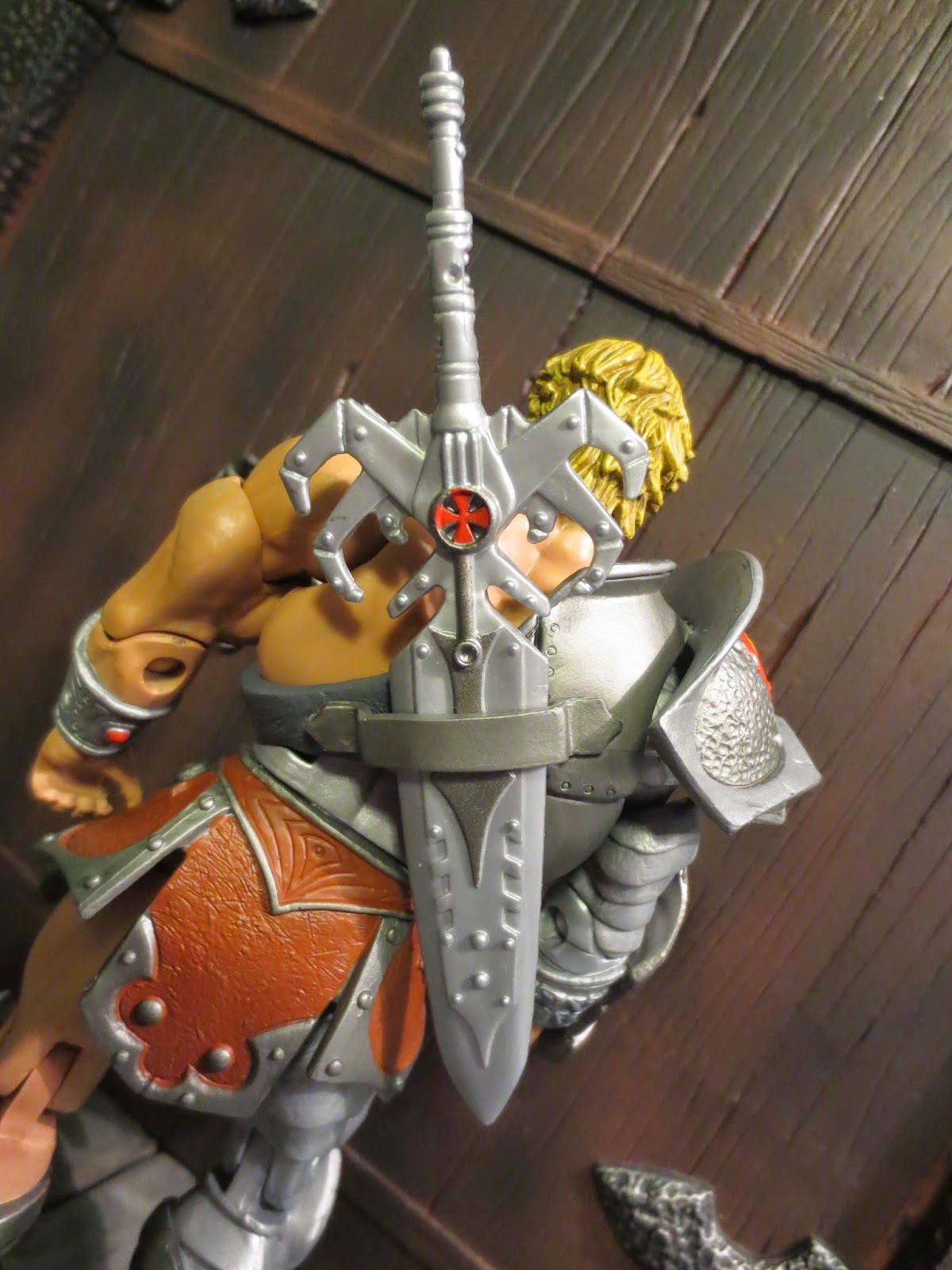 *I'm also happy to see He-Man's 200x Power Sword back. Not everyone's a fan of this sword, but I've always liked the look of it. It goes great with this armor and slips snugly into the strap on the back of He-Man's armor. This is the same Power Sword that came with Man-At-Arms and the Ultimate Battleground Weapons Pak but the paint work is better. There's a darker silver paint app down the middle of the blade and the iron cross is red and black. 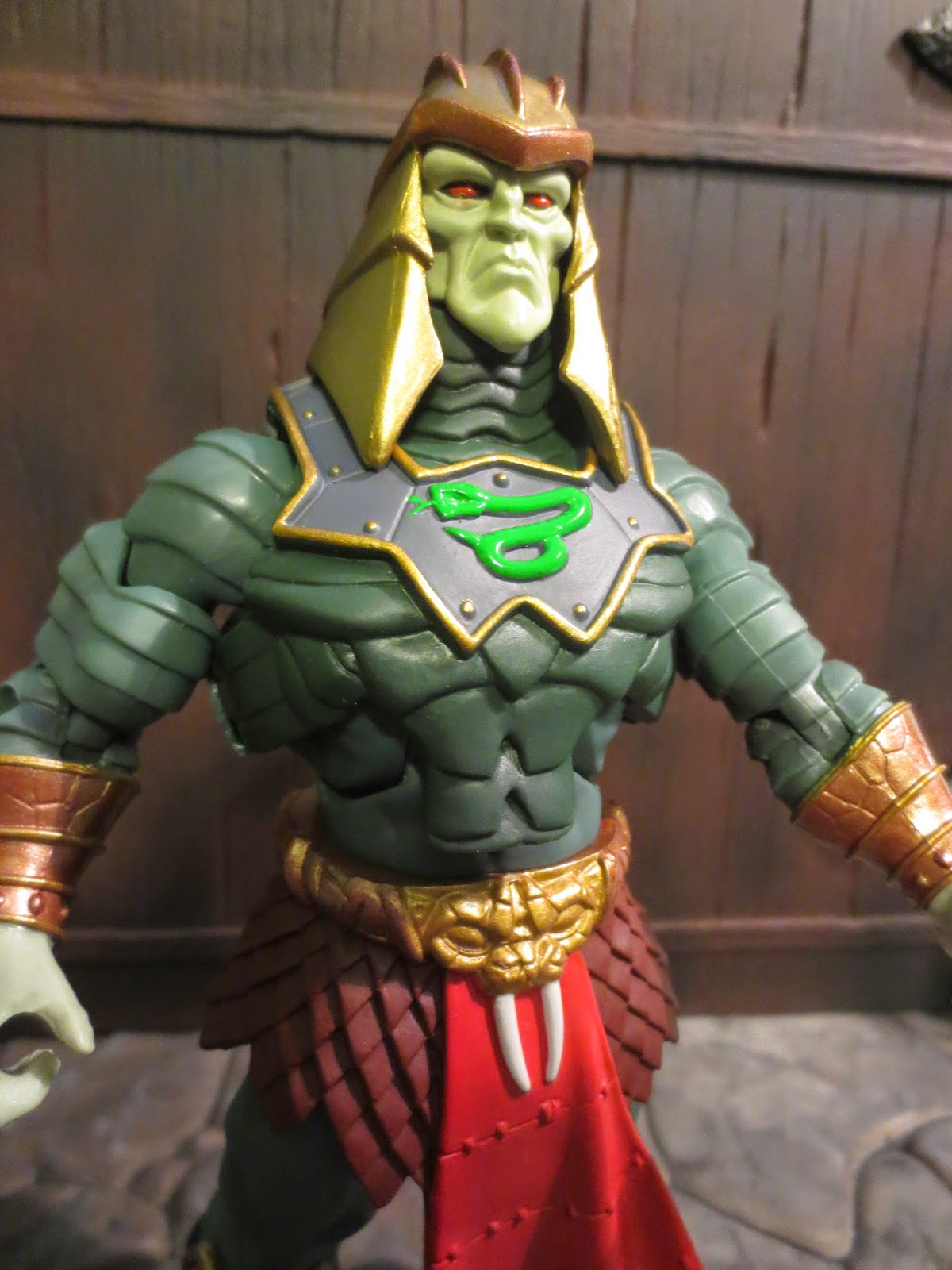 *200x King Hsss has turned out to be a great variant. His headsculpt is incredibly unsettling with a sour look on his face and some excellent paintwork. I love his long face and the red eyes lined with black. 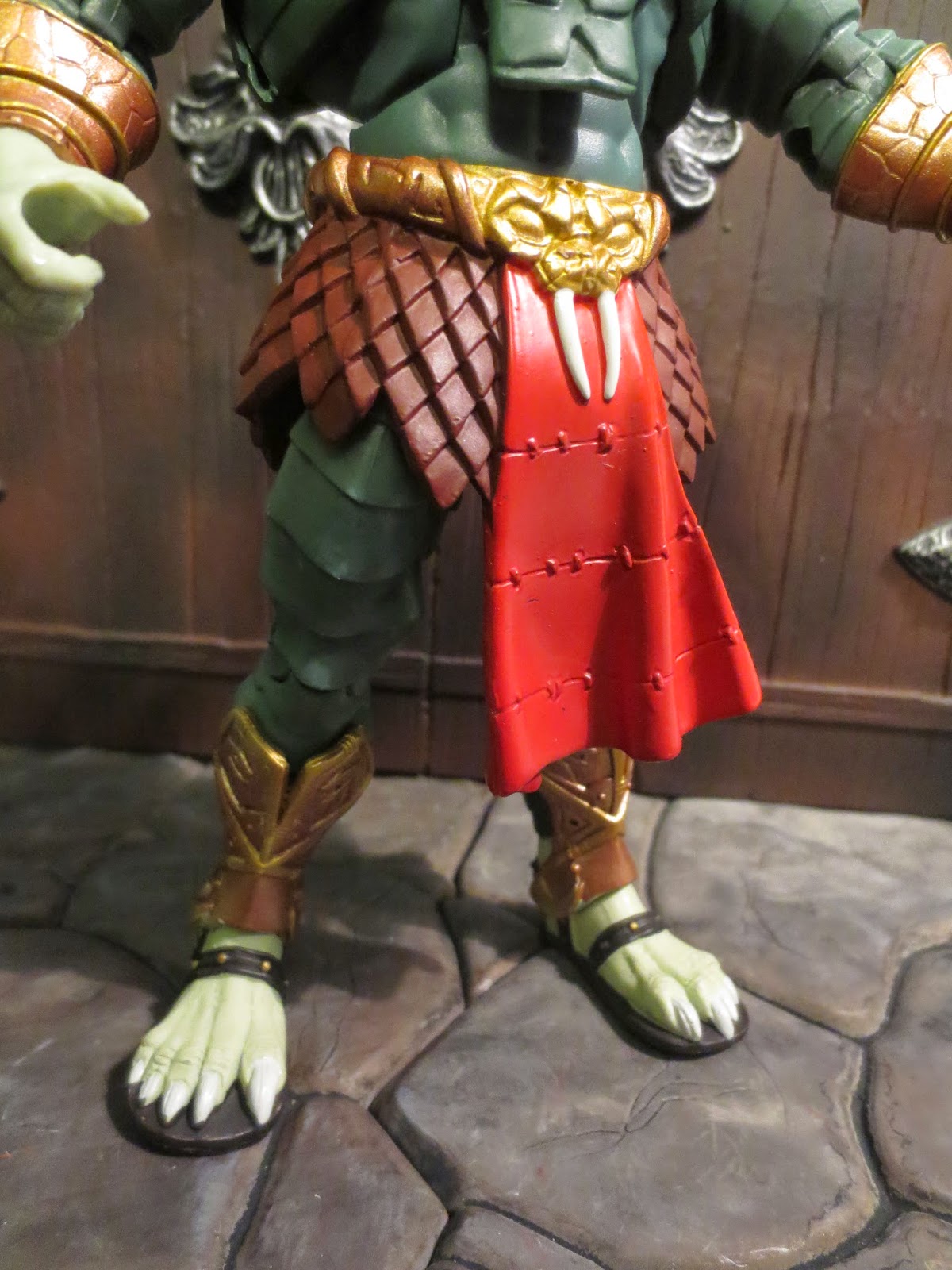 *The snake motif on his armored bits is very, very cool. While there's a snake skin like texture on his gauntlets, his belt looks like a serpent's head (with the loincloth serving as the tongue) and the greaves feature snake head designs. Also, his feet are creepy and nasty. Those are some wicked toenails. 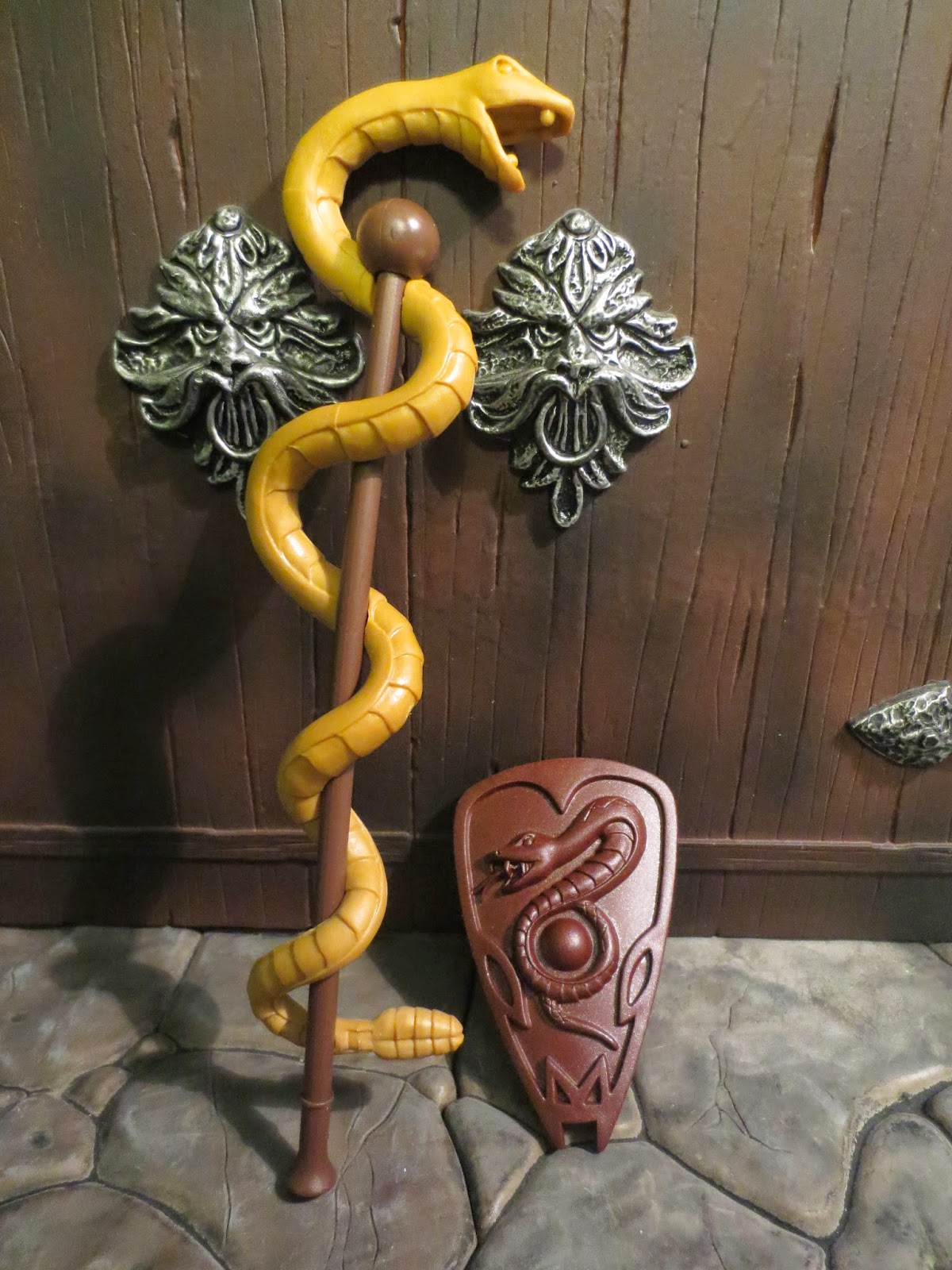 *While they're the same two accessories that were included with King Hsss, the snake staff and shield are nicely repainted to better match the figure. I love the look of the mustard yellow snake around the brown staff.  The snake shield also has a slightly glittery appearance which seems to be due to the plastic. It gives it a metallic appearance. Since these are Hsss' signature accessories their inclusion is welcome. 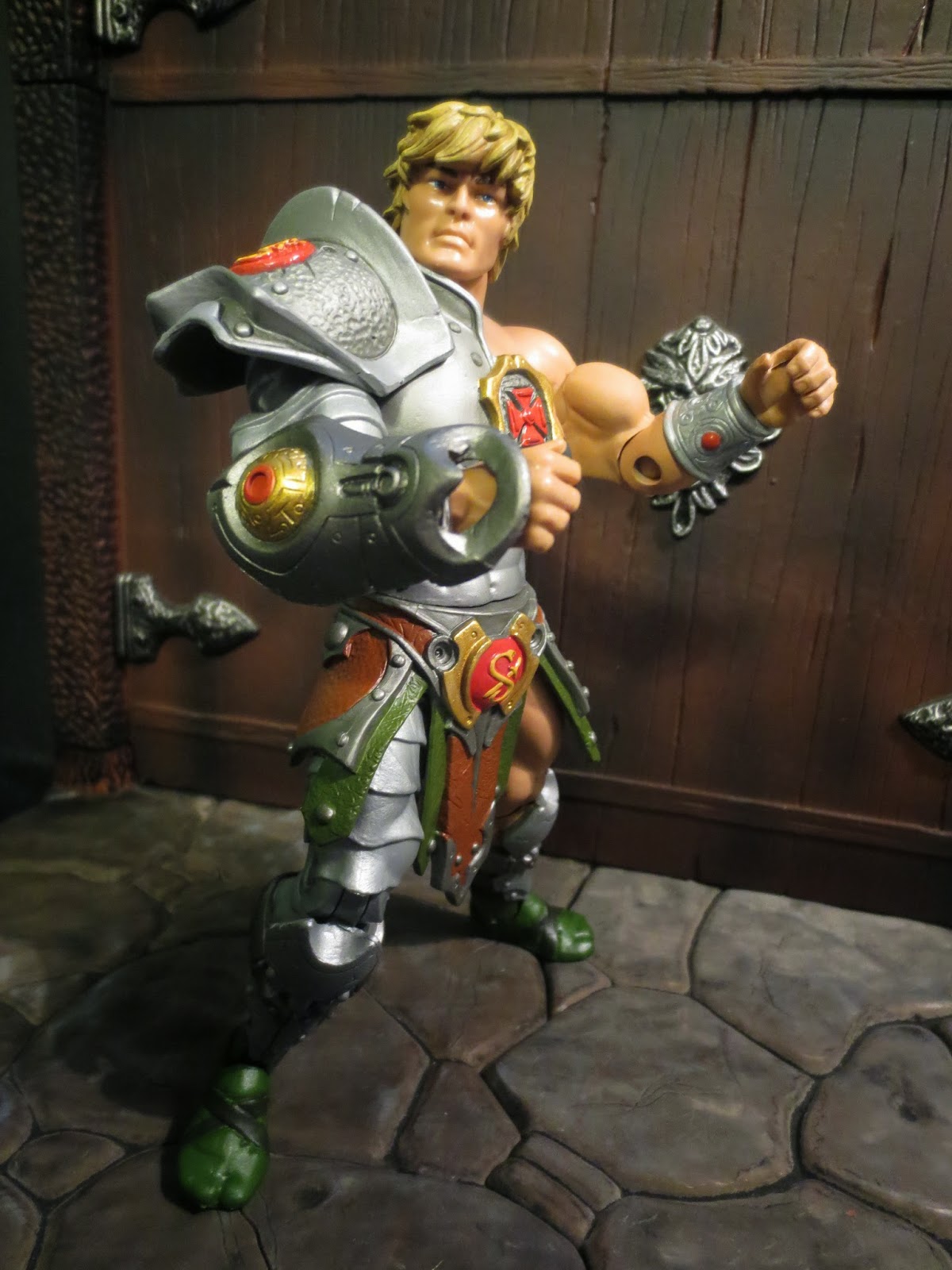 * Since the lower legs are completely new sculpts on He-Man, he doesn't have a boot swivel. Since he's wearing some pretty heavy duty armor, I don't think this is a major issue, but I still feel the need to point it out. I do, however, continue to lament the fact that we're getting very limited ankle rocker joints for lateral movement. He-Man's are very tight and Hsss' don't seem to move at all. I definitely think ankle rockers help add to the overall poseablility of a figure and their inclusion is sorely missed. 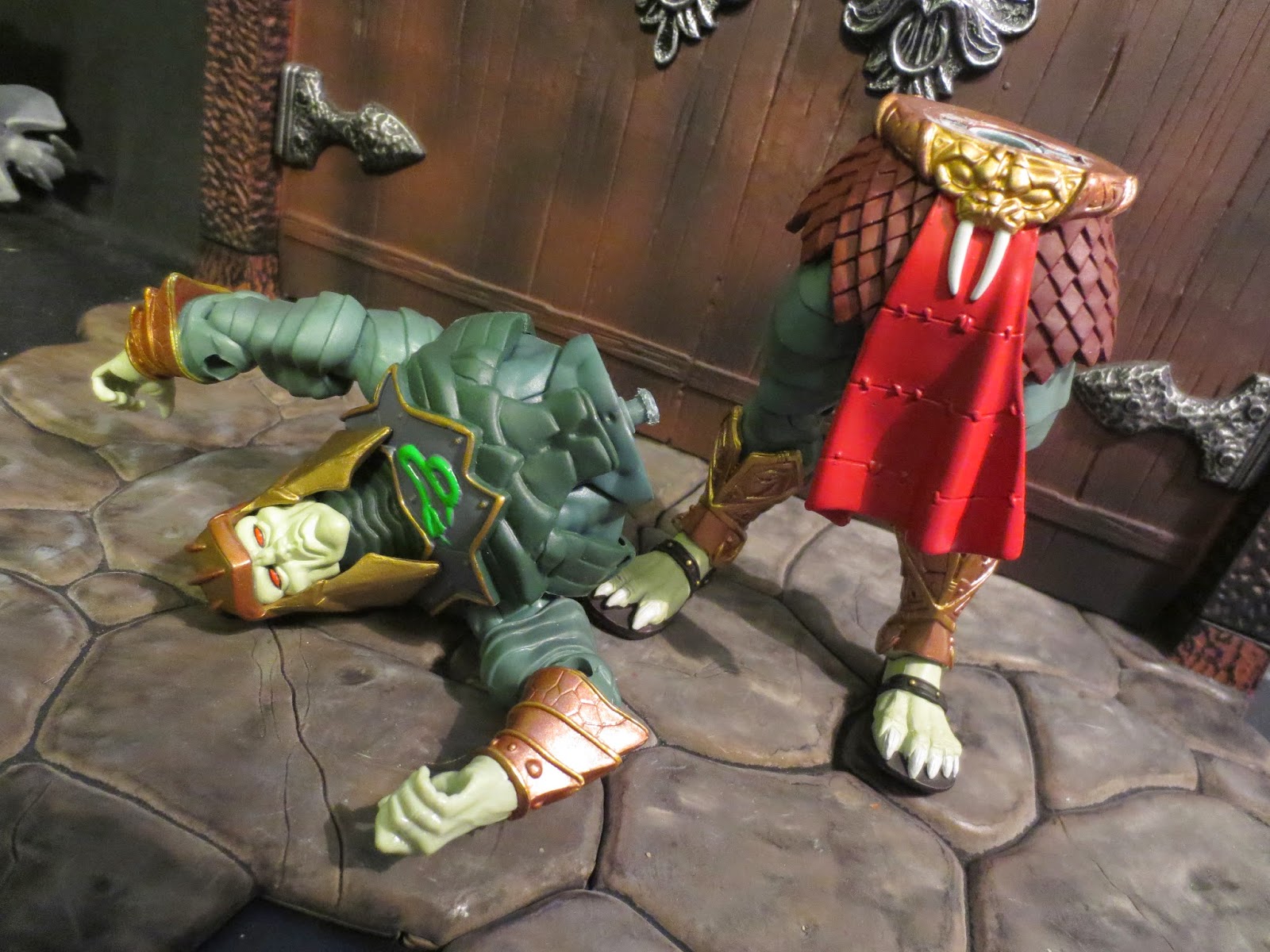 *You're probably wondering: Where is King Hsss' snake torso? Good question. We've see it shown
but instead of including it with this two-pack, Mattel is including it with another figure to be released this year. It's a very desirable item so I guess Mattel is going to use it to lure non-subscribers to pick up a less popular figure, but I can't help but feel it should have just been included in this 2-pack. The nice thing about the oversized slots for the sub is that they give Mattel more flexibility with the (already quite high) price. Maybe this piece didn't cost out after the sub was announced, though. As long as I don't have to buy an extra out of sub item to get that torso, I'll be happy. 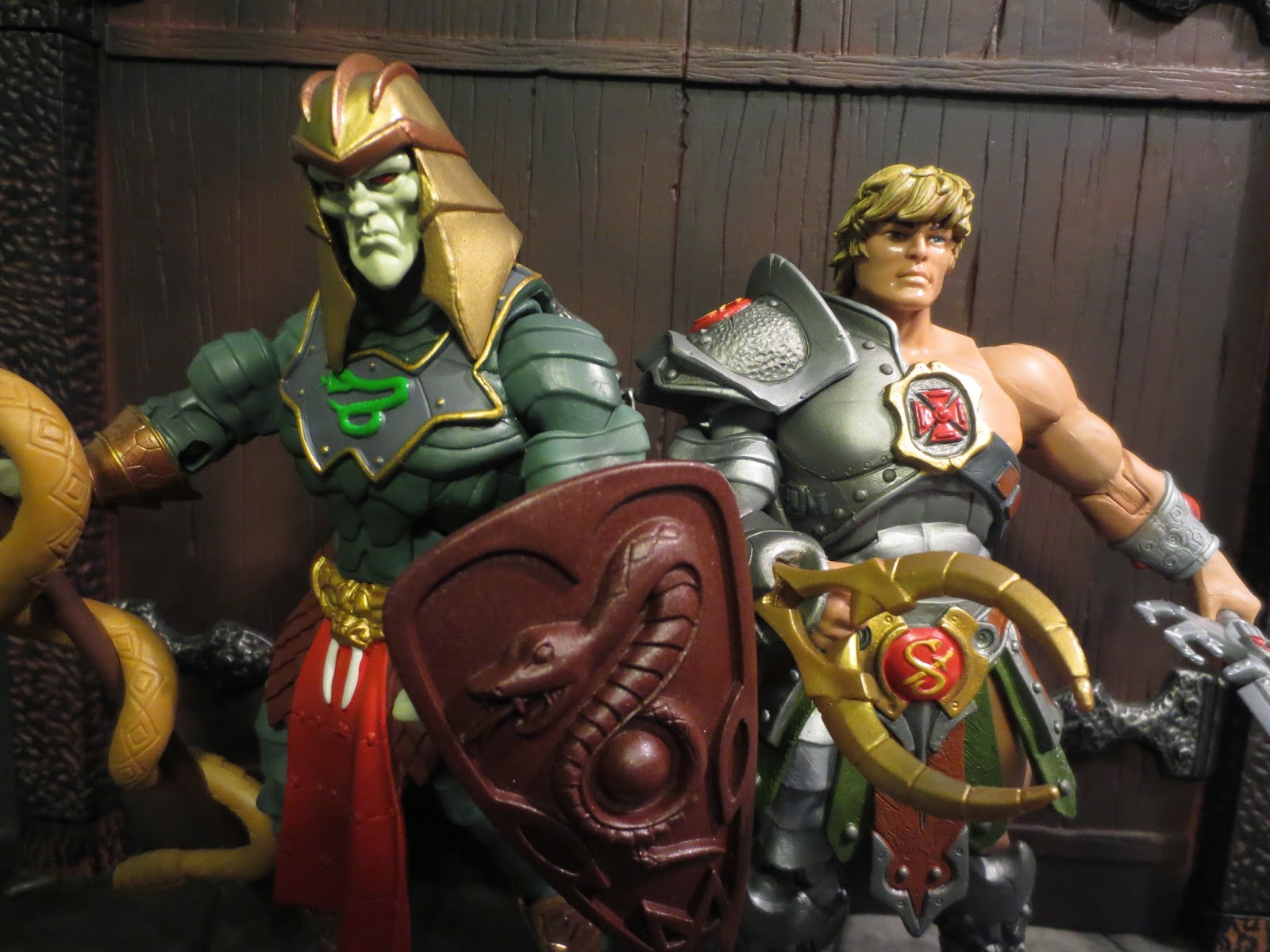 I love this set. It's definitely the best multipack Mattel has released (well, at least ties with the Horde Troopers) and it features some of the best sculpting we've seen from the Four Horsemen in this line (it makes me even more excited for the upcoming Club 200x subscription). Not only do we get two solid variants with amazing sculpting and paintwork, but we're one step closer to fans being able to have "their" He-Man. We've had the MOTUC version for awhile but we're getting the Alcala head and vintage toy heads next month, we've got New Adventures and now 200x, so hopefully we'll get a Filmation head at some point in the future (I'd love a Dolph Lundgren head, but I don't see it happening). Since he's the central character, I like the idea of all fans being able to have their favorite He-Man. We don't need that many variants of other characters in the line, but He-Man is so iconic that it just works out. Anyways, this is a great two pack and one of the best releases in this line. These are impressive, quality figures and I feel like they're truly deserving of an Epic rating. I'm very pleased by this set and I have a feeling most MOTUC fans with any love for the 200x era will, too. 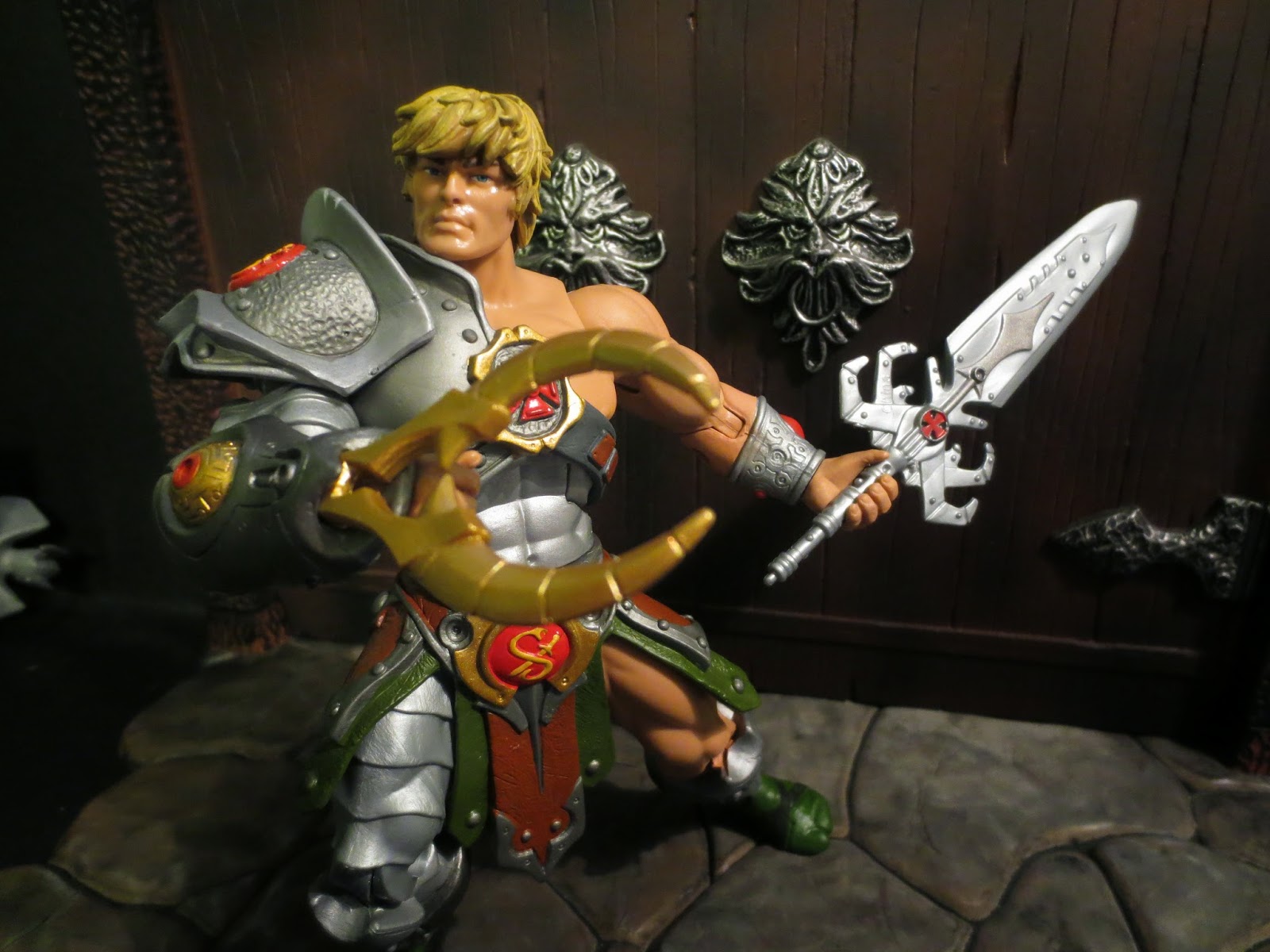 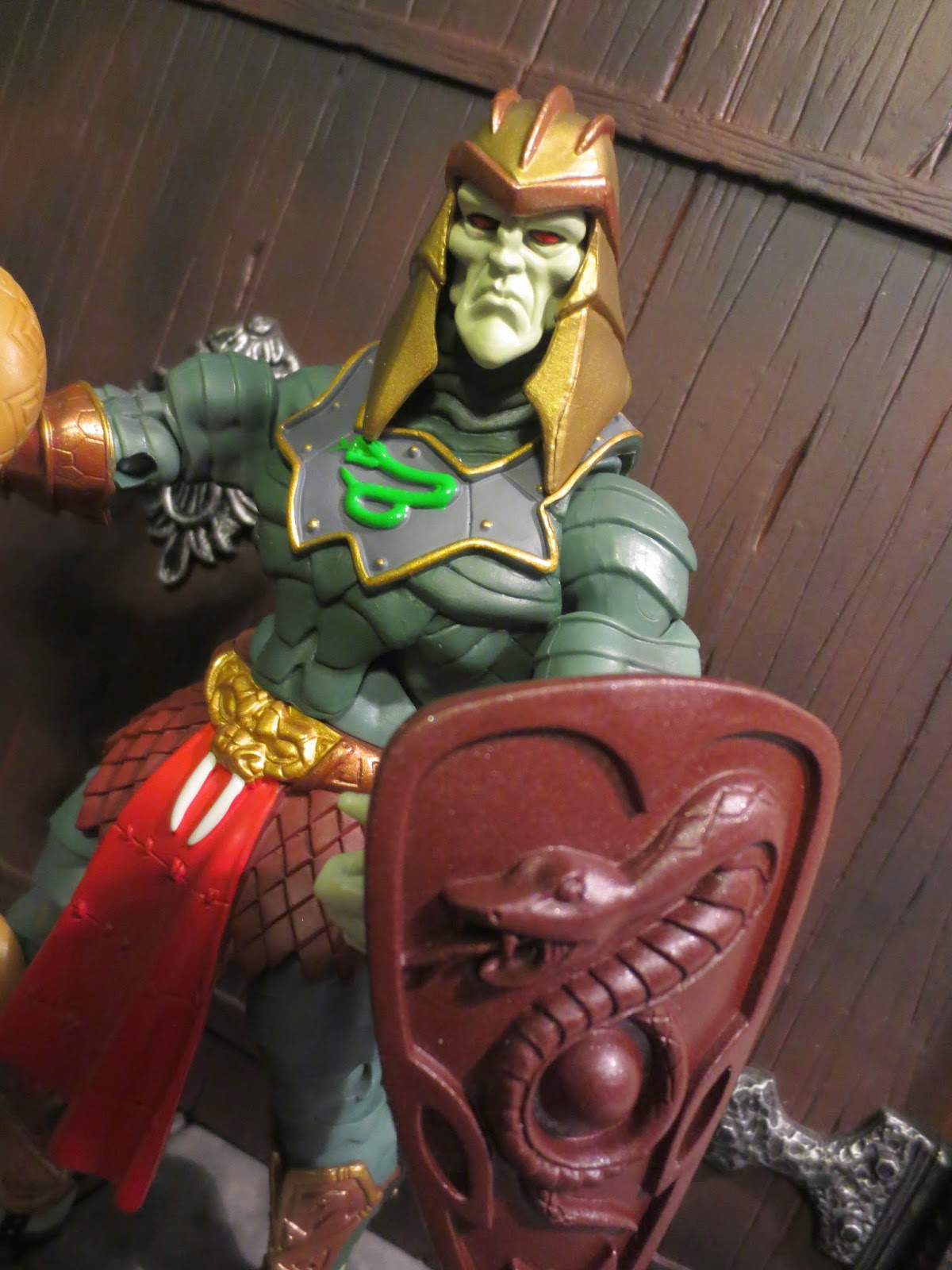