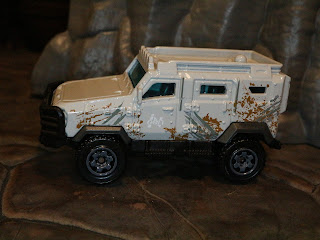 Back at the end of May when I reviewed my first vehicle in the Matchbox Jurassic World series, I don't think I could have imagined that this line would ever be as expansive as it has become. I don't usually collect Hot Wheels or Matchbox cars other than picking up a Batmobile or Ecto-1 every so often but the Jurassic World line has sucked me in (and has become a favorite topic of discussion among myself and a few readers on here). They're inexpensive, they're well made, and they just keep coming, which really feeds the ol' collecting bug, doesn't it? Earlier today I was out at my local Wal-Mart checking the toy aisles when I stumbled across five repaints in this series given the subset moniker of "Battle Damage." There were five individual vehicles ('10 Textron Tiger, '14 Mercedez-Benz G 550, Armored Action Truck, Deep-Dive Submarine, and Gyrosphere) available as well as all five vehicle packaged together as a 5-pack, which you'll recognize is the make-up of the original 5-pack Island Transport Team. Oddly enough, it was actually about .75 cents more expensive to pick up the 5-pack than buying the five vehicles individually. Apparently these are Wal-Mart exclusives, so check their as they seem to have been released to coincide with the release of Jurassic World: Fallen Kingdom on Blu-Ray and DVD. Let's check out the first vehicle available, the '10 Textron Tiger with Battle Damage! More after the break... 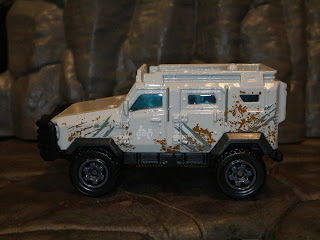 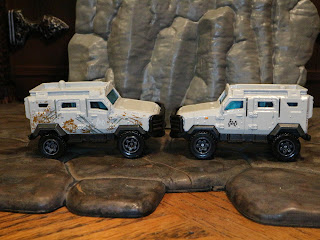 * I've reviewed the original '10 Textron Tiger as part of the Island Transport Team back in June. Here is the original model (on the right) with the repainted Battle Damage version on the left. The differences I spot are the new paint mud and Battle Damage paint applications, the body is a bit more beige, the small orange sidelights are now silver, and the InGen logo is white on the new model instead of black. 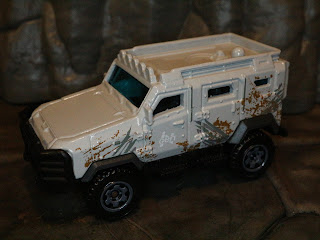 * I do like the Battle Damage paint applications. Jurassic Park toys have always utilized the play feature of battle damage in some way and, even with it just being painted on, it's kind of fun. I like the weathered, worn look here and how Mattel gave us a mixture of "metal" slashes from dinosaur claws and mud splashes. 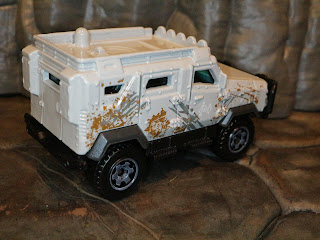 * What I find a little lame, however, is that the front, back, and top are still immaculate on these models. Wouldn't the mud conceivably be on the hood as well? I assume that Mattel supposes that most collectors keep diecast vehicles carded, so the side is the main point of view, but as someone that has these all out on a display I wish the hood at least had some damage and some mud as well. 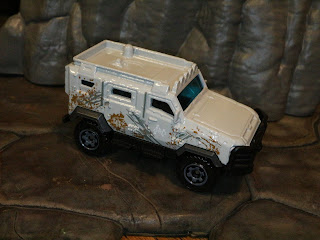 While there isn't much new here, I really do like the paintwork. It's simple, but effective. Too bad it's only on the sides, though. Had Mattel painted the hood too I would have probably given this little vehicle as higher rating than the original. As it stands this is still a Good and a 1/2 vehicle and it makes for a unique entry in this odd collection. I'm still shocked that we're seeing so many of these but they seem to be selling well so I'm all for it. Have you seen these yet? What other variants would you like to see in this line? Let me know!