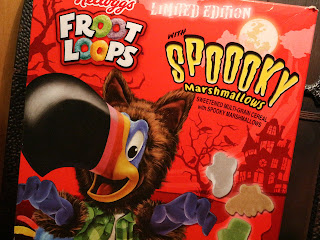 Today I'm checking out some spooky cereal and since it's so creepy I'm not going at it alone! Today I'm joined by my pal and number one assistant Aly Fox! Aly Fox is my 5-year old daughter and this is actually her cereal. A week before school started she took a trip to visit my parents and came back with this box of Froot Loops with Spoooky Marshmallows. Kellogg's has gone all out with this delightfully frightening urban legend of sweetened multigrain cereal haunted by spooky marshmallows. It's perfect for breakfast, snacking, or possibly using in various recipes that call for cereal. Plus, it features Toucan Sam dressed up like a werewolf. I dressed like a werewolf of sorts last year too, so I kind of feel a kinship with Toucan Sam. We also both wear plaid a lot, so there's that too. While I usually buy generic cereals (toys ain't cheap and ya gotta cut where you can) they just don't go all out like the big brands, you know? Let's bite into some spoooky fruit loops after the break... 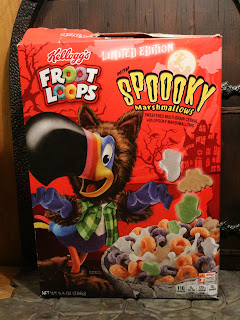 * Here's a look at the box. I like the atmosphere and the presentation. It's still recognizable as Froot Loops but now the nice blood red background features the outlines of dead trees, crows, and a creepy old mansion while the cereal is clearly on display. Here's what Aly Fox has to say about the box:


Aly Fox: I like that the box shows the marshmallows. I like the toucan with the little ears on the top. It makes me feel scary. Not scared. Scary. 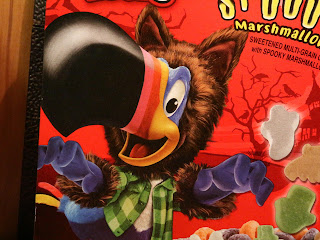 * The biggest deal here to me, though, is that Toucan Sam is fully dressed up in a Halloween costume. I like when the cereal gets spookified but I love when the mascots join in the fun. That just makes it better. Toucan Sam is rocking a pretty solid wolfman costume with a headpiece, furry arms and furry feet, and a plaid shirt. Aly Fox, what do you think about the costume?

Aly Fox: It's so funny. It has funny ears. 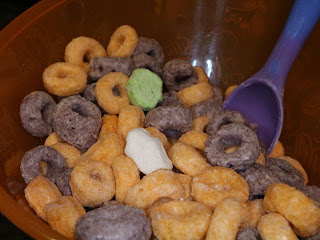 Aly Fox: The marshmallows are a little hard, not crunchy, but they're also squishy. They feel kind of funny. Funny in your mouth. 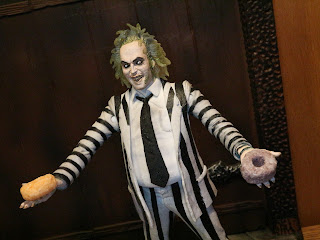 * Here's a picture of Beetlejuice holding a purple Froot Loop and an orange Fruit Loop. I'm assuming they're orange and grape flavored cereal, but Aly Fox has a different take:


Aly Fox: It tastes like normal Fruit Loops except the purple ones are kind of like a plummish while the orange one is kind of an orangish color, yeah? But like a tannish color, too. They kind of taste sweet. They're still sweet and crunchy when they're in the milk, too. 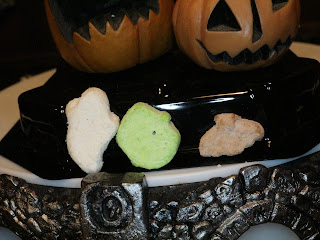 * Now it's time for the titular Spoooky Marshmallows which makes this cereal really standout from regular Froot Loops. The shapes are supposed to be a ghost, a Frankenstein's monster head, and a bat. Aly Fox thinks the green one is something else, though:

Aly Fox: I think they're a ghost, slime, and a bat. The green one looks like slime. They're spooky cause when I make a funny noise like "Boo!" it startles Pap-Pap [my father]. 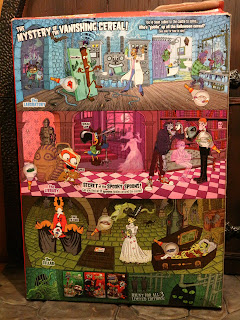 * The cereal is solid. It's just purple and orange Froot Loops with marshmallows but it's still yummy even though the flavor is really nothing new. Honestly, my favorite part of this box is the back. There is an awesome image that shows the Kellogg's cereal mascots hanging out in a haunted house trying to solve a mystery. Well, you solve the mystery of who ate the different bowls of cereal by following clues (the rules are on the side of the box). It's a very busy image with lots to look at, making it fun to stare at while eating your breakfast on a chilly August morn. I asked Aly Fox for her opinion, and I got it:

Aly Fox: It's kind of scary with the eyes lighting up in the dark [referencing the image at the bottom of box of eyes in a doorway]. Any questions? [Yes, she's imitating David S. Pumpkins and yes, she really said that]. 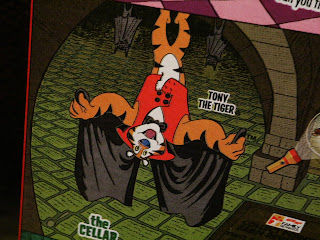 * Let's hear some rapid fire thoughts on the various Kellogg's mascots from Aly Fox. First, her take on Tony the Tiger:

Aly Fox: He looks funny hanging down from the ceiling. 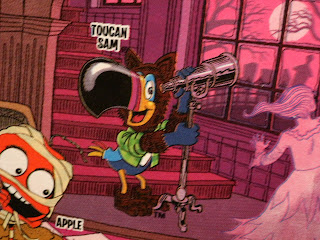 * Next, Toucan Sam as a werewolf and the Apple Jacks Apple:

Aly Fox: That mummy is actually orange and he has a regular color for the bandages [I'm not 100% sure what this means, but I let it stand]. 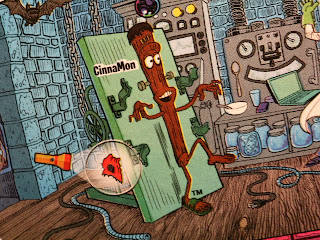 * Last, CinnaMon, the other Apple Jacks mascot, who is apparently a sentient cinnamon stick dressed as Frankenstein.

Aly Fox: He's coming out of the mirror! 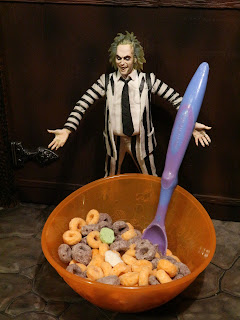 As soon as Aly Fox returned from her vacation with my parents and told me about the "spooky cereal" she had, I knew this review would be coming. She was pretty interested in the idea of helping me with a review of these and I think it turned out well. Froot Loops with Spoooky Marshmallows are pretty good although they really don't offer anything new or unique flavor wise. The box is incredibly impressive, though, and definitely worth checking out. In the absence of Fruit Brute, we have Toucan Sam. Aly Fox, what are your final thoughts about Froot Loops with Spoooky Marshmallows?