Action Figure Review: Evil Seed from Masters of the Universe Classics by Mattel 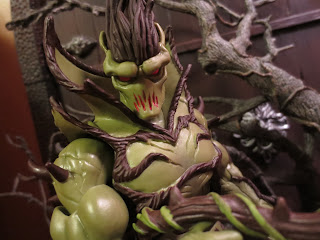 Originally a one off Filmation villian, Evil Seed made a huge comeback as a menacing character in the 200x Mike Young Productions Masters of the Universe series. Evil Seed has long been one of the most requested characters for Masters of the Universe Classics and it's great to finally have him. When the Club 200x sub was revealed at New York Toy Fair earlier this year, Evil Seed was one of the first guys revealed. Heck, he's so popular that the Filmation Evil Seed has already been revealed for the upcoming He-Man and the Masters of the Universe line based more explicitly on the Filmation animated series. Evil Seed is the second figure in the Club 200x sub and was released in August of 2015. Ready for a look at this awesome plant based predator? Then join me after the break... 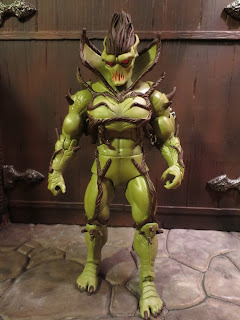 Accessories: Vine creature and the Scepter of Power. 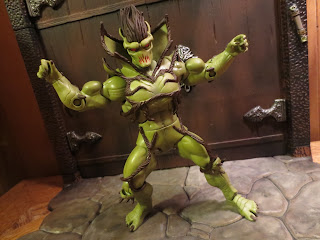 *Yes, while Evil Seed is missing lateral ankle rockers and boot swivels, he's still incredibly poseable and durable. MOTUC are absolutely some of the best toys available on the market and anyone with any imagination at all should have a blast posing him in a variety of evil stances! 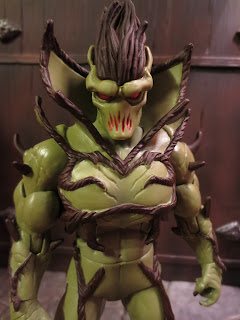 * I love the headsculpt on Evil Seed! It really does a great job of capturing the spirit of the MYP redesign while still making it work in the MOTUC styling. His eerie red eyes, mouth slits that reveal some pulsing power inside, and vine like hair just work together to create an amazing villain. There are also so many new parts on this figure! The shoulder spikes are incredible and the chest piece that features Evil Seed's plant based musculature is just really top shelf work. 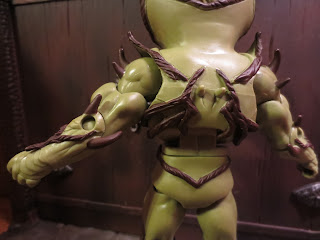 * Here are a few pictures of Evil Seed from the back. I love the look of the vines surrounding him. Mattel and the Four Horsemen have done an incredible job of using some elements from the base bodies mixed with plenty of new pieces and overlays to create a figure that looks incredibly unique. I've seen a few other reviewers mention that the small prongs on Evil Seed's back can be used to hold the creeping vine accessory although I haven't had much luck with that. 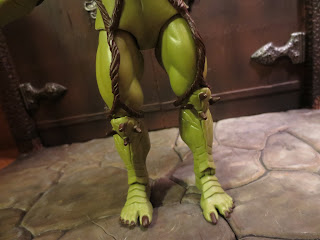 * The vines all over Evil Seed's body really give the figure something extra. I love the vines that run from his waist piece to his knees. They don't hinder the hip articulation much at all and look really, really cool. 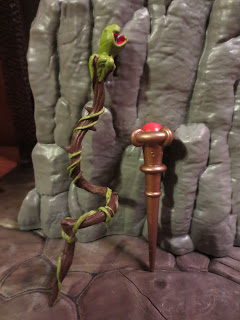 * Evil Seed comes with two great accessories: A creeping vine creature and the Scepter of Power, a Filmation accessory. The creeping vine is my favorite as it has a grear sculpt and ca actually wrap around Evil Seeds arm. It isn't bendable but it is pliable so you can tweak it a bit to make it work in a variety of poses. The Scepter of Power is really an accessory more for Randor but it works just fine for any character who would look good with a mystical magic wand. Give it to Evil Seed, any other hero or villain, or store it in Castle Grayskull. The choice is yours! 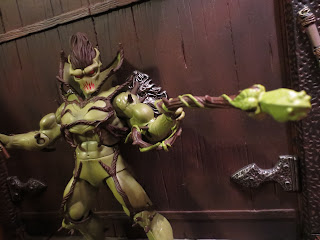 I love Evil Seed! While this has been another good year for MOTUC, so far I think the 200x subscription seems to be the most exciting range of figures. Callix was incredible, Evil Seed is exceptional, and the upcoming figures all seem to be winners, too. There's some excellent sculpting and paint work here and I feel that Evil Seed definitely warrants a Great and a 1/2 rating. He's not as cool as Callix, but he's close. While he's sold out on MattyCollector.com right now, you can probably still find him on the secondary market although it will cost you. He's worth having, though, and really stands out .

I've reviewed a ton of MOTUC figures including: