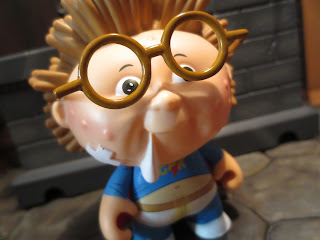 This will be the last Garbage Pail Kids figure I review for awhile. I'll definitely be covering the entire series, though, so keep checking back here at Action Figure Barbecue come October 1st when I start my 31 Days of Toy Terror countdown! That's when I'll cover a few more of the more terrifying, fright inducing, cringe worthy characters in the series. Today, though? Today you get Clark Can't, an example of superhero cosplay gone wrong. Ready for a closer look? Then join me after the break... 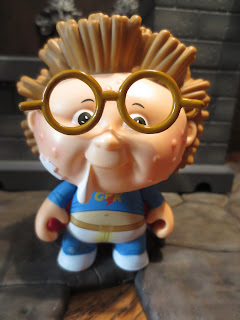 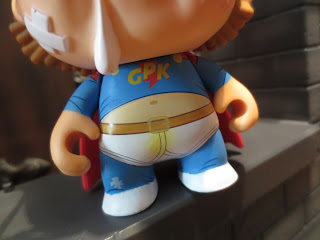 * Clark Can't is decked out in a homemade costume that's reminiscent of Superman. Well, except that it's too small. And there's a GPK logo on the chest. And he's wearing some whitey-tighties over his pants. And there's a pee stain. Gross. Seriously, Quail Man has a cooler costume than this guy. 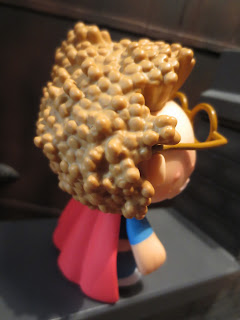 * The hair style on this guy is pretty cool. Imagine if Napoleon Dynamite didn't take very good care of himself: This is what you'd get. He's also decked out in a cape. It helps him to stand since he's a bit off balance due to his massive head of hair. 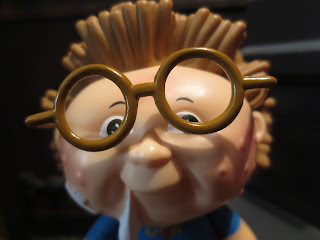 Also, the original trading card showed Clark holding a stack of comic books and standing next to a long box filled with comics. How cool would those have been as little accessories? 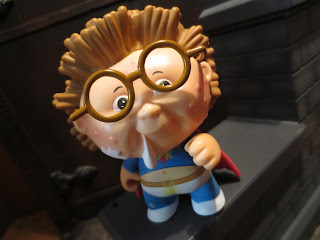 Overall I find Clark Can't kind of dull. He just isn't that exciting. He captures a number of elements of the source material but there's just something off about him that I'm not crazy about. He's a fun figure still and I'm sure he has fans, but overall he's probably my least favorite figure in the set. I'd give him an Eh and a 1/2 overall. He's pretty average and only worth picking up if you're buying a complete set.
Posted by Barbecue17 at 9/10/2015