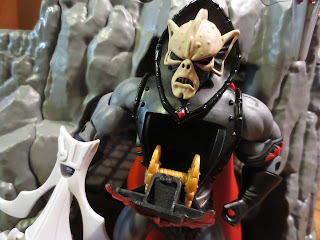 When Masters of the Universe Classics first began in 2008 it was just supposed to be a short line of a few heroes and villains. But it grew. Actually, grew is an understatement. The line exploded and has reached the unprecedented point where vehicles, giant beasts, accessory packs, and enormous playsets are available for a 7 inch scaled toyline! At some point during the years that MOTUC rose in popularity, one of the line's ultimate goals became clear: To release every figure from the vintage toyline. Fans championed it and Mattel seemed to be behind it. As we're growing ever closer to that goal (which will be completed by the end of 2015) today I'm looking at a figure that helps us get one step closer: "Buzz Saw" Hordak (and yes, the packaging uses the quotation marks).  "Buzz Saw" Hordak was a vintage Hordak variant released in 1987 (the sixth year of the line) that was extremely similar to the regular Hordak. Unlike other variants, it was difficult to tell that there was anything different about this fellow at a glance. It was an action feature that differentiated him. I owned both Hordaks as a kid but when it kind of dawned on me that a modern MOTUC "Buzz Saw" Hordak would basically be the same as the original figure from 2009, I kind of did a double take. Was this really a necessary release? It seems that many other collectors felt the same way. Some saw him as a waste, others saw him as a necessary evil, and still others saw him as an improvement. What's my verdict? Read on after the break... 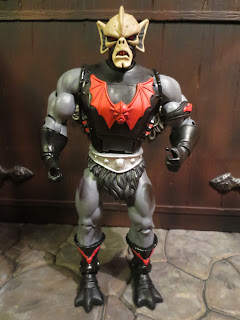 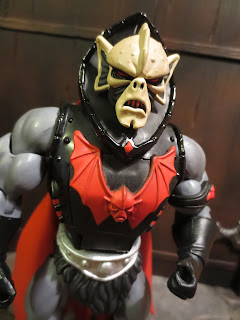 * Other than the newly sculpted torso, "Buzz Saw" Hordak is almost exactly the same as the previous releases. That's not necessarily a bad thing in and of itself as Hordak is still an awesome sculpt.He's one of the most fearsome looking MOTUC figures released in the line and still fits in just as well in 2015 as he did in 2009. If you don't own a Hordak yet and are wanting one, you won't be disappointed in the least. The Horde band on his left arm isn't removable like the previous releases (it's glued on) but that's not a deal breaker for me. 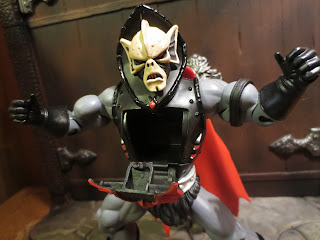 * As has been the case with MOTUC for quite a few years now, the articulation is awesome. It's plentiful, durable, and tight. While Hordak lacks the hinged abdomen that most other male figures have, it's not a huge loss considering he has the chest flap for the titular buzz saw to hide in. 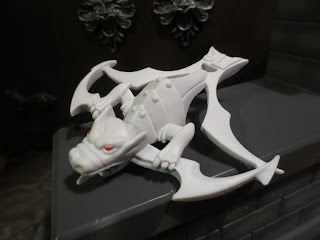 * Including the white crossbow was a nice touch. It's more accurate to the vintage Buzz-Saw Hordak and it gives customers who missed the Spirit of Hordak chase figure a few years back a chance to get this coveted accessory. It's a nice, solid piece and I still love how they Four Horsemen updated the Horde crossbows. They went from being some of the most useless vintage accessories to some of the cooler modern accessories. 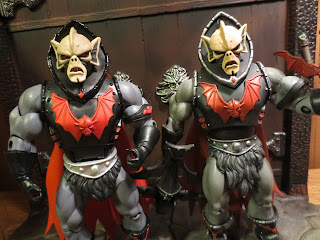 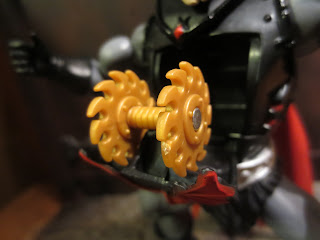 * While I definitely appreciate the opening chest for the buzz saw (why didn't Rio Blast get this treatment?) the Buzz Saw just kind of sets inside. Here I've got it precariously resting against the clip that holds the flap closed but I would have loved for some better way to display the buzz saw. It's the only unique thing this figure has, darn it! It needs a better display! 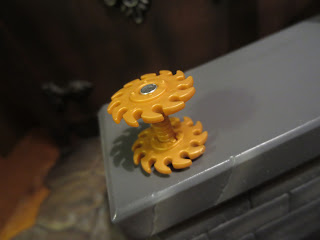 * The included buzz saw is pretty wimpy. It actually looks less menacing to me than the vintage buzz saw. The teeth are better and I like how it can be held in Hordak's hands, but it still seems just a bit wimpy and undersized. 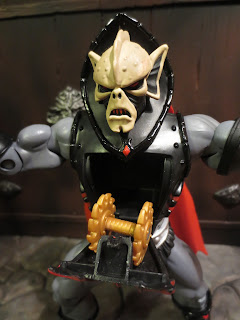 At the end of the day, "Buzz Saw" Hordak is what he is: A vintage based variant that really doesn't look much different than the original. In some ways, Mattel did put some effort into the figure (the fully opening chest was unexpected) but in others, this is a thoughtless repaint (missing the vintage figure's unique belt. Of course, there's also the still bitter sting of knowing this figure was originally intended to come with the upper snake torso of the 200x King Hsss figure which we now have to pay for. While I'm usually not a fan of Mattel including things outside of the subscription (I subscribe because I want everything, not because I want to play games trying to score chase exclusives and such) I do think "Buzz Saw" Hordak was one of the few figures who truly deserved to be outside of the sub. He's just not different enough to really warrant being a monthly or quarterly release. At the end of the day, he's a pretty Eh 1/2 figure and I just can't get excited about him. He's a downgrade in appearance from the first Hordak release and, other than his chest, fails to deliver anything new. This would have been the perfect place for a new Imp figure or a Filmation Hordak head extra. Instead, we get the MOTUC equivalent of Malibu Stacey with a new hat.