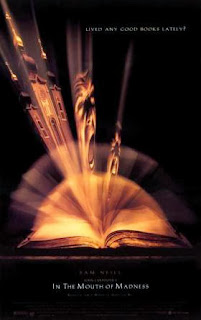 This review was originally written in October 2013 for ThEpic Review.

Sam Neil has been in a great number of movies (including the upcoming Escape Plan) but I will forever be unable to watch any of his roles and not think of him as Dr. Alan Grant in Jurassic Park. His portrayal of that character is just such a huge part of my childhood that anytime I watch a movie starring Sam Neil, I feel as if I'm watching something that takes place either before or after Grant's visit to Isla Nublar. Personally, I would have loved to see Neil play James Bond (he was in the running for the role as a successor to Roger Moore) but obviously that train has now sailed. On that note, let's talk about something relevant to In the Mouth of Madness, such as the movie itself.  Written by Michael De Luca and directed by John Carpenter, In the Mouth of Madness is an incredibly unsettling 1995 horror film that strongly utilizes the mystique and ideas of the works of horror scribe H.P. Lovecraft to tell the tale of an author who literally drives his readers mad. While many fictional works reference the writings of Lovecraft through various name drops, few of them actually feel as if they're doing so on any more than a surface level. In the Mouth of Madness does a fantastic job of drawing inspiration from Lovecraft's work in a way that strives to channel the true depth of the author's mad genius, resulting in a film with a proliferance of disturbing images and even more disturbing musings on topics such as sanity and the nature of reality. Ready for a leap into madness? Then join me after the break....


Horror novelist Sutter Cane (Jurgen Prochnow) is the most widely read author in the world. With a rabid fanbase eager to consume his works Cane is the darling cash cow of Arcane Publishing, a publishing company who has quite a large insurance policy on Cane. When Cane disappears,however, chaos ensues as his latest book is delayed causing readers violently riot outside of book stores (seriously, even the Twilight crowd isn't this bad). Believing the disappearance to be either fraud or a publicity stunt, the head of the insurance company asks private fraud investigator John Trent (Sam Neil) to investigate. When Trent meets with the director of Arcane Publishing, Jackson Harglow (Charlton Heston), he is assured that the author's disappearance is no joke and that the company either wants the author found or his latest manuscript, In the Mouth of Madness, in their hands for publishing. Initially dismissive of the horror author and his readers, Trent begins reading Cane's work looking for clues and soon begins to discover that Cane's writing has a frightening and insidious quality that begins to ingrain itself in his mind. After a serious of disturbing nightmares and visions, Trent discovers a clue that leads him to search for Cane in Hobb's End, a small town in the middle of New Hampshire that serves as the setting for his stories. What Trent soon discovers is that Hobb's End may not just be the basis for Sutter Cane's nightmares, but the source of them.

For fans of the macabre, there is a lot to love about this movie. Whether you dig creepy obsidian churches, axe wielding maniacs, ancient and unknown races of monsters, the ramblings of the insane, or simply demonic children, In the Mouth of Madness has got you covered. There's a variety and an unexpectedness to the disturbing imagery in the film that just works amazingly well to put you in the mood for a good scare. The film is ultimately about the nature of reality and insanity and the fine line that runs between them, so be prepared for plenty of scenes that strive to depict insanity: moving portraits, bizarrely sinister characters, and jarring images of violence all work in unison to portray the crumbling of reality. One particularly effective scene depicts someone traveling along a dark country road at night as they begin to notice everything, including the lines on the road, disappearing. It's a chilling image and one that still comes to my mind when driving alone at night.

The movie moves along at an good pace, very much like a mystery film, and Sam Neil brings a perfect blend of seriousness and humor to the film, both of which factor in as we watch Trent slowly lose his grip on reality. In the Mouth of Madness is the third film in Carpenter's "Apocalypse Trilogy" and, along with The Thing and Prince of Darkness, presents a bleak outlook for humanity. There are plenty of in-jokes about both Lovecraft lore and horror literature in general as well as the beginnings of some fascinating ideas about the way that the written word can effect readers (the way films effect viewers is explored in Carpenter's more recent film Cigarette Burns). Like many of Carpenter's works, In the Mouth of Madness has really taken on a second life in recent years as it has become somewhat of a cult classic. If you're a fan of Lovecraft, horror literature, or films that depict events being written into reality, give it a watch.