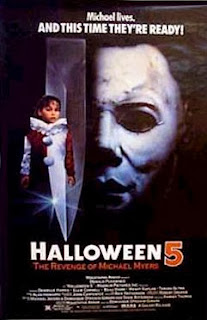 This review originally appeared on ThEpic Review in September of 2013.

Like the connection between the original Halloween and Halloween II, Halloween 5: The Revenge of Michael Myers picks up right where Halloween 4: The Return of Michael Myers ends (although it soon jumos ahead one year to the next Halloween) to continue the story with most of the same characters. Released in 1989, Halloween 5 is an incredibly disappointing sequel. Where Halloween 4 left us with one of the most shocking scenes in the entire franchise where a seemingly dead Michael Myers has seemingly transferred his evil powers to his niece, Jamie Lloyd (Danielle Harris), Halloween 5 leaves us with the cinematic equivalent of a smashed pumpkin: it starts off with some promise, but quickly is dashed apart into a real mess. It's lacks the suspense of any of the previous films, dwells far too long on things of no interest, and really doesn't seem to have any real plot. It also has an ending that's completely unsatifying. There are films that end on a cliffhanger or a shocking scene and there are films that end with no resolution. Halloween 5 falls squarely into the latter category. Want to hear more reasons why it's so bad, along with a brief summary of a few decent elements? (Even a smashed pumpkin has seeds that you can toast and enjoy!) Then join me after the break...

While the last movie left us with a pretty creepy plot development of Michael's curse and powers seemingly being transferred to Jamie (who stabs her mother with a pair of scissors in an eerie recreation of the murder of Judith Myers), here Jamie's in a children's clinic in Haddonfield and simply begins having visions of what the newly resuscitated Michael is doing. Is Michael trying to kill Jamie? Well, maybe, but he doesn't really seem to be too focused on that for most of the film. Instead, he just seems to be going around killing random teenagers in a part of town completely oppoiste from where Jamie's staying. I think the biggest problem with this movie is that I have no clue what is supposed to be happening. Michael Myers, like most good movie slashers, is typically a pretty focused guy. He doesn't need a complex plan; he's simply motivated and unwaivering. Here he seems like he's just happy carving up random teens. He spends most of the movie chasing Tina (Wendy Kaplan), a friend of Jamie's adoptive sister Rachel (Ellie Cornell), someone who seems to have no ties to Michael Myers at all.  It isn't until Jamie tracks him down herself and Dr. Loomis (Donald Pleasance) coaxes him into a trap that Michael seems to be doing anything with a focus. Loomis has definitely gone off the deep end in this movie, though, and probably should be forced into retirement. He shakes little kids while yelling at them, points his gun at random people, and uses Jamie as bait to catch Michael.
The movie suffers from a lack of likable characters with any type of motivation. Pleasance's Loomis is typically the high point of the Halloween films and here he's still dedicated to tracking down Michael, but he's completely unbalanced and we're given no hint as to what exactly Loomis is trying to do. He rants about Jamie being able to assuage Michael's rage, but nothing ever comes of it. Kaplan's Tina really becomes the main character in the film, and I'm not sure how to feel about her. She's equal parts attractive, funny, and obnoxious, so you're always caught off balance by her, but not in a good way. There's also a subplot with a mysterious man in black that seems like it's going to pay off in someway, perhaps by explaining Michael's supernatural source of power that's tied to Halloween, but it never goes anywhere. I really feel that director Dominique Othenin-Girard either just didn't understand the Halloween series or was too pressed for time (as this movie was released less than a year after Halloween 4) as the film just isn't up to the quality of the previous installments. It often just gets flat out boring, especially in the middle of the movie where nearly everything just drags. It also has the most boring intro of all the first five films. Usually a Halloween intro starts playing that familiar John Carpenter tune alongside images that really get your blood pumping like pumpkins and old Halloween decorations. This one is just uninspired.
Is there anything good about the movie? Yeah, there are a few decent things. There's a good scene where Michael Myers stalks Rachel through her house, a stupid but funny scene where Michael impersonates Tina's boyfriend by wearing a rubber mask and picks her up in her boyfriend's car, and a creepy scene at the end of the movie where Dr. Loomis tries to recreate the Judith Myer's murder in Michael's childhood home. Still, unless you're planing on watching through all of the Halloween films, just skip this one. It just doesn't live up anything that comes before it and really misses the Halloween vibe that permeates the first four films.