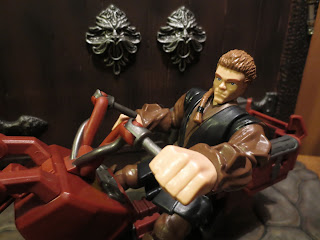 Today I'm looking at another set from the Star Wars Hero Mashers line: The Jedi Speeder & Anakin Skywalker two-pack. While this is without a doubt Anakin Skywalker from Episode II, this is not a Jedi speeder. It's a simple old swoop bike. More accurately, it's a Zephyr-G swoop bike and it belongs to Owen Lars. Yeah, this is the swoop bike that Anakin borrowed when he went to resuce his mother on Tatooine and slaughter Tusken Raiders. While many of you have probably tried to repress your memories of Hayden Christensen's performance in Episode II, this figure does capture one of the better scenes he had in that movie. Ready for a closer look at Anakin and his swoop bike? Then join me after the break! 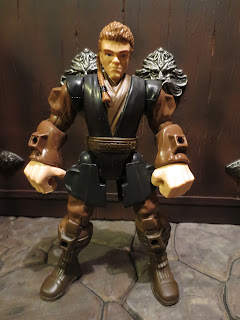 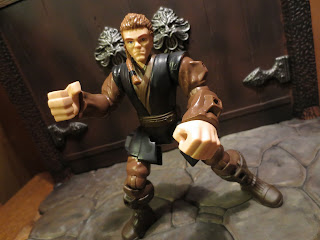 * I'm going to be reviewing quite a few of these Mashers over the next week or two, so I'll probably drop this comment eventually but I do really like the articulation on these other than the lack of a swivel/hinge shoulders joint. They're durable and quite fun to play with. 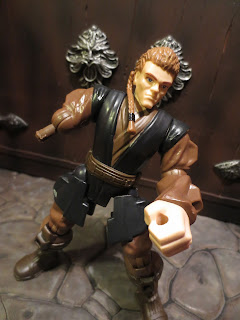 * The mashing concept is quite fun. While Anakin is the only figure in this set, you can mash him with the other Star Wars Hero Mashers. Want Anakin to wear Stormtrooper armor? OK. Want Luke to wear some darker themed Jedi clothes? Go for it. Want to make a Gungan Jedi? It's all up to you, baby! Of course, you can also just detach Anakin's right arm and pretend he just got his rear end handed to him by Count Dooku. 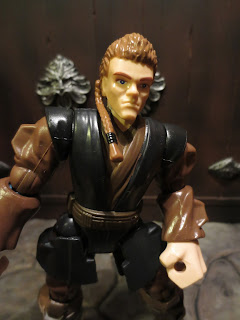 * Yup! That's Anakin! There is a single carded Anakin figure available but that is more of a Clone Wars/ Episode III Anakin. This guy still has his right hand and has the bizarre padawan hair cut. I never really liked that design decision. Still, it's here (although it's definitely exaggerated a bit). 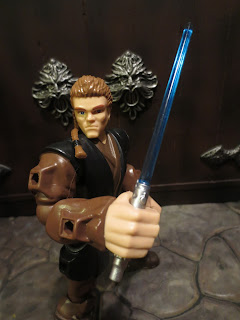 * Of course Anakin comes with his lightsaber. It's a simple piece and is much firmer than many of the other accessories in the line. It fits easily in his open gripped right hand or in the left hand which is much narrower. 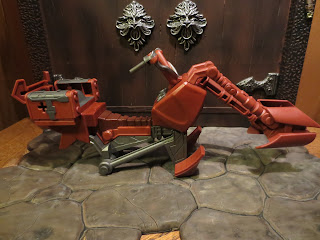 * And here's the Zephyr-G swoop bike, er... I mean Jedi speeder. It's actually a really nicely sculpted vehicle and has a mixture of colors that really help it to stand out. I love the red and gray on this thing. And, if anyone is wondering, it does look fairly decent with Star Wars: The Black Series figures. 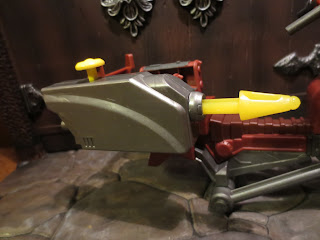 * The cannon is definitely a BFG type of accessory, but it's still kind of fun. You can't tell me that if Anakin had had access to a giant cannon he wouldn't have used it to drive around and blow up more herds of Tusken Raiders. That guy would have gone nuts with this thing! It launches the missile with a fair bit of power so watch your eyes! 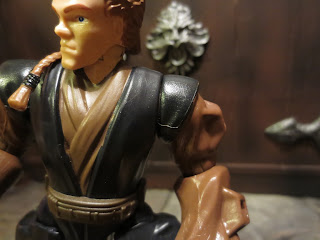 
* I still wish these guys had swivel/hinge shoulders and not just swivels. That would radically improve the range of motion! 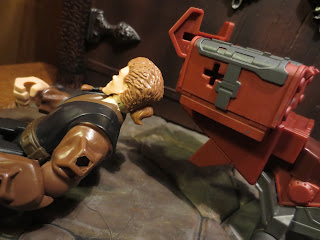 * This is an odd complaint, but one that I believe has merit: Why does the cannon that attaches to Anakin's swoop bike not have a round peg so that it can also attach to the figures? It uses it's own cross shaped peg and hole. It works fine, but wouldn't it be cool if you could attach the cannon to the figures and the various accessories to the bike? 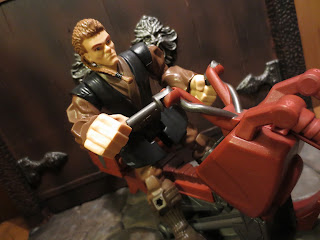 * One thing that is a bit odd and frustrating with the set is that Anakin really cannot sit properly on the swoop bike. Due to not having swivel/hinge shoulders you really can't properly get his arms in a decent riding position for holding the handles nor do his legs and feet properly straddle the bike. Probably not a deal breaker for the kiddies but collectors will notice. 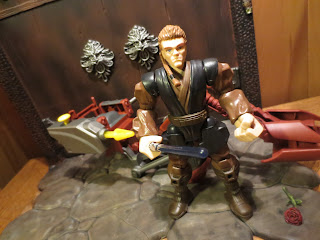 Anakin and the swoop bike aren't bad figures at all, but they're just not as exciting as some of the other figures released for some reason. The swoop bike is quite nice and Anakin is well sculpted and durable. It's a Good set and worth checking out if you can't get enough of this line. Now Hasbro just needs to release a Tusken Raider masher so Anakin can dismember it! Also, let's hope that Hasbro finally does away with their "girls don't sell" thing and releases some female figures in this line. Anakin needs a Padme to share corny lines with.

I guess you could say I've reviewed one other Anakin Skywalker figure since I reviewed The Black Series 6 inch Darth Vader.

I've reviewed plenty of Star Wars figures on this site, including:
Star Wars by Kenner
My First Star Wars Figures