Action Figure Review: Mara of Primus from Masters of the Universe Classics by Mattel 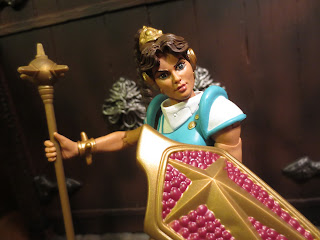 Today I'm checking out the August 2015 Club Eternia action figure from Masters of the Universe Classics: Mara of Primus! Mara is the first Galactic Guardian in MOTUC since last year's Galactic Protector She-Ra and nicely adds another hero to that faction's roster. While Mara was a prominent character in The New Adventures of He-Man she didn't actually get a figure in the vintage toyline. There was a prototype created but she was never released. That's finally changing, however, as Mara enters the MOTUC collection. Ready for a closer look at Mara? Then join me after the break... 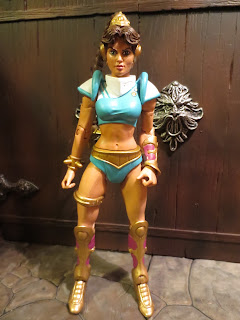 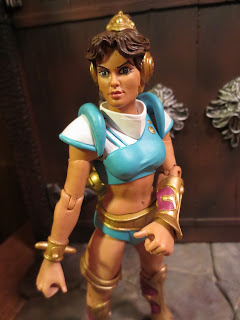 *One of the interesting things in this line that no one can deny is that over the past few years we have been seeing more and more unique sculpts. Mara has lots of new parts and she looks great because of it! Her MOTUC outfit is a blend between her appearance in the cartoon series and the prototype figure and it creates a great look that mixes the sci-fi fantasy or New Adventures with a more warrior-like appearance. There really is plenty of great visual detail all over the figure. 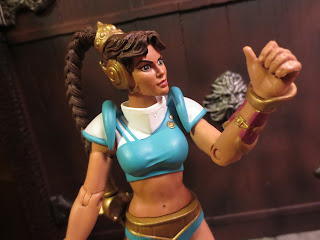 * Mara has nice clean paintwork and an awesome color scheme. I love the mixture of her blue outfit with the gold and pink highlights of her various bits of armor. She's definitely a figure with a standout color scheme and she looks awesome mixed in with the other Galactic Guardians. 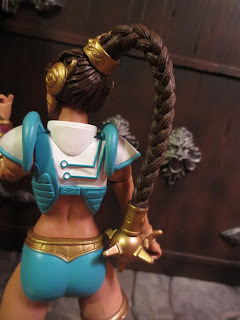 * To reflect both her look later in the New Adventures of He-Man series and the action feature of the prototype figure, Mara has her long ponytail with a spiked tip. The idea for the vintage prototype action figure was that Mara's ponytail could whip around and be used as a weapon. Mattel has captured this here by giving Mara the ability to have a ponytail of two different lengths. The spiked tip on the is removable so that an extension can be added. Here's Mara's basic ponytail that reaches her lower back, much like her appearance in the cartoon. 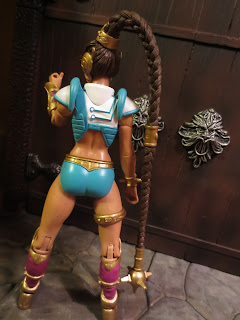 *And here's the extended ponytail. The second braid simply attaches on and the spiked ball fits on the end. It's a cool little feature that works well and gives the figure a few different display options. I'm always a fan of interactive elements such as this. 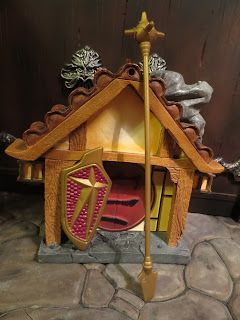 * Mara comes with two really nice weapons: A shield and a staff. The shield is similar in design to the one that was supposed to come with the vintage prototype figure. It clips on her forearm and looks great. I like the gold and pink mixture and how it blends so well with the color scheme of her outfit. The staff is also a great weapon. It has a blade on the bottom, a spiked ball on top, and it's really durable. She can hold it with both hands and cause some incredible damage against the Space Mutants! 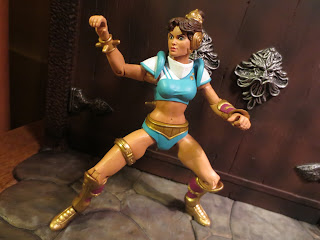 *Mara's articulation is tight, durable, and just fine, but it is a bit disappointing that she's missing the swivel thigh joints that other female figures have. I guess the decision was made to ax this joint since she has so many new parts, but it's still a bit disappointing. 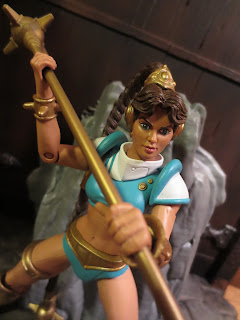 While I'm not the biggest fan of the show (and a lot of that has to do with the voices) I do like the concept and action figures from The New Adventures of He-Man. In fact, I would probably say that the NA figures have ben some of my favorite figures in the line. Mara of Primus is another solid hit: She's an excellently designed and sculpted figure with a cool feature (her ponytail), great accessories, and an overall excellent look. I wish she had a bit more articulation such as thigh swivels and such but she's still plenty functional and capable of taking on some great poses. She's a character who fits in just as well with the Galactic Guardians as she does the Great Rebellion or the Heroic Warriors. If you skipped Mara just because you're not a New Adventures fan, you definitely might want to reconsider as she's a fighter who ca keep up with the men and women of any other MOTU faction. Definitely another Great figure in the 2015 MOTUC line!