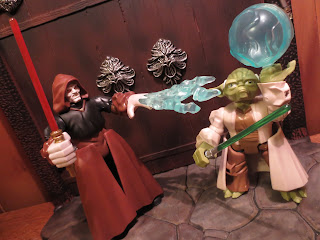 Today I'm looking at the third and final two-pack of the first series of Star Wars Hero Mashers: Yoda Vs. Emperor Palpatine! Based on their duel from the end of Revenge of the Sith this set includes a number of Force effect hands which can be swapped out in place of the more basic hands. I'm all about the idea of including Force effect hands, but a problem I have with this set is that all of the Force effects are permanently attached to the hands rather than using the peg and port system that's already in place. That's a complaint I have with a couple of sets in this line but it seems more pronounced here. Still, Yoda and Palpatine are significant characters and everyone will surely want to add these warriors to their collections, right? Well, read on and learn why wars not make one great after the break... 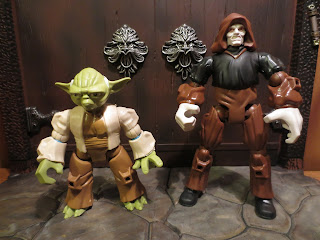 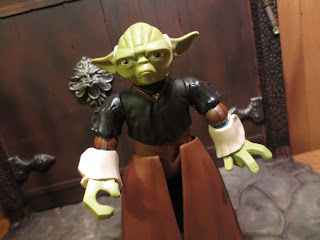 * The mashing is always a blast with these guys, even if the designs don't make a lot of sense. Want Yoda to upgrade his robes? Done. Want to make a short Kit Fisto using Yoda's body? Go for it. Want to make a casual day Sheev Palpatine in a laid back smuggler's outfit? You have the power! The mashing feels durable and it's easy to change things around. 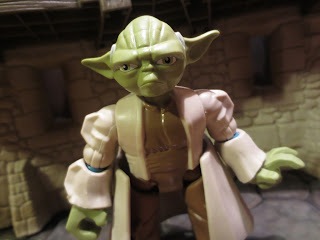 * I like Yoda's sculpt. While he's not as small as he technically would be, for a line like this that's not a huge issue. He's really fun and reminds me quite a bit of the Clone Wars Yoda. He has a very determined look on his face and his body looks like he's ready for action. There is no cane included for this Yoda! His robe attaches to the ports in his back or extra stability. 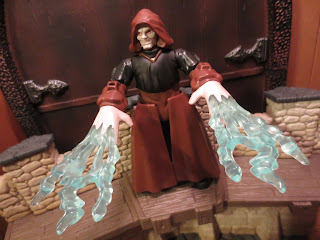 * I definitely am digging these alternate Force lightning hands that Darth Sidious is rocking. They're wicked looking and really create a nice dynamic effect for displaying the figure. I will say that I had to look through a few sets to find one where the paint on the hands wasn't completely atrocious but I did fine one. 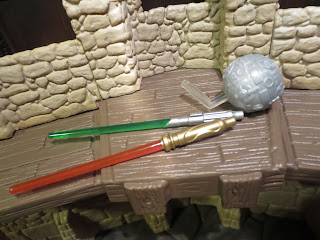 * In addition to Force effects and their robes, Yoda and Palpatine come with their lightsabers and a Jedi training remote. The lightsabers are perfectly fine and par for the course for what I've come to expect from this line (Yoda's is the same length as Palpatine's) but the training remote is a cool little extra. It's attached to clear plastic bar that can fit into the ports on any figure. Hey! This is a great accessory because it's versatile! I wish the Force effects were done more like this. 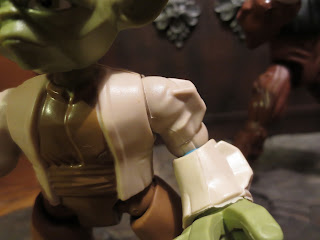 * I'll be repeating this over and over but I'm still not pleased that the shoulders don't have swivel/hinge joints. This really effect this set as Yoda's Force effects almost require him to have those joints in order for them to work properly. You'll see what I mean below... 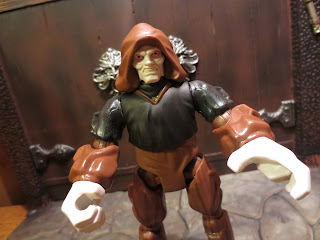 * I have to say that I'm not a fan of Palpatine here. I can't quite put my finger on it but there's something really off about this sculpt. It feels very messy and segmented. To be honest, I can't remember the last time I was happy with a Palpatine sculpt on a Hasbro product. Call him Sheev Palpatine, call him the Emperor, call him Darth Sidious; I don't care. I just want a good figure of this character! 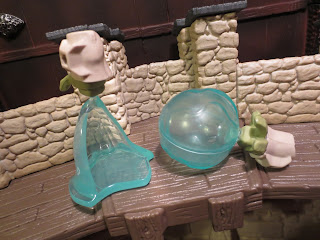 * I love the idea of thee Force effect pieces but both of them have some serious flaws. The one on the left seems like it is intended to allow Yoda to stand his head or something. If Yoda has swivel/hinge shoulders this would be amazing, but without that articulation there is no way to achieve the balance needed. The orb looks cool but it seems like it's in danger of breaking off. Why not make it a separate attachment like the Jedi training remote? This line has some cool ideas but needs to work on the execution of them. 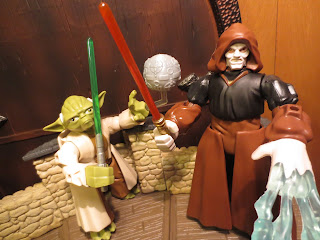 There are a number of things I like about this set but overall there are just too many drawbacks. I'm not liking the Palpatine figure (although Yoda is quite good) and I find Yoda's Force effects to be extremely problematic and useless (although Palpatine's are quite good). At the end of the day, I do think this is the most forgettable set of what has been released so far. While I doubt collectors of this line will want to skip having a Yoda and Palpatine in their collections, if you're a casual buyer looking for a starter set this should probably not be the one you pick up. This one gets an Eh and a 1/2 from me.

I haven't reviewed any other figures of these specific characters on this site, but I have reviewed a couple of other Hero Mashers sets including:
Star Wars Hero Mashers by Hasbro (2015)
Han Solo Vs. Boba Fett
Jedi Speeder & Anakin Skywalker

And so far as other Star Wars figures go, I've reviewed: