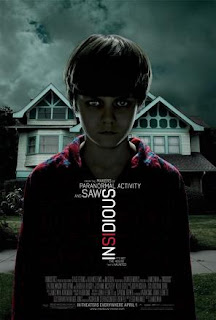 I originally wrote this review in August of 2013 for ThEpic Review.

Insidious was a movie I had wanted to see, but somehow it just passed me by.  When I was intrigued by the trailer for the upcoming Insidious: Chapter 2, Brad told me that I had to absolutely watch the original.  I'd heard great reviews of the movie from a number of folks with quite a few people telling me they thought it was one of the scariest movies they had ever seen. After seeing (and loving) director James Wan's The Conjuring, I knew I had to track this film down.  I guess I am a fan of James Wan's directorial horror efforts, as I enjoyed the original Saw, the somewhat silly but fun Dead Silence, and of course The Conjuring.  So, what did I think of Insidious?  I'll get into a slightly more spoilerish review after the break, but I will say that I enjoyed the movie.  I didn't, however, find it nearly as scary as so many people have made it out to be (for my money, The Conjuring was a much more frightening film).  For most horror movies, unless there's some relevant history, I think viewers are best going into the theater with as little information as possible. Since you've probably heard a bit about Insidious by now, as the movie came out in 2011, I will say that I felt the movie was more of a blend of horror and dark fantasy rather than just a straight up horror film.  It also reminds me quite a bit of Poltergeist, which always earns a film a few points.  It's got good performances, especially by Patrick Wilson and Rose Byrne, and manages to pull a few surprises.  If you're looking for a good haunted house movie that's more psychological rather than visceral, it's worth looking into. More detailed thoughts (and some spoilers) after the break......

So it turns out Insidious does do a few things that help it to stand out from the pack. First, it's not a standard haunted house movie, possession, or poltergeist film.  It deals with astral projection.  Josh and Renai Lambert (Wilson and Byrne) have just moved into a new home with their two young sons and infant daughter. Very mild and bizarre occurrences largely go unnoticed until their son, Dalton (Ty Simpkins from Iron Man 3), goes up into the attic and confronts some evil and unknown presence. He falls and bumps his head, leading his worried parents to put him to bed. The next morning they find him in a medically unexplainable coma. Soon, Renai begins seeing and hearing strange things around the house. Things get so bad for the Lamberts that they move to another house, only to learn that the strange happenings are not "hauntings" but the presence of otherworldly entities trying to gain entry into Dalton's body, who it turns out is a gifted astral projectionist who has gotten lost in a shadowy realm called "The Further".
I can't really say that I remember any horror movie using the concept of astral projection in such a way, so it certainly felt fairly unique.  "2 points for Insidious," I shout, in my best Dumbledore voice.  Secondly, the movie completely eschews the "less is more" rule for haunted house movies (granted, I did just say this wasn't a haunted house movie) by actually showing us the entities haunting the family.  While this might have contributed to me feeling not as creeped out by the movie as some of the designs are more fantastical rather than horrific, it certainly does help the movie to stand out amongst other similar films that never show anything. The designs of the "entities" are quite interesting and well thought out. Subtle things such as having an older man play an old woman or having a very small man play a boy definitely give the entities an odd feel, as something in your mind tells you that something isn't right about them, but you can't put your finger on it.  The main entity, while memorable, definitely kept reminding me of a cross between Darth Maul and Buffalo Bill from  The Silence of the Lambs.

Insidious did not blow my mind or linger there like The Conjuring did, but it's certainly a well made and enjoyable film.  It's solidly directed, features a nice mix of atmospheric, visual, and "jump" scares, offers an engaging story with a few humorous elements to break things up, and includes characters and situations that most viewers will be able to relate to and empathize with in some way.  James Wan certainly has a talent for horror films, and I'm definitely anticipating Insidious: Chapter 2 which opens September 13th, 2013.  I actually think I'm glad there's a sequel, as the way this movie ended didn't satisfy me. It's a shock ending, which the majority of the time I hate, but since we're going to get to see how things continue, I'll probably stick around for a bit, but I'll be looking over my shoulder. Just in case.