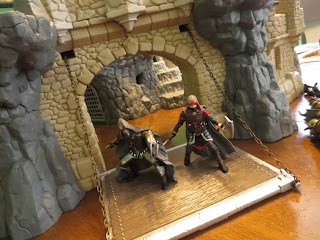 Today I'm looking at something a bit different: The Big Knight's Castle from Schleich. Schleich is a German toy company that produces plastic miniatures and toys which can be found in many stores in the United States including Target, Toys 'R Us, FAO Schwarz, and various other independent toy stores that sell "higher-end" product aimed at kids. While Schleich does sell product based on the Smurfs and Snoopy their main focus is on more generic characters such as knights, elves, and animals. The castle I'm looking at today was released in 2014 and is intended for use with the knights sub-line. It is quite massive! While the retail price on this item is around $150, I ended up waiting around until I saw one on Amazon for around $60, which is a real steal. I'm structuring this review a bit different than my standard figure reviews as I'll be showing off each piece of the set along with some images of the playset's compatibility with some other figures from different scales. Ready to invade the Big Knight's Castle? Then join me after the break... 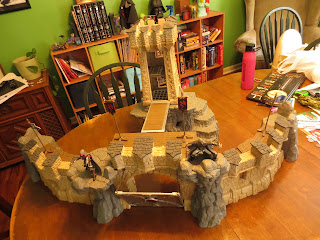 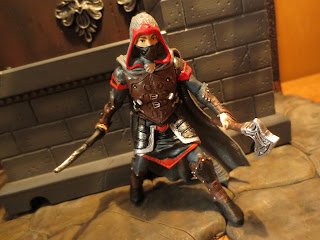 This is a cool looking figure. The paint's a little messy in spots but overall he looks quite nice. His ax is wicked looking! 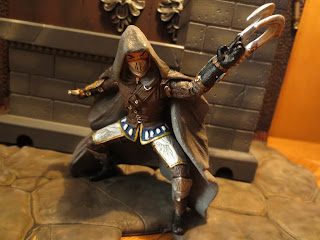 I love his claw but the knife in his left hand is bent out of shape. His armored mask is rather fearsome looking, though. He really looks pissed. 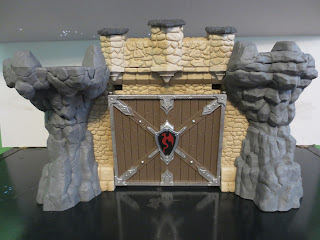 *The drawbridge housing is about 11 1/2 inches tall and 18 inches long. The stone pieces are removable in case you don't want to use them. The quality of the plastic is excellent on this set for the most part. The castle walls themselves are a thick, sturdy plastic while the stone pieces are durable but hollow. 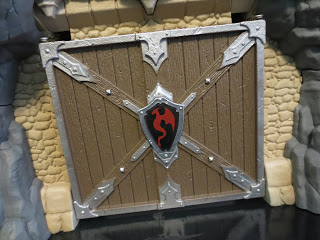 * The crest on the drawbridge is removable and reversible. One side has an image of a griffin while the other has the image of a dragon. You ca switch them around to show who is currently in charge of the castle (the tower door also has this feature). The bridge has a nice wooden grain to it and the metal pits are cleanly painted. 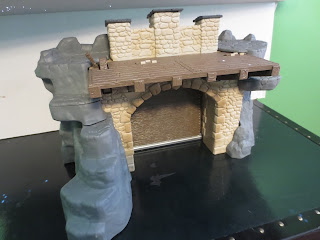 *The back of the gatehouse shows off the stone steps leading up to the castle walls and the wooden floors up top where you can have your troops standing. You ca see that while the castle wall pieces fit together perfectly, the stone pieces here have some visible separation. 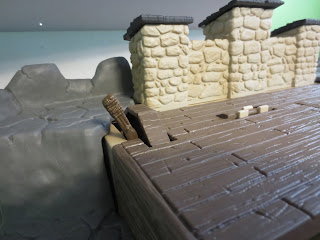 *This handle allows you to drop the drawbridge while the wheel next to the handle allows you to raise it. It's a nice feature that works quite well. There's a hinged floor here that allowed you to see the chains wrapping around their spools. If something gets stuck, you can easily go inside and fix it. 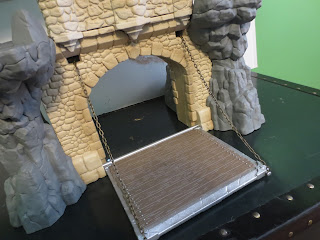 *And here's the drawbridge! The chains are actually metal! They look really nice and give the set a very high quality feel.

The stones of the castle walls have some nice paintwork on them. Various colors give the walls much more depth than just the colors they are molded in. 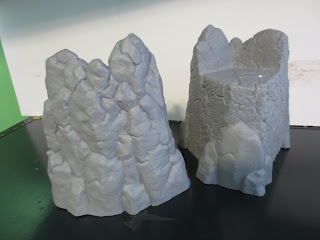 *The set comes with two stone walls. These can be used to attach together the two regular castle walls that come with the set. They're both identical and have some nice sculpting. They're made from a softer plastic that feels rotocast, but they're sturdy. The various pieces of the castle don't attach but merely sit side by side. 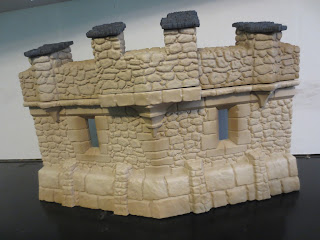 * The castle comes with two of these walls. They're each about 8 1/2 inches tall and 13 1/2 inches wide. They sculpt and plastic quality is excellent. They have a bit of a curve to them so that they begin to form a semi-circle around the castle keep. 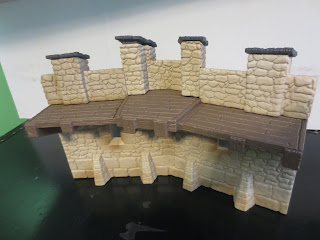 * Here you can see the walkway behind the walls. As I mentioned above with the stone walls, these do not attach to anything. You simply place them together. It works fairly well and does make rearranging things easier (it's be quite cumbersome and probably have more breakage problems if they attached). I guess if you bought more castles you could keep building with these. It'd be nice if you could buy the walls separately, though, to really expand the castle without needing multiple drawbridges. 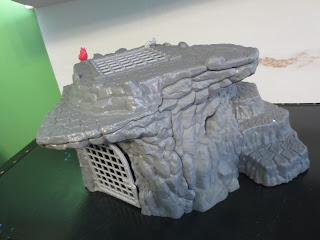 *This is probably my favorite piece. It's a pain to assemble but it stays tight. It can function as an excellent backdrop for action figures by itself or it can be used in conjunction with the castle. It doesn't attach to the walls but simply sits beyond them. 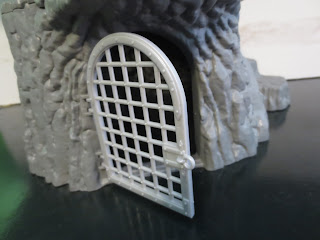 *The interior is hollow and can be accessed through this door. It feels sturdy enough and easily opens and closes to access the interior. 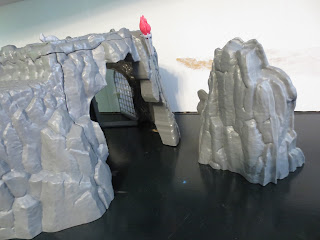 *There's also a secret entrance. I guess you can use this to escape from the dungeon or it opens to allow easier access to play underneath. The rock piece is neat and also makes a nice backdrop or accessory. 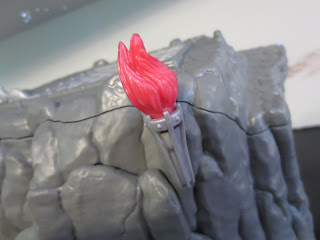 * Here's a torch. I wish the flame were translucent as a simple red flame is a bit lame. Still, this is no ordinary torch. Twist the torch and the trapdoor on top activates to drop enemies into the dungeon. 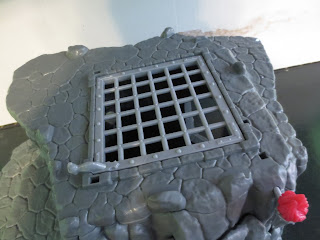 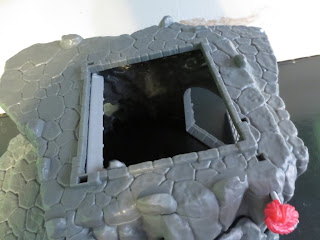 * And here it is opened! 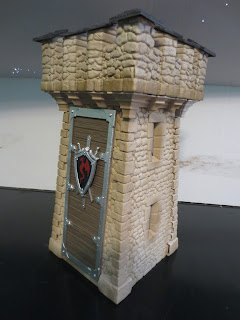 *The tower is around 13 inches tall and is designed to stand atop the dungeon/ tower base (which makes it 21 inches tall). It's a gorgeous piece and features plenty of windows, excellent stone sculpting, and a drop down ramp. 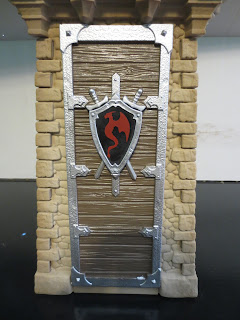 *The ramp features a crest that is reversible (like the drawbridge) and can drop down to allow access to the inside. It also functions as a walkway from the top of the drawbridge gate housing to the tower. 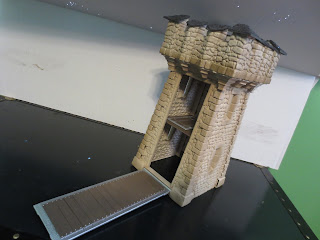 *You can see the bottom floor (which is usally over the dungeon grate) and the middle floor (which has an opening access door on the floor). It's cramped in here but you can fit figures inside. 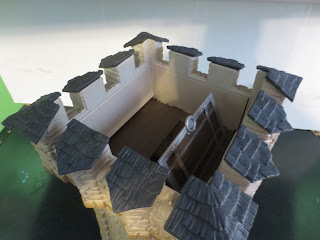 *Here's the top of the tower. Any figure standing up here is well protected and can climb down into the tower through the opening hatch. 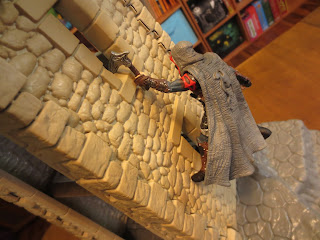 * I haven't talked much about the figures, but one of the cool things about them is that they each have a hooked weapon (ax or claw) that allows them to climb up to the top of the tower via the windows. It's a neat little feature. 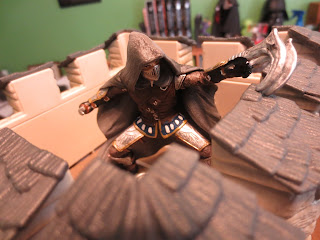 *There is a lot of playspace in this playset. There aren't too many "features" like many other playsets, but the amount of room that can be used to store figures is quite nice. 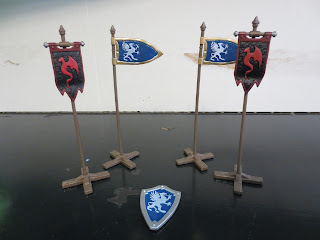 *The set comes with four flags and three crests (one crest is an extra). The flags either feature a dragon or a griffin). They're mounted on removable bases and have some nice detail work on them. 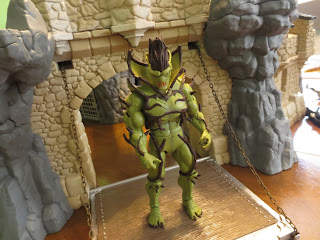 So, who can use this castle? While you can definitely use individual pieces as backdrops for a variety of figures, it's definitely a bit small for most larger lines like Masters of the Universe Classics or Toy Biz's Lord of the Rings. Things don't look bad at a glance but give it time and soon you'll realize that these characters could clamber over the walls. 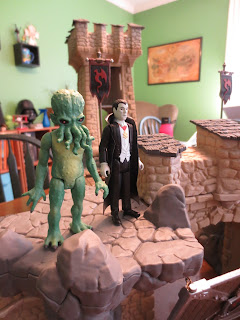 I really like using the playset to display my various retro action figures. There's plenty of room for these guys to chill out. The Big Knight's Castle doesn't feature many fancy play features like some playsets do. It is, though, extremely versatile. It takes up a lot of space and is definitely going to be challenging to find a place to set it up on display. Still, this is one of those playsets that you know a kid would just love to plop down in their floor and spend hours with. For collectors or photographers, this can either be a massive playset a set of 5-6 excellent backdrops and diorama pieces for an inexpensive price. If you get this for $60 bucks, it's easily a Epic deal. Otherwise, I'd say this is a Great and a 1/2 set. Just keep an eye out for the best bargain you can find and you'll be much happier!


I've reviewed a couple of other castles on Action Figure Barbecue:

The Vampyre Castle from Lego's Monster Fighters and the Masters of the Universe Classics Castle Grayskull by Mattel.
Posted by Barbecue17 at 9/11/2015