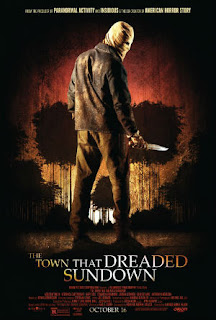 Movie Thoughts by Barbecue17
The movie I watched: The Town that Dreaded Sundown
It was directed by: Alfonso Gomez-Rejon
It was released in: 2014

Please briefly summarize the plot: In the 1940s a masked killer known as the Phantom stalked the streets of Texarkana but his identity was never uncovered. In the 1970s a film was made of the murders, The Town That Dreaded Sundown, and it has since become a Halloween viewing tradition. In 2013, however, the Phantom returns and begins his killing spree anew. Using the 1970s film as a basis for his murders, the Phantom terrorizes the town and stalks Jami Lerner, a victim who the Phantom let escape with a cryptic message. Delving deeper into the town's history and lore, Jami attempts to find some clue as to the identity of the masked maniac terrorizing the town.


How is this film culturally/ historically significant?: This film is a remake, but it's a remake that pretends that the original film is an actual film in the movie's universe that was based on actual events. Of course, the original film is also called The Town that Dreaded Sundown and was directed by Charles B. Pierce of The Legend of Boggy Creek and Boggy Creek II: And the Legend Continues fame. really was (loosely based on real events).


What genre would you place this film in? Horror/ Slashers/ Masked Maniacs

How did this film make you feel: The Town That Dreaded Sundown is one of the more enjoyable modern slasher films I've seen. It's not as suspenseful as some slasher films (you have a pretty good idea when the Phantom is going to attack) but it's a bit more entertaining due to the oppressive small town environment and the fact that we're accompanying Jami as she is uncovering more about the town's past. While small towns usually feel warm and inviting, TTTDS manages to make it feel remote and secluded. Plus, the movie takes place over a few months, not just one night, so you really feel the anxiety build within the community as the tension takes its toll. The killer wears a fairly simple outfit and thus you'll be looking at everyone you encounter with a suspicious eye.

What were the most impactful moments of the film? Any of the scenes where the Phantom kills his victims are pretty rough and definitely leave a mark. They're not completely gratuitous but they still manage to be quite violent. The Phantom uses a variety of weapons: Pistols, arrows, a Bowie knife, and even a knife attached to a trombone, to kill his victims. There are also a number of scenes that definitely emphasize how deserted a small town can be at night which serves to make it a more terrifying backdrop for the film.

With what other movies would you compare this film? Slasher films like Friday the 13th parts 2 and 3, Halloween and Halloween 2, Black Christmas, and the Scream films all come to mind.

What stands out about this film? Anytime the Phantom appears you're in for an intense scene. There are a number of decent actors in the film (more than you'd expect from a slasher film) and Addison Timlin as the hero/final girl does an excellent job. Anthony Anderson's Lone Wolf Morales also adds some humor an an interesting outsider's perspective to the happenings. The way that this film creatively used the original film in the plot was quite brilliant. I'm not sure I've seen too many other films utilize this tactic but I think it really worked. It was a great way for the film to allude to certain things that could happen in a logical way. To go even more meta,  I also liked Denis O'Hare's role as Charles Pierce, Jr., the son of the original film's director. It really sells the concept.

What message do you believe the filmmaker was trying to convey? Be careful about exploiting tragedies, always make sure you have the real killer (and not just a scapegoat), go to college, and don't hang out in cars on abandoned roads.