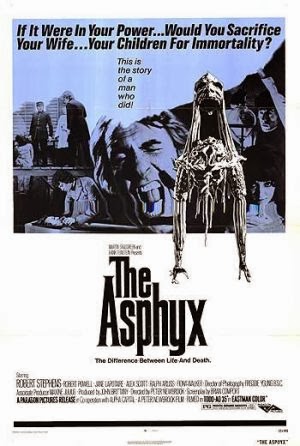 I originally wrote this review for ThEpic Review on March 3, 2014.

When you watch a film dealing with immortality, a good number of questions usually arise. What would you use it for? How would your body handle the aging process? What about severe trauma and injury? If you were immortal and fell into a wood chipper, for instance, what would happen? Would you just be a miserable pile of specks for the rest of your days? Would your consciousness rest in one speck or as a collective in multiple specks of your severed brain matter? I'm not really sure that the 1972 British horror film The Asphyx really answers any of these questions, but it does kind of ask them. Well, maybe not the questions regarding the wood chipper. In The Asphyx, director Peter Newbrook presents a Victorian tale that examines the importance of certain significant factors in our lives: family, science, humanitarianism, and Greek death spirits. If I had to compare The Asphyx to some other films, I'd say it's kind of a cross between The Man They Could Not Hang mixed with Ghostbusters, if that particular amalgam were written by Charles Dickens. Curious now? Then read on and learn about The Asphyx; a film that strove for greatness and missed it, but still managed to be pretty good.....

Sir Hugo Cunningham (Sir Robert Stephens) is your typical likable Victorian gentleman; he adopts orphans, has a passion for social justice, is extremely well dressed at all times, is a widower, and dabbles in spirit photography and science. In fact, he has actually invented his own early video recording device. Sir Hugo presents the evidence of his spirit photography hobby to a bunch of other dudes who are also part of a this Victorian era Midnight Society. While taking pictures of the dying, Sir Hugo has noticed that there always appear to be a peculiar image appearing next to the body. Multiple camera, multiple photographers, and mulitple film development methods always produce the same result, leading Hugo and his colleagues to hypothesize that this blur represents the human soul leaving the body.

But is it really something more?  One day while boating with his fiancee, his adult son and daughter, and his ward, Giles (Robert Powell, who totally looks like Bob Dylan), Sir Hugo decides to break out the homemade video camera. While filming his son and fiancee rowing past a tree, what could have been the earliest submission for England's Funniest Home Videos instead becomes tragic as Sir Hugo's son hits his head on a tree branch and his fiancee ends up drowning. Overcome with grief, Sir Hugo becomes obsessed with his photography hobby and upon viewing the video recording of the tragedy, he finds the mysterious blur present. It isn't departing from his son, however, but coming towards him prior to his fateful encounter with a tree limb. Perhaps the being is actually an asphyx, a personal spirit of death that approaches a person to bring about their death when the time is right.

Using "science," Sir Hugo creates a powerful light that can trap the asphyx. He is invited to film a public hanging in protest of capital punishment and so Sur Hugo takes this opportunity to use his giant light to stop the execution by capturing the asphyx and causing everyone to believe that an act of God is ocurring that proves the man's innocence. Soon, Sir Hugo begins speculating what would happen if he could permanently contain someone's asphyx. He embarks upon a path of mad experiements and manipulations in order to save humanity, but will he instead destroy his own? That's the question this film explores as Hugo continues to cross lines and push boundaries in order to try and preserve the life he feels he is in danger of losing. When he really gets into catching and containing asphyxes, the film definitely takes on a different tone that seems to be equal parts science fiction and horror.

There is quite a bit about this film that I like. The characters are certainly sympathetic, the script is well written, and the acting is solid. Honestly, I knew next to nothing going into this movie which was a real plus. The movie starts to unravel a bit during the last 20-30 minutes or so, but it still makes sense although some of the character interactions at this point feel a bit forced. While I don't know that your average moviegoer is going to have a lot of interest in a 40 year old low budget British horror film they've never heard of, this seems like the perfect film to break out and watch with with someone who isn't a big horror fan but wants to watch something a little off the beaten path. Watching it, I'm really curious if Dan Aykroyd or Harold Ramis were at all familiar with this film when they were writing Ghostbusters. There definitely seems to be some similarities in the capture and storage of the asphyx as well as in the way that the spirit is portrayed. I love the look of the asphyxes in this film. They're really creepy and fun. Honestly, that connection to Ghostbusters alone is enough for me to recommend this film to you.