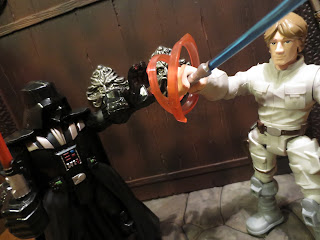 In my review for Boba Fett and Han Solo, I stated that there probably wasn't a better Star Wars combination for a two-pack. Thinking about it, I'm willing to admit that I'm wrong: Darth Vader Vs. Luke Skywalker is definitely the ultimate 2-pack so far as Star Wars figures go. This two-pack from the Star Wars Mashers line features Luke and Vader during their duel on Cloud City which is easily my favorite lightsaber duel from the Original Trilogy. Luke's Bespin outfit is also my favorite outfit he wears in the Original Trilogy (followed closely by his yellow jacket and brown pants from the ceremony at the end of ANH) so I'm glad to see it already featured in this line. This is another installment of my Force Friday hall from Toys 'R Us. Ready for a closer look? Then join me after the break... 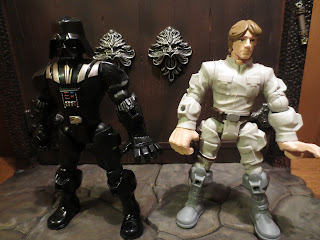 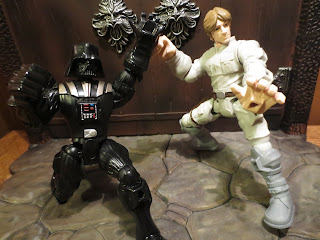 * These figures are fun, fairly well articulated, and durable. While the shoulders are far too limited, everything else works quite nicely. 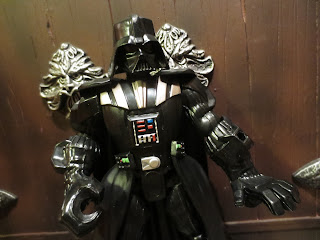 * This is a nice, stylized Vader. Looking at these I'm reminded of the Force Battlers that came out during the Episode III era. There are plenty of little details here and they're quite accurate to the film. Vader's cape and waist coat are removable so you can add them to other characters if you want. There is a single carded version of Vader available but he has two minor differences. He has a different left hand and his cape has a chain on it. 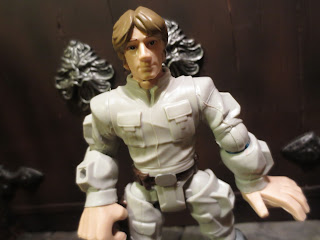 * Luke is decked out in the fatigues he wears on Dagobah and Bespin's Cloud City. Everything is pretty well in order here so this is definitely early on in his fight with Vader. This outfit always looks awesome. The Luke Skywalker likeness isn't bad, either. It's not a perfect likeness of Mark Hamill but it definitely looks like Luke. 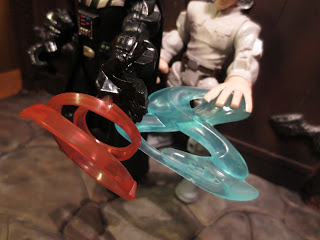 * I love the inclusion of the Force effects on these two separate hands/ forearms. Vader has a red spiral like effect that is fairly flexible, so it can wrap around a character's weapon to yank it away from them or around a character's neck to Force choke them. Luke has a blue, swirly Force push that he can use to knock back his foes. I love these as they're really, really fun! Definitely more fun than the goofy launching Force projectiles many of the 1/18th scale action figures have had. 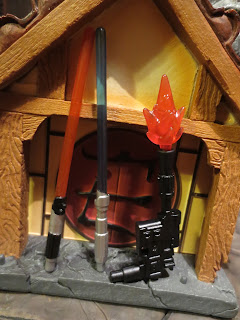 *Besides Vader's clothes and the Force effect hands, the set also comes with Luke and Vader's lightsabers (technically both belonging to Anakin, from a certain point of view) and a blaster pistol. The lightsabers are quite nice and I love that Vader's has a few extra paint applications on it to give it it's signature black and silver look. 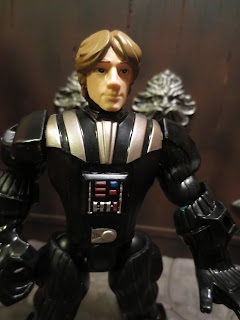 * The mashing is still fun here! Of course, the first thing I wanted to do was put Luke's head on Vader's body to make a lazy boy custom of Luke's vision on Dagobah. There's plenty of other stuff you could do, however. Want Luke to lose his hand? Then rip it off, baby. 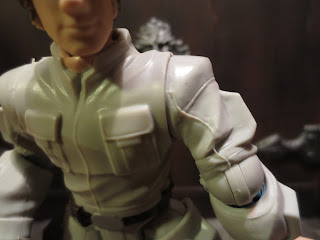 
*I'll repeat this same song and dance all throughout the first series of reviews of these guys: Why in the world do they not have swivel/hinge shoulder joints? That would really increase the articulation on these guys and make them loads more fun! 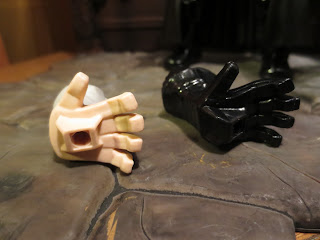 * I like the idea of the open Force hands but why do they have holes in them? That would make perfect sense if they had snap on Force effects but, so far, all of the Force effects have been permanently affixed to other hands. There really is a lot of room for fun to be had with swappable Force effects so I hope Hasbro pays a bit more attention to them in future releases. 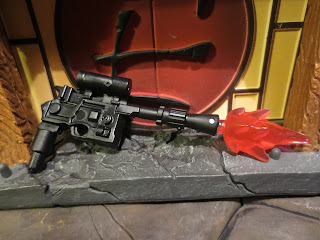 * My problem with the blaster pistol is the same problem I mentioned in the Han Solo Vs Boba Fett set: I love the look of the weapons and the blast effects but I really wish the effects were removable. Also, as mentioned above, while these figures have a peg and socket system similar to G.I. Joe Sigma 6, none of the pieces really seem designed to take advantage of it. Why not a peg on the side of the blaster to allow Luke to store it on his hip or on his back? 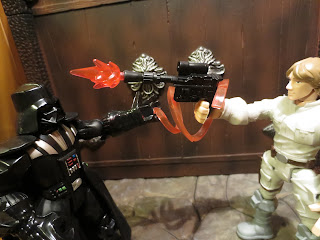 Luke Vs. Vader is another cool set. I'm really liking the Hero Mashers figures but this set definitely draws attention to two things that I wish Hasbro would do to improve these (that don't involve adding extra articulation). First, the Force effects need to be removable. It doesn't make sense for the Jedi and Sith figures to have "Force" hands if the Force effects can't be removed and used on other figures. Secondly, the lightsabers and blasters need to have pegs on the sides, not just on the bottoms. This would allow for characters to carry the accessories, thus taking advantage of the ports all over their bodies. Without these changes, those elements already in place are really rendered far more useless than they should be. Still, this is a Good and a 1/2 set and I guarantee it's more fun than most other Star Wars products you'll find on shelves at this point in time. Search your feelings. You know it to be true!
Posted by Barbecue17 at 9/28/2015