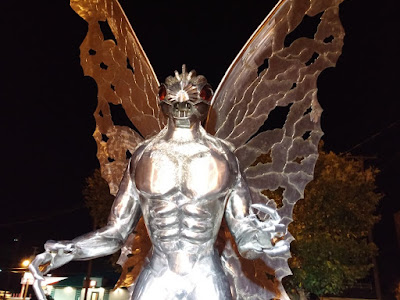 It's almost October! I'm so excited! Halloween is right around the corner and in just a few short days I'll be beginning 31 Days of Toy Terror! This is my 3rd year of this (two years over the ThEpic Review) and I truly think this is the best year of horror toy reviews! So much variety! Check out more cool stuff including my visit to the Mothman Festival, my thoughts on female action figures, Star Wars: Lost Stars, and some cool, spooky podcasts I've been into lately, all after the break... 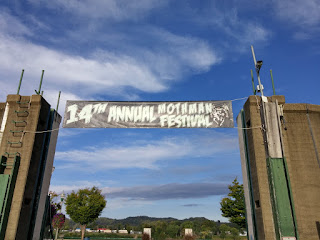 *I had an awesome time last weekend at the Mothman Festival in Point Pleasant, WV! I've been a huge Mothman ever since reading about him in Disney Adventures Magazine back in the early 90s (quite possibly this Halloween issue from 1991). I've been to Point Pleasant once before in late November of 2013 but this trip was lots of fun because we were there for the second day of the festival. Thanks to my father for snapping the pictures from the trip that I've used here. 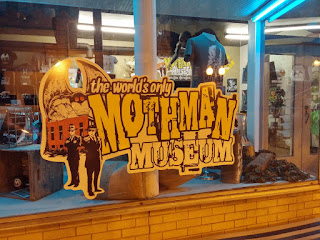 I saw lots of sights, finally went to the world's only Mothman Museum, did a bit of geocaching, visited with a Mothman cosplayer, ate a Mothman burger, stayed at the historic and haunted Lowe Hotel, and bought some cool Mothman stuff. Here's what I bought: 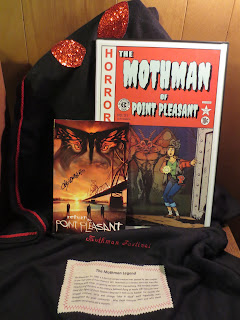 * A Mothman blanket: It's a black fleece blanket with red trim that features the Legend of Mothman and the words "Mothman Festival" embroidered on the blanket. Oh, and it has red, spooky, glittery eyes! Awesome!

*A graphic novel, Return to Point Pleasant. It's autographed and everything!

* A framed art print: It looks like an old EC Comics cover but it's called "The Mothman of Point Pleasant." I love the retro comic styled art on here!

* Anyone just interested to see what Mattel is going to do with the toyline since the new Ghostbusters film has all female leads? I've just been thinking about this lately as toy companies seem so reluctant to make female action figures unless they're marketed towards adults. You'll see some female wrestling figures and superheroes shortpacked in a collector targeted line at retail but that's often it. I'm also really curious what Hasbro plans to do when Captain Marvel gets her own movie (considering they almost completely ignored Black Widow in their Age of Ultron products) or what Mattel will do for Wonder Woman in the DC films.  Hopefully we'll see robust assortments of toys for kids of all ages that feature male and female heroes. 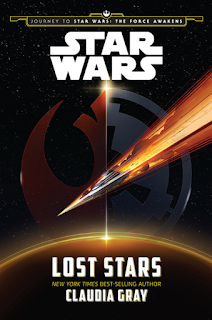 *I finished reading Lost Stars by Claudia Gray. It's another Star Wars book in the Journey to Star Wars: The Force Awakens range that was released on Force Friday. It's marketed as a young adult novel but I have to say that it completely help my interest as I read it in under a week. It's a fast moving story that spans about fifteen years in the lives of two friends caught on both sides of the events of the Original Trilogy. It's definitely worth picking up. So far, I think it's probably the second best book in the new canon. I'd rank them from favorite to least favorite:

*Since I did a lot of driving last weekend, I loaded up my 10 year old iPod with a few podcasts. Anything Ghost is an excellent personal podcast where the host, Lex Wahl, reads personal ghost stories and paranormal experiences shared by listeners. Sometimes there are also audio clips of stories told by listeners to mix things up a bit. There's also great background music and audio effects that really enhance the moody atmosphere. The show has been around since 2006 so there's a huge backlog of older shows to listen to. I listened to the three most recent episodes and enjoyed getting creeped out by them!  I also listened to the Halloween Haunt, a fun series that features tons of short podcasts on a variety of topics. While each one is only 4-7 minutes long, the variety is incredible! In 30 minutes you could hear horror movie reviews, ghost stories, lists of the most popular Halloween costumes from the previous year, or learn the history behind Halloween, various creepy historical figures, or terrifying phenomena. The host is quite funny with a dry sense of humor and a perfect horror host voice. Check both of these excellent shows out for some fun scares!